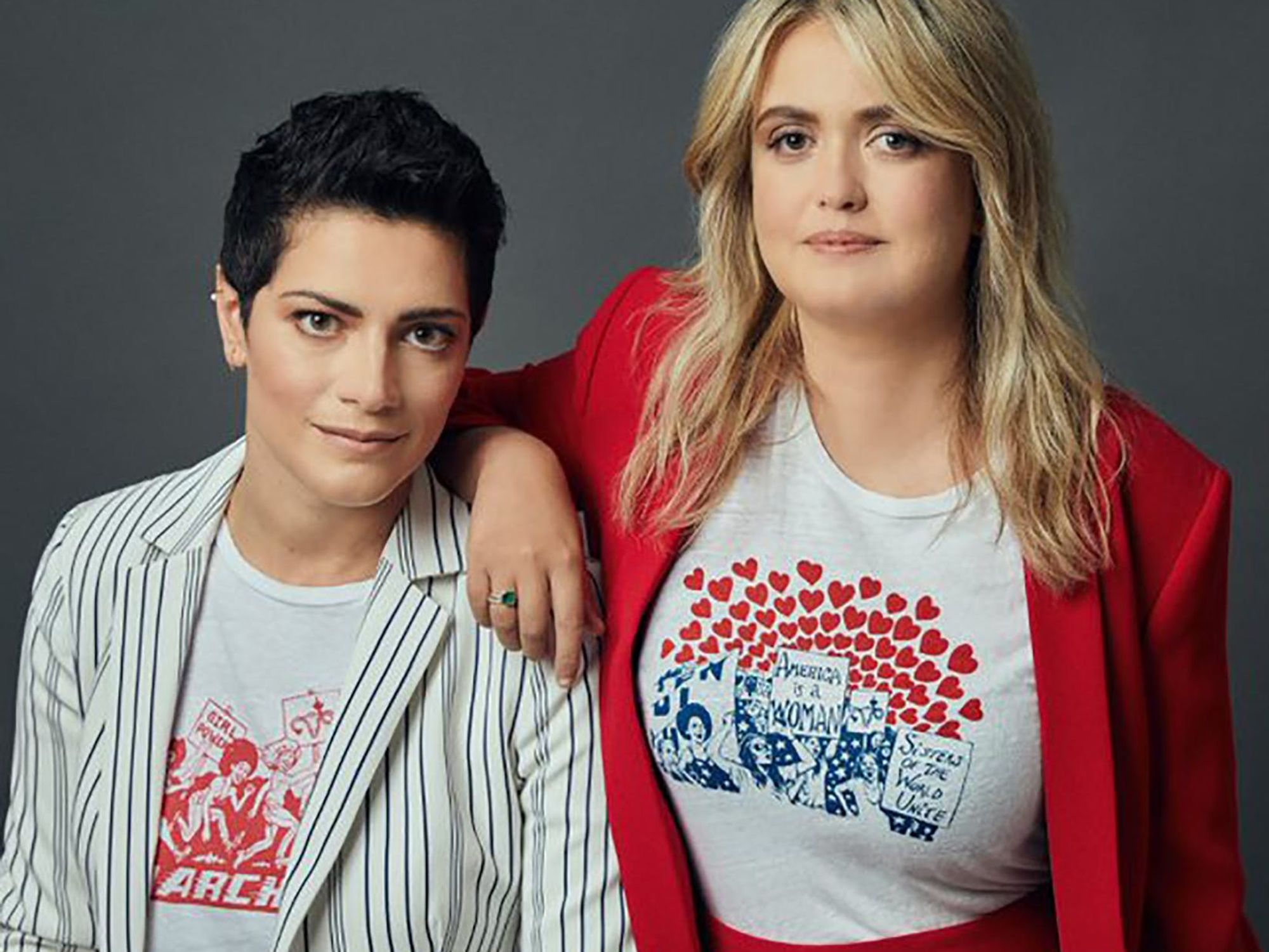 At first glance in the kids’ book aisle, good female heroes can be hard to find, especially when it comes to stories geared toward young girls. That’s why authors Francesca Cavallo and Elena Favilli set out to create a new type of kids’ book, based on real female trailblazers and historical figures, from all walks of life, all cultures, and representing a variety of professional fields. Praise hands emoji for Good Night Stories for Rebel Girls.

From Jane Goodall to Ruth Bader Ginsburg to Malala Yousafzai, this empowering collection of stories is designed with enlightened kiddos (and grown-ups) in mind.

Anjelika Temple here, Founding Partner and Chief Creative Officer at Brit + Co, mom to fiesty little Anokhi, and at-least-weekly reader of Good Night Stories for Rebel Girls. I first came across Cavallo and Favilli’s inspiring tome while on maternity leave, strolling through the aisles of a book store hoping my little girl would stay asleep. I was immediately drawn into the gorgeous illustrated portraits on each page and short one-page stories of dozens of incredible women. And just a couple weeks ago, I had the privilege of being connected with the two authors behind this book! In this edition of Creative Crushin’, I’m excited to share all about authors Francesca Cavallo and Elena Favilli, and what inspired them to launch a movement in the form of a book.

Brit + Co: Let’s kick it off with the basics. Tell us a little about each of your backgrounds.

Francesca Cavallo: We were both born in Italy. I was born in a small town in Southern Italy, by the sea.

Elena Favilli: And I was born in a tiny village in Tuscany. Growing up, I was the only kid in town.

FC: I, instead, was part (I still am) of a huge family, with lots of cousins, uncles, aunts… I moved to Milan for college and I studied theater — that is where I started my career as a director and a playwright.

EF: I attended college in Bologna and at UC Berkeley, I graduated in Semiotics and started my career as a journalist. We are currently based in Los Angeles.

EF: We met in Milan in 2007. I went to see a theater production of Francesca’s Academy of Dramatic Art and she was in a costume, playing a Cecenian warrior from the XIX century. I was hooked!

FC: We started talking then, and we have not stopped yet.

B+C: What were your “day jobs” before you decided to take the plunge and go into business together?

FC: Before moving to the United States, Elena had been working as a journalist and I was a stage director and playwright.

EF: After moving to LA in 2012, even though we were spending a lot of time developing Timbuktu, I had to take up consulting and Francesca wrote horror stories in the form of text messages just to pay the rent on our small apartment!

B+C: What gave you the courage to dive in and take a chance on your own vision?

EF: We both come from families with strong women. Our mothers have always been our strongest role models, and our grandmothers too, so we understand the value of having role models who look like you.

FC: We wanted to give that to little girls worldwide. If we couldn’t take a chance on our vision, how could we teach other girls to do the same?

B+C: What led you to write Good Night Stories for Rebel Girls? Gimme the the origin story.

FC: While working in the children’s media space, we witnessed from the inside how gender stereotypes still permeate books for children of all ages. Parents are offered little resources to counter this trend and they are especially concerned about the lack of strong female role models in children’s media. That’s why we decided to create this book.

EF: We started with a newsletter targeted toward people who were interested in female empowerment. The newsletter was called, “Who Framed Cinderella? Good Night Stories for Rebel Girls.” The response was phenomenal! The stories were written and shared through Google Docs, and subscribers kept asking for more.

FC: To grow the list of subscribers, we used the stories and artwork from the magazine to develop ebooks, and we started to ask our audience to share the stories they liked with friends and family. It grew from there!

B+C: What do you hope your book will inspire in young women?

FC: That girls can be anything they want. That they have the right to explore wildly, to be as ambitious as they want and that, as Wang Zhenyi said, "daughters can also be heroic."

B+C: You ran the most successful crowdfunding campaign in history. Serious props are due! Tell us more about the decision to crowdfund and what the whole experience was like.

EF: We originally focused the newsletter on our apps and magazine, but once we pivoted towards sharing stories, a high percentage of our newsletter subscribers jumped on board!

FC: That told us it could turn into a crowdfunding campaign. The idea of crowdfunding also excited us because we wanted the book to be female-led and community-powered.

EF: We used Kickstarter to raise funds to create the book. We chose Kickstarter because the aesthetic and traffic align with our brand. We worked for eight months on the campaign. We rewrote the script 16 times, and we continued to build a community interested in girls empowerment in the months leading to the campaign.

FC: Our original fundraising goal was $40,000, which was met in 30 hours. During the 29-day campaign, we raised $675,614 and then we continued on Indiegogo's platform InDemand, where it passed one million dollars. We were excited to see that our idea resonated with so many people. It is the most funded original book ever in the history of crowdfunding.

B+C: What advice do you have for people interested in taking their side hustle to the next level?

Favorite Quote: “The starry heavens above me and the moral law within me.” - Immanuel Kant

Trivia About You: I find pots, pans, and kitchen robots incredibly exciting.

Currently Reading: She Wants It by Jill Soloway

Favorite Quote: “Whereof one cannot speak, thereof one must be silent.” - Ludwig Wittgenstein

Trivia About You: Halloween is my all-time favorite holiday!

B+C: How do you choose which women to include in your stories? How long is your running list?! :)

FC: We wanted to feature women from as many countries as possible because children’s media productions don’t just lack diversity in terms of gender, but also in terms of race, sexual orientation, and religious background.

EF: We also wanted to feature women in as many careers as possible: We wanted to have trombonists, marine biologists, judges, presidents, spies, chefs, surfers, poets, rock singers.

FC: Finally, we selected women whose personal stories had something that could be particularly interesting for a child — for example, the fact that the famous chef, Julia Child, started her career as a spy, cooking shark-repellent cakes during WWII.

EF: There are over 500 women on the list currently, and growing daily! We take input from our staff, readers, and social media.

B+C: Tell us more about Timbuktu Labs and the types of projects you’re working on alongside Rebel Girls.

FC: We’ve just produced a companion product for the series, a feminist activity book called I Am A Rebel Girl, A Journal To Start Revolutions. You can pre-order it from our website today!

B+C: Who are some present-day female heroes that inspire you?

Whether you have kiddos in your life or not, this book is a gorgeous and inspiring collection of stories you might even want to read to yourself at bedtime ;) Keep up with all the projects these rebel women are up to by following @rebelgirlsbook on Instagram and on the Rebel Girls site.

I Am A Rebel Girl Journal (Pre-Order)

Know of any badass babes whose story we should share? DM us @BritandCo + @anjelikatemple and stay tuned for the next edition of Creative Crushin'.