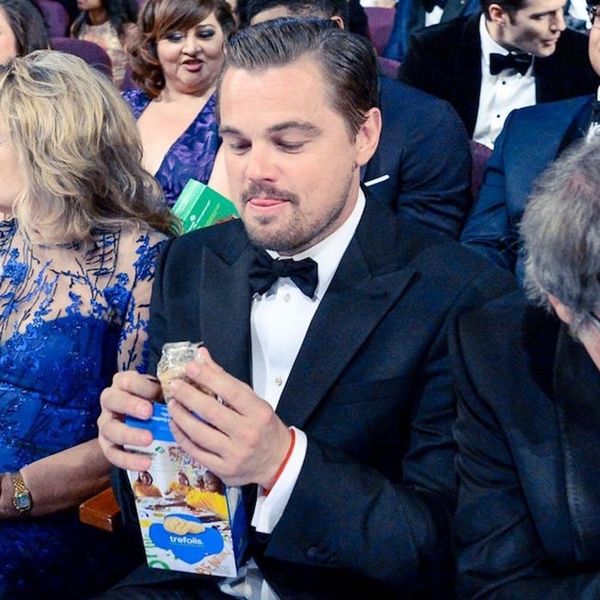 1. You’ve gotta love this entrepreneurial spirit! The Girl Scouts of Suffolk County, New York, put up an amazing poster encouraging people to buy their cookies because that’s what Leo did and, well, he finally won an Oscar! It reads: “This is Leo. Leo wants an Oscar. Leo buys Girl Scout Cookies at the awards. Leo wins an Oscar. Leo is smart. Be like Leo. BUY GIRL SCOUT COOKIES!” The post on their Facebook page has been shared almost 20,000 times, and ABC News has confirmed that the sign worked and sales increased. “We completed a lot of badges with our cookie money, and we do many community service projects such as perform for the local convalescent home, food drives, planting projects and holiday tree decorating at the local park,” nine-year-old Girl Scout Molly told them. “My favorite community service has been working at the food pantry where we sort food and stock shelves.” (h/t ABC News)

2. Are Avril Lavigne and Chad Kroeger back together? We’ve been watching this one since the holidays, when these two Canadian rockers started popping up in each other’s Instagram feeds. Then, the estranged spouses attended Grammys parties together. Now, they’re clearly in the studio together. Avril posted the above pic with no caption, but the commenters are more than taking care of that for her — speculating on a reunion, hating on them both or telling everyone else to chill out, they’re just friends. At the very least, they’re definitely still making music together. #Chavril forever.

3. This little boy dive-bombing his aunt’s poofy wedding dress as she walks down the aisle is our hero. Try not watching this one on loop today and laughing! The sister of the bride told Buzzfeed that he did it simply because it “looked like clouds.” Literally same. (h/t Buzzfeed)

4. Daisy Ridley shut down body shamers so hard with this Instagram essay. Welcome to another day in the life of the Internet constantly trying to tell women they’re not good enough. Star Wars star Daisy Ridley is responding to a meme making its way around the Internet that says by casting Ridley — a slim woman — the film is helping to set unrealistic expectations for girls. Instead of ignoring it, she pulled a quick Kim K, retaliating by saying that she will not be made to feel ashamed for how she looks. Daisy initially re-posted the meme, screencapped from a user on Instagram, but had to quickly delete it as the username was still in the photo and received a lot of hateful messages. Oops. Clearing up the mishap by posting a new, longer reply encouraging people to look beyond the surface. “What’s happening inside is much more important anyway.” (Photo via @daisyridley)

5. Lena Dunham got the “good girl” seal of approval from her gynecologist and is recovering from surgery. “I have achieved all I ever dreamed of,” Lena joked about her doctor’s encouraging words in a Tweet letting her fans know that she’s home and recovering after surgery for a ruptured cyst caused by her endometriosis. “Your well wishes mean the world,” she wrote on Instagram with the above adorable photo. “I can’t wait to be up and active, and to show my thanks. Always your girl, Lena.” Get well soon, Girl! (Photo via @lenadunham)

6. Quote of the day: “I’m going to live my life to the fullest, and I’m going to do everything on my bucket list.” — Angela “Big Ang” Raiola, who lost her battle with cancer last month. The show’s emotional season finale was a tribute to the beloved Ang.