Everything You Need to Know About the New GF Impossible Burger 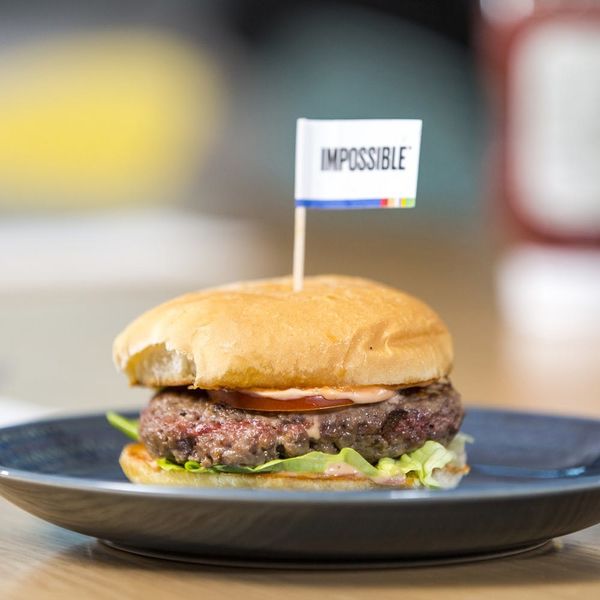 After years of success at more than 5,000 U.S. restaurants, the Impossible Burger is unveiling its first major product change: a juicier, “meatier” recipe that replaces wheat with soy for a burger that can be devoured by carnivores and gluten-free vegans alike. The next-generation, GF Impossible Burger will first be available at select Las Vegas White Castle restaurants on January 8. Eventually, the meatless patties will be sold at White Castles nationwide — and, later in 2019, at grocery stores near you.

The updated Impossible Burger is a simple mixture of water, potato protein, coconut and sunflower oils, and a gluten-free soy protein concentrate that replaces the textured wheat formerly used by the company. Like the original recipe, the key to the new burger’s juiciness is heme (the molecule naturally found in meat that makes it so, well, meaty) and has no animal hormones or antibiotics. The quarter-pound patties each have 14 grams of fat and 240 calories, but they sizzle and satisfy just like beef patties do — and they have just as much protein and iron. Even third-party taste testers who self-identify as heavy meat eaters have attested to its beefiness, according to a press release.

Most excitingly, the team at Impossible Foods said the next-gen patty is more versatile than ever. Once you’re able to buy the beef substitute in grocery stores, you won’t just be able to shape and grill it into vegan burgers. You’ll also be able to braise, simmer, steam, and pan-sear the mixture for anything from dumplings to casseroles — just like you would with ground beef. The brand hasn’t released an exact date for its grocery-store debut, but we’ll let you know when they do.