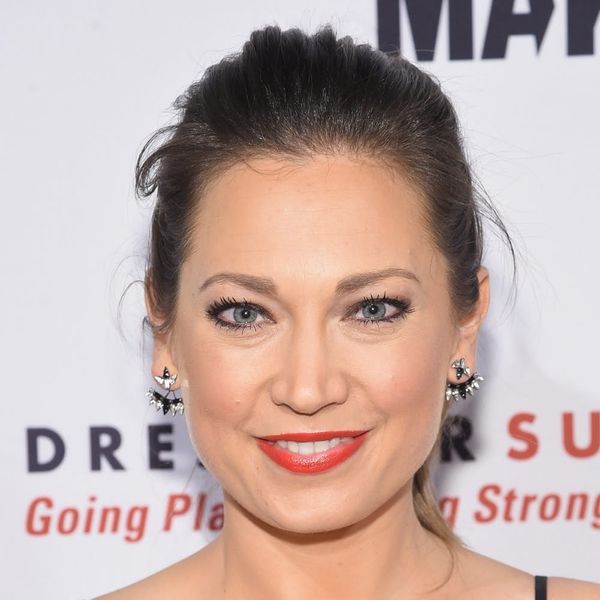 And the forecast says… it’s a boy! Ginger Zee, chief meteorologist for Good Morning America, has just given birth to her second child with husband Ben Aaron.

The weather guru took to social media to make the big announcement, showing off a black and white photo of a little hand (or foot?), writing “8lbs., 7oz. 21.5.” Aaron shared the same shot, below, in color.

Just one day prior, however, Zee was walking the catwalk in a stunning red gown at the Hammerstein Ballroom in Manhattan for Macy’s Go Red for Women Red Dress Collection presentation alongside the likes of Rachel Lindsay, Adrienne Houghton Bailon, and Melissa Joan Hart.

The glowing mama looked stunning for her runway stint in a bump-hugging scarlet gown and overcoat, a chic side chignon, and studded cage heels.

“Excited to be walking in @nyfashionweek for #reddresscollection with @american_heart & @macys!” she wrote on Instagram. “And I get to have a baby in about 14 hours!”

Excited to be walking in @nyfashionweek for #reddresscollection with @american_heart & @macys ! And I get to have a baby in about 14 hours 🤣

The show was in support of American Heart Association’s Go Red for Women campaign, which raises awareness for women’s cardiovascular issues — a cause that’s particularly important to Zee, who lost her grandfather to the disease.

The 37-year old mommy hilariously announced her pregnancy on-air back in August while mid-forecast, saying, “There is a lesser known visual phenomenon that’s about to happen, on our maps only for the next five months. This area here, in the Southwest, right about here,” she said while making a baby bump motion “… [is] going to have a shadow from my belly. Because I’m pregnant.”

She also gave away her baby’s sex at the time of her announcement, saying, “Another baby! Another boy!”

What do you think Ginger should name her baby? Share over @BritandCo.

Nicole Briese
Nicole is the weekend editor for Brit + Co who loves bringing you all the latest buzz. When she's not busy typing away into the wee hours, you can usually find her canoodling with her fur babies, rooting around in a bookstore, or rocking out at a concert of some sort (Guns N' Roses forever!). Check out all her latest musings and past work at nicolebjean.com.
Celebrities
Style News
Celebrities Celebrity Baby Fashion Week New York Fashion Week NYFW
More From Style News