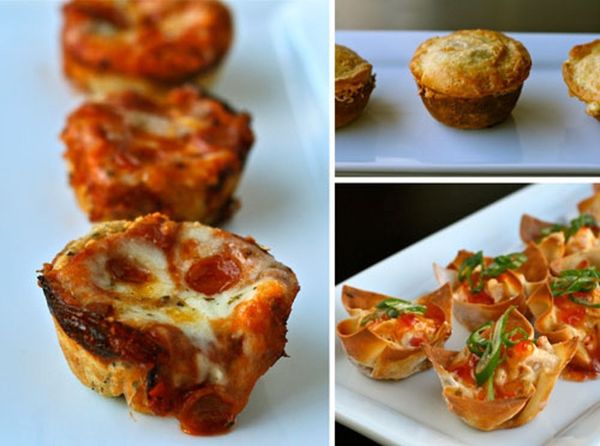 As you get ready for the Big Game this weekend, we present the second installment of mini-sized Super Bowl treats, courtesy of Jaymee Sire over at eisforeat.com!

Crafty Kitchen Pro Tip: Making mini munchies is made infinitely easier with the help of your everyday muffin pan.

1. Mini Deep Dish Pizzas: When you think about game day food, pizza would probably make the Top 5. Why not make individual pies so that all of your guests can have their own? All you need is some pizza dough and your favorite toppings and you can toss up a dozen petite pizza pies in no time.

– pizza toppings of your choice

Preheat oven to 425 degrees and spray cavities of a muffin pan with cooking spray.

Remove pizza dough from packaging and allow it to come to room temperature on a floured surface. Using a rolling pin or your hands, roll out into a thin layer. Using either a round cookie cutter, an egg fry ring, or even an empty can, cut rounds out of the dough.

Using your fingers, stretch the dough without tearing and press into muffin cups.

Next, assemble your pizzas. I like to put a small slice of fresh mozzarella in first to prevent crust from getting soggy. Top with 1-2 tablespoons of pizza sauce, another small slice of mozzarella, and some parmesan cheese. Sprinkle with a little Italian seasoning and add your favorite pizza toppings. (I found these adorable mini pepperonis from Hormel at Safeway. How cute are they?!?)

Bake for 15-20 minutes, or until crust is golden brown and cheese is melty and bubbly.

2. Buffalo Chicken Pot Pies: You can’t have a football party without hot wings. But they can be a pain (and a mess) to make and eat. How about combining all of the flavors you love about hot wings and bake them together in a deliciously spicy individual pot pie? Genius!

Preheat oven according to instructions on biscuit package. Spray cavities of muffin pan with cooking spray.

Using a piece of string, cut each biscuit in half so that you have two thin rounds. Flatten rounds and press into muffin pan.

Evenly divide chicken filling among the muffin cups and top with the remaining 12 biscuit rounds. Try to press the edges together and seal with the bottom portion of dough if possible. Cut two small slits in the top to allow steam to escape.

Brush the tops of each pot pie with egg wash (this will help them turn a nice golden brown). Bake in the oven for about 20 minutes or until dough is cooked through and golden brown.

3. Baked Shrimp Rangoon: If you want to go a little more non-traditional, try this Asian-American appetizer, but lighten it up by baking them in the oven. Rangoon is traditionally fried and made with crab, so I used shrimp to make it a little more cost-effective — plus it goes with the “mini” theme!

First, you’ll need some cooked shrimp. I use frozen raw shrimp from Costco. Defrost them in a bowl of cold water. Pat dry, chop into bite sized pieces and season with kosher salt and chile powder.

Heat olive oil over medium-high heat and saute green onions, chili pepper and garlic until just soft (about a minute). Add the shrimp and cook until pink. (Don’t overcook!) Toss with fresh lime juice and cilantro. Combine cream cheese, Worcestershire sauce and shrimp mixture in a medium bowl. Set aside.

Place a wonton wrapper in each mini muffin cavity. (Part of the wrapper will stick out over the edges). Bake for 7-8 minutes, or until edges are just starting to turn a golden brown.

Remove from oven and spoon shrimp/cream cheese mixture into the cups. Return to the oven and bake another 7-8 minutes. (If you want the edges to brown up, lightly brush with a little olive oil).

While cups are baking, make the sauce. Whisk together pepper jelly, mustard and vinegar. You can either serve as a dipping sauce, or spoon a little into each cup before garnishing. Garnish each cup with sliced green onions.

What are you cooking up for the Super Bowl? Leave us a note below or find us on Twitter.

Jaymee Sire is an Emmy-award winning sports reporter and anchor at Comcast SportsNet Bay Area in San Francisco. During baseball season, she covers the San Francisco Giants for CSN, and often anchors the network’s flagship show, SportsNet Central in the offseason. When she isn’t covering a sporting event, her true passion is food…whether it’s eating out or cooking at home. She writes a blog called E is for Eat, posting alphabet-themed recipes and restaurant reviews several times per week. She also contributes a weekly tailgate blog on csnbayarea.com called Authentic Eats.

Jaymee Sire
Jaymee Sire is an Emmy-award winning television reporter for ESPN. When she isn’t covering a sporting event, her true passion is food. Check out Jaymee’s alphabet-themed food blog, E is for Eat, and be sure to follow her on Twitter & Facebook.
Super Bowl
DIY Recipes
Super Bowl
The Conversation
More From DIY Recipes