These 16 Golden Milk Recipes Are the Tastiest Health Hack Ever 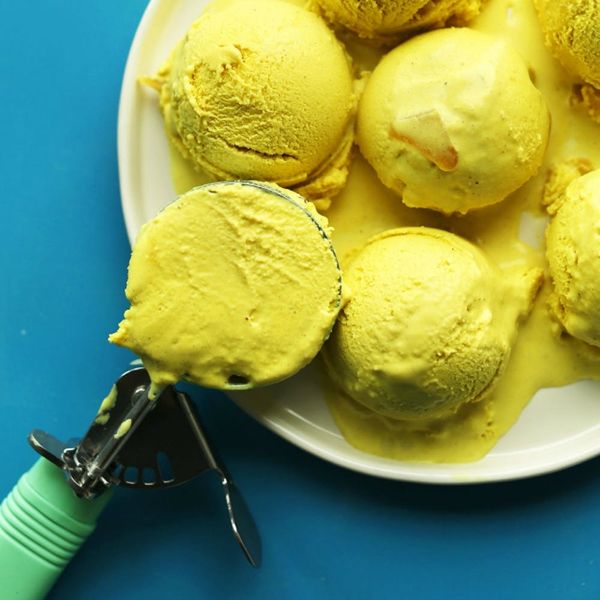 If you haven’t heard, turmeric is having a golden moment. The yellow spice has been dominating our Pinterest and Instagram feeds, and for good reason! This spice has been recognized for thousands of years in Ayurvedic medicine for its ability to reduce inflammation (the root of all disease), heal digestive issues, regulate blood sugar and even shrink belly fat. If you aren’t sure how to incorporate it into your diet, the elixir golden milk comes in a tasty trifecta of turmeric, coconut milk and honey. What’s not to love? While this started as a hot drink trend, we’re seeing golden milk in everything from smoothies to oatmeal to donuts and even ice cream. Here are 16 recipes that prove golden milk is the easiest and tastiest health hack ever.

1. Turmeric Ginger Colada Smoothie: This golden milk smoothie packed with fresh pineapple and banana tastes exactly like a piña colada. Nothing this healthy has ever tasted this good. (via Connoisseurus Veg)

3. Golden Milk Ice Cream Float: This is for the vegans in the house! A creamy indulgent golden milk float is topped with creamy cashew ice cream and a delectable drizzle of tahini-caramel sauce. (via May I Have That Recipe)

4. Golden Milkshake: This extra creamy take on golden milk calls for decadent full-fat ice cream. It makes one tasty treat. No shamers allowed! (via The Kitchn)

6. Vegan Baked Golden Milk Donuts: These healthy baked donuts are topped with coconut cream frosting and a sprinkle of yellow coconut that’s been dyed using turmeric. They’re as festive and fun to look at as they are to eat. (via Diary of an ExSloth)

8. Dark Chocolate Golden Milk Macaroons: Inspired by the wonderful flavors of golden milk, these macaroons call for shredded coconut and coconut oil. They’re blended with turmeric, cinnamon, ginger, cardamom and black pepper, then sweetened with maple syrup. Whatever you do, don’t forget the drizzle of chocolate! (via Minimalist Baker)

9. Golden Milk Overnight Oats: Guess what happens when you let oats sit overnight in golden milk? Delicious healthy things. You won’t even think of skipping breakfast with this treat to greet you in the morning. (via The Kitchn)

10. Golden Turmeric Yogurt Bowl: Inspired by golden milk, this breakfast bowl is a quick and easy way to incorporate turmeric into your everyday eating. Coconut yogurt that’s lightly spiced with a bit of sweet is paired with some delicious seasonal fruits. (via Homespun Capers)

11. Golden Milk Turmeric Smoothie: This four-ingredient smoothie makes a great breakfast on the run. Kefir, mangoes and bananas are blended with golden turmeric powder for a breakfast drink that will have you glowing from the inside out. (via Love & Zest)

13. Turmeric Golden Milk Tea: Move over chai latte! Based on the original drink that started it all, this recipe gives you the option of using cashew, almond or coconut milk and the sweetener of your choice. Tip: Stir in a spoonful of coconut oil if you want some more healthy fat. (via Delightful Mom Food)

14. Turmeric Caffé Latte: What if you combined your two favorite morning drinks, golden milk and coffee? Health hack for the win! (via Camille Styles)

15. Golden Milk Cocoa: This recipe takes things a step further with the addition of cocoa powder. Bonus: A dash of ashwagandha powder will lower stress hormones, so you can relax and say “Om.” (via TheKitchn)

16. Golden Milk Iced Coffee: Just in time for summer, this cold coffee drink with turmeric will help you power through your morning without breaking a sweat. Try adding chia seeds to thicken it up the healthy way. (via The First Mess)

Sally Jones
Sally Jones is a writer and editor living in New York City. She has worked at many websites including iVillage, Ladies Home Journal, More, Parenting, Cosmopolitan, The Knot and YourTango, in jobs ranging from editor to COO. Renovation and interior design are her unhealthy obsessions hobbies. She has renovated every home she's lived in, including the rentals, and like... whoa, who does that? You can catch her at her blog Renov8or.
Healthy Recipes
Healthy Eating
Healthy Recipes recipe roundup
The Conversation
Reviews:
More From Healthy Eating