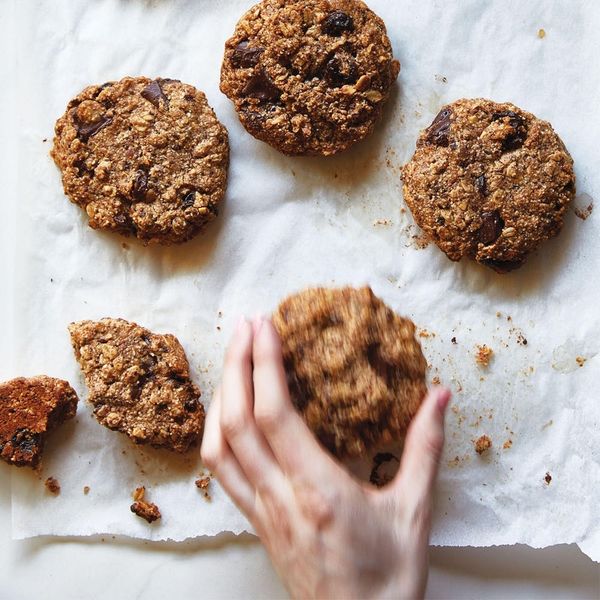 Cookboomarked! is our new series where we review the latest cookbooks from the foodie influencers you follow. Check back often to find out which new releases are worth your hard-earned cash and the recipes you should try first from each.

Sometimes a cookbook comes along that reads more like a novel, where you can’t help but get lost in the heroines’ story. You might pick up Great Tastes ($25) by sisters Danielle and Laura Kosann, for the recipes or the hunger-inducing images by Aubrie Pick. But the gem of this book is snappy repartee that reads like a Wes Anderson movie script between two sisters who are one part Blair Waldorf and one part Jenny Humphrey of Gossip Girl.

GreatTastes is set in New York with jaunts in Los Angeles and abroad and stars the Kosann sisters, who describe themselves as “anti-foodie foodies.” This is to say their obsession with food extends beyond the plate, probing into the fashion industry and celebrity cultures that feed a different kind of hunger. Their online magazine The New Potato begins every celebrity profile with the same question: “What does your ideal food day look like?” The sisters ask themselves and answer that very question in GreatTastes, which is organized around their ideal food day.

Told in essays throughout the book, Great Tastes is all about sisterhood… and their fascinating adventures together. The reader is ushered into the kind of closed door conversations between the sisters and their celebrity encounters. In one story, “the hunk from ‘Game of Thrones’” takes off his shirt during an interview with Danielle, while Laura attends in absentia via rapid-fire text messages. In another instance, they try to remain cool under the pressure of accepting an invitation to an after-hours soiree at George Clooney’s house in Cabo, “with an attempt at the sort of it’s to-be-expected casualness a person might project when asked if they’d like to look at the dessert menu.”

In the book, you’ll find 85 timeless recipes all of which share a minimal ingredient and instruction list with none of them being longer than a page. The inspiration comes from room service sandwiches, pasta at their family’s Little Italy restaurant, and a wedding at Blue Hill Stone Barns. We think an entire book could be dedicated to their Hungarian grandmommy who puts Anthony Bourdain in his place at dinner one night and whose apple strudel recipe will be on your baking short list. The storytelling and recipes in Great Tastes are fresh and fun. Danielle and Laura triumph in sharing exactly what they consider to be in great taste.

This pesto is vegan and contains a lot of nuts, which makes it a substantial side. It’s really nice with a piece of fish. You could also chop the vegetables and toss them, along with the pesto, with pasta for an easy weeknight meal.

Make Ahead: The pesto can be refrigerated in an airtight container for up to 5 days or frozen for up to 2 months.

1. In a food processor, pulse together the cilantro, almonds, and garlic until finely chopped. With the machine running, add the vinegar and 3/4 cup olive oil until coarsely pureed. Season with salt.

2. Preheat a grill or grill pan to medium-high heat. Brush the eggplant and zucchini with olive oil and season with salt and pepper. Grill until marks appear and the vegetables are tender, turning once, about 4 minutes per side. Arrange the vegetables on a platter and dollop with some of the pesto, passing more at the table.

After many (many) late nights ordering Karlie’s Kookies (now called Klossies) from Christina Tosi’s Momofuku Milk Bar, we decided that the time had come to attempt our own version (if only to save on the high delivery fees). Nothing can replace those cookies, but these are super-delicious and have healthier ingredients, so they also make a great snack. The egg makes them nicely chewy, but if you prefer a vegan version, it’s okay to leave it out.

1. Position two racks in the upper and lower thirds of the oven and preheat the oven to 350°F. Line two baking sheets with parchment paper.

3. Add the oats, baking powder, salt, chocolate chips, and dried cherries to the bowl and stir to combine.

4. In a small bowl, lightly beat together the oil, syrup, and egg and pour over the dry ingredients. Stir until evenly moistened.

5. For each cookie, pack 1/4 cup of the dough into a measuring cup and transfer to the baking sheets. With wet hands, lightly press down the rounds to about 1/20-inch thick.

Annelies Zijderveld
Annelies Zijderveld is the author of Steeped: Recipes Infused with Tea. Her food writing and photos have been featured in Paste Magazine, The Kitchn, TODAY, Darling Magazine, AllRecipes, and other publications, She whisks together food and poetry on her blog, The Food Poet, and on Instagram at @anneliesz.
Books
Food News
Books Cookbookmarked
The Conversation