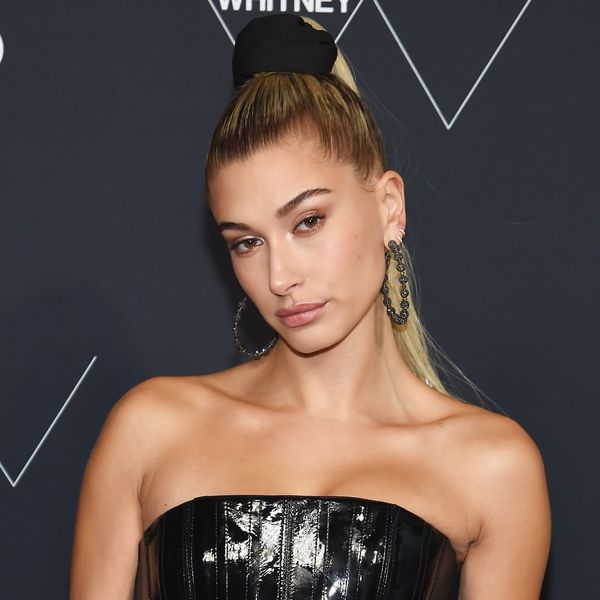 Hailey Baldwin may make plenty of headlines for her reportedly rekindled relationship with Justin Bieber, but girl is writing her own story when it comes to the red carpet. With her penchant for couture and risk-taking ensembles (remember that shower curtain trench coat?), Baldwin’s outfits are anything but boring. Scroll through to see 16 times she killed it on the red carpet.
Golden Goddess: Baldwin poured herself into a slinky Alexandre Vauthier gown with a plunging deep V while attending the 2018 Billboard Music Awards. (Photo via Frazer Harrison/Getty)
Couture in Cannes: The model slayed the Cannes Film Festival red carpet this year in a strapless beaded Roberto Cavalli column gown with rose accents. (Photo via Antony Jones/Getty)
Bow-tiful: Baldwin traded in her floor-grazing couture for a strapless black mini with an oversized sequin bow and towering black pumps while attending a Dior dinner in Cannes. (Photo via Pascal le Segretain/Getty)
Roaring ‘20s Chic: Baldwin was a vision in red at the 2018 Tribeca Film Festival premiere of her film, The American Meme, in this Spring/Summer 2018 Zuhair Murad couture gown with a fringed hem. (Photo via Mike Coppola/Getty)
Peekaboo Cutouts: Baldwin flashed a sliver of stomach in a bright pink cutout frock from Jason Wu’s Fall 2018 collection at the 34th annual Infinity Awards. (Photo via Craig Baritt/Getty)
Made for Metallics: The music video star shone brightly at the 2018 Vanity Fair Oscars after-party in a metallic rose gold Atelier Versace number. (Photo via John Shearer/Getty)
Fit for a Princess: Baldwin wore a Tommy Hilfiger gown with a high thigh-slit and off-the-shoulder neckline to the 2018 Met Gala. (Photo via Jamie McCarthy/Getty)
Signature Style: If her red carpet track record is any indicator, Baldwin’s never met a naked bodysuit she didn’t like: She donned this fringe beaded Zuhair Murad piece in a striking nude hue with Jimmy Choo platform sandals for her hosting duties at this year’s iHeart Radio Awards. (Photo via Alberto E. Rodriguez/Getty)
Runway-Ready: Forget off the rack: Baldwin was off-the-runway while sitting pretty in the front row of Tom Ford’s Fall 2018 show in a pair of blush-hued shorts, hot pink pumps, and a boxy blazer with overstated sleeves. (Photo via Dia Dipasupil/Getty)
Sheer Power: We couldn’t take our eyes off the black sheer ruffled DSquared design that Baldwin wore to this year’s Golden Globes after-party. (Photo via Frazer Harrison/Getty)
Jazzy Jumpsuit: Stephen Baldwin’s daughter also donned a belted silver-and-sheer jumpsuit from Zuhair Murad to the MTV VMAs last year. (Photo via Philip Faraone/Getty)
White Windowpane: Baldwin held her own on the style front alongside all the most swoon-worthy red carpet looks at the Cannes Film Festival in 2017 with a printed white Ralph & Russo garment and some very extra earrings. (Photo via Pascal le Segretan/Getty)
Tiered Tutu: Of all of Baldwin’s stylish getups, this tiered Carolina Herrera ombré tutu ballgown, which she wore to the 2017 Met Gala, is by far, the sweetest. (Photo via Dimitrios Kambouris/Getty)
Lovely in Lace: Baldwin’s black lace Georges Chakras jumpsuit, Giuseppe Zanotti heels, and tousled bob turned more than a few heads on the 2016 MTV VMAs red carpet. (Photo via Jamie McCarthy/Getty)
Cute and Casual: A printed Coach mini paired with shades and beige sandals helped Baldwin proved she was no one-trick style pony at the brand’s NYC High Line soiree. (Photo via Neilson Barnard/Getty)
Stripe Alert: The model looked criminally good in black-and-silver sequin stripes from Tommy Hilfiger at the 2016 Met Gala. (Photo via Dimitrios Kambouris/Getty)