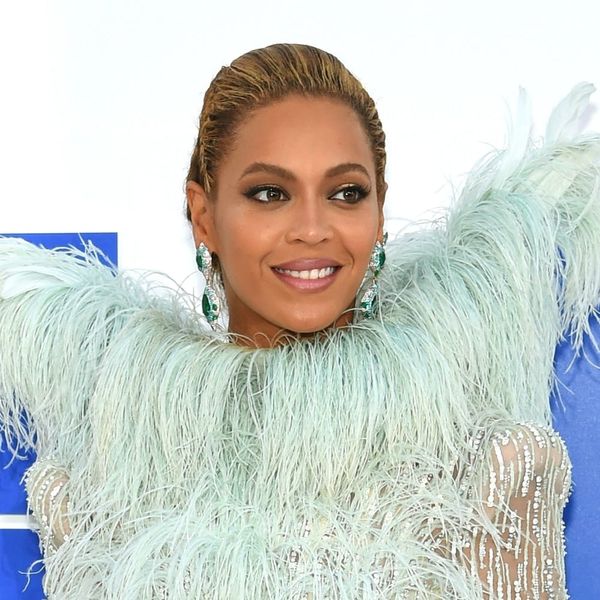 Okay, guys: It’s finally here — the event we’ve been gearing up for all week! The VMAs have arrived in all of their insane, unpredictable glory — RiRi will be opening the show and Kanye West will reign for four free minutes, after all — and if the red carpet thus far is any indicator, we’re in for a wild ride of a night. Don’t believe us? Just take a peek at some of the seriously INSANE outfits we’ve spotted so far: This year’s gonna’ be a doozy!

1. Ru Paul’s Drag Race All Stars: Ru Paul’s all-stars paid homage to the most iconic VMA looks of all time. From Britney Spears’ 2001 VMA snake charmer outfit to Lady Gaga’s meat dress, the gang’s all here, and we couldn’t love it more. Consider us impressed! (Photo via Jamie McCarthy/Getty)

2. Nev Schulman and Laura Perlongo: Catfish host Nev Schulman’s girlfriend, Laura Perlongo, let it all hang out on the red carpet, showing off the couple’s growing bundle of joy in little more than a strategically placed jacket and a body chain. Let’s hope she’s got some good double-sided tape! (Photo via Jamie McCarthy/Getty)

3. Beyoncé: All hail Queen Bey, indeed: We don’t even know WHAT to say about this icy blue feathered-sheer-metallic number, except, dayum, B! This one’s going to be hard to top. (Photo via Jamie McCarthy/Getty)

4. Stella Maxwell: Looking like an Austin Powers extra, Stella Maxwell brought the flower power to the red carpet with her two-piece bra crop top and mirrored flare pants, and all we can say is, groovy, baby. (Photo via Jamie McCarthy/Getty)

5. Farrah Abraham: Okay, did we not get the costume-party memo, orrrr? Farrah Abraham showed up as a literal Wonder Woman knock-off, and we can’t but wonder what on Earth we’re missing here: like why?

7. Nicole Polizzi: Okay, now we KNOW we’re in an alternate universe when Snooki looks the classiest of all! She’s a beautiful mermaid in this blush sequin gown, and our minds are literally blown. WTF IS GOING ON?

8. Jenni Farley: Snooki’s BFF JWoww was no slouch this year either — talk about Gothic goddess! We almost didn’t recognize her in this romantic black gown with thigh-high slits and mesh cutouts — and check out those raven locks!

9. Nicki Minaj: Nicki has been steadily classing up her act for a while now, but despite its mesh side panels and cutout insanity, this is almost, dare we say, demure compared to years past!

10. Halsey: Though these are very likely extensions, given the fact that Halsey was sporting something near a pixie at this year’s MTV Movie Awards, we’re seriously digging this look on her. In fact, it’s almost enough to detract from her peekaboo bits in this mesh beaded jumpsuit.

11. Justine Sky: Looking like something of a beautiful Technicolor bird, Justine Sky covered up in a multi-colored collared fringe frock, adding even more of a pop to her ensemble with a pair of hot pink pumps.

12. Hailee Steinfeld: Hailee was a kaleidoscope of color in her crochet and grommet mini. Knitted chic?

13. Taylor Hill: Is this the VMAs or prom? The VS angel makes it hard to tell in this sequined one-shouldered number with mesh inserts.

14. Rita Ora: Rita took all the trends we’ve seen on the red carpet thus far, from mesh panels to feathers, and mushed them all together into one seriously insane ensemble.

Which look shocked you the most? Let us know over @BritandCo!

Nicole Briese
Nicole is the weekend editor for Brit + Co who loves bringing you all the latest buzz. When she's not busy typing away into the wee hours, you can usually find her canoodling with her fur babies, rooting around in a bookstore, or rocking out at a concert of some sort (Guns N' Roses forever!). Check out all her latest musings and past work at nicolebjean.com.
Red Carpet
Style News
Red Carpet VMAs
More From Style News