Keep It Fresh With These 13 Healthy Hamburger Helper Hacks 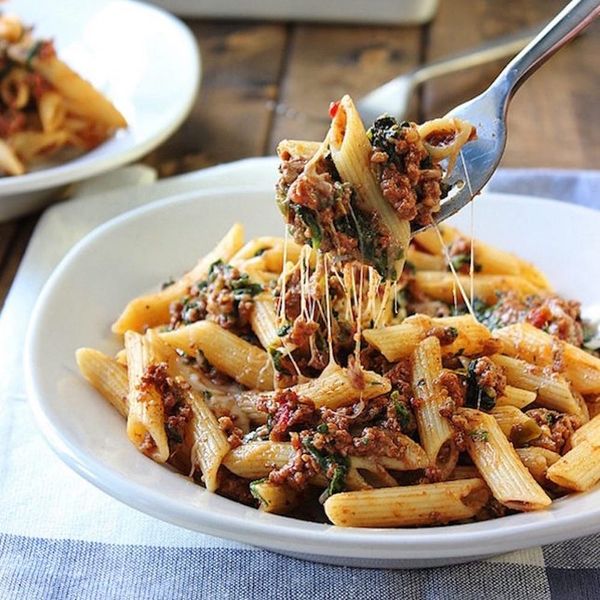 When we’re craving comfort foods, we often reach for items we loved to eat as kids. For some, a HUGE helping of mac and cheese is in order, while for others, healthier alternatives like egg sandwiches are perfect for crushing those comfort food cravings. Hamburger Helper is one meal many of us savored as young’uns that we tend to forget all about now that we’re grown-ups and trying to eat healthier. That’s okay, though, because there are some *genius* hacks out there that can help you recreate the warm, heavy, cheesy taste of Hamburger Helper without the box (or the guilt). Here are 13 of our favorite ideas.

1. One Pot Hamburger Helper Lasagna: Who’d have thought all those elements in your Hamburger Helper packet could easily be recreated with spices and seasonings from our own cupboard? This recipe employs a delicious concoction of flavors alongside lasagna-style noodles for a savory treat. (via Jo Cooks)

2. Unprocessed Hamburger Helper: If you thought cheesy pasta had to come from a box in order to be delicious, well, you were wrong! There’s nothing unappealing about this recipe, which is free of dyes, coloring, maltodextrin, sugar, trans fats and MSG. (via 3 Boys Unprocessed)

3. Easy Homemade Hamburger Helper: This recipe makes a classic HH copycat that’s SUPER easy to make. As a bonus, it’s also incredibly easy to double, making it a fantastic candidate for cooking ahead of time and then re-heating throughout the week when you’re in a time crunch. (via The Recipe Rebel)

4. Lightened-Up Homemade Hamburger Helper: In addition to being homemade, this Hamburger Helper alternative is completely dairy-free. It uses vegan cheese and almond milk to create that gooey, creamy texture and flavor we all love, and it’s made with whole wheat pasta. (via Diethood)

6. Homemade One Pot Cheeseburger Macaroni: Did you ever really conceptualize that HH is basically a cheeseburger in pasta form? MIND. BLOWN. Here’a a homemade alternative that’s lighter on processed ingredients but just as heavy on flavor. (via Spend With Pennies)

7. Vegan Macaroni Skillet: Went vegan and having a hardcore HH craving? We’ve got your back! This totally plant-based skillet uses vegan ground “meat” and nacho “cheeze,” making it perfectly appropriate for vegans. (via Hot for Food)

8. Homemade Hamburger Helper: This gluten- and dairy-free dupe is perfect for anyone who wants a lightened-up version of HH. PRO TIP: After removing from the heat, let the noodles sit in the sauce for about five minutes with the lid closed. They’ll be better able to absorb the flavors of the sauce. (via Whole New Mom)

9. Healthier Slow Cooker Hamburger Helper: If you often find yourself in a rush at dinnertime, this slow-cooker recipe is perfect for you. Simply let the meat sauce cook all day long, and whip up your noodles right before suppertime. Easy peasy. (via Recipe Rebel)

10. Homemade Hamburger Helper: Here’s another Hamburger Helper-inspired noodle dish that pretty much looks and tastes EXACTLY like the original, only — well, better. Bonus healthy girl points for chopping up some zucchini and mixing it in. (via Countryside Cravings)

11. Slow Cooker Beef and Cheese Pasta: Why bother with the box when you can enjoy THIS gourmet-looking pasta dish? Be sure to cook your noodles al dente (slightly firm) so you don’t accidentally overcook them — no one wants mushy pasta. (via The Cooking Jar)

12. Skillet Cheeseburger Helper: Here’s a great option for all of those who are watching their carb intake. Sub black bean or quinoa pasta in for regular noodles to keep this recipe low-carb and/or gluten-free. Not watching carbs? No worries, this will still work with regular pasta. (via Gwen’s Nest)

13. One Skillet Vegan Hamburger Helper: If you want a truly fresh and completely vegan alternative, go for this recipe. In addition to being made of wholesome, plant-based ingredients, it’s also served with a made-from-scratch vegan cheese sauce that’s totally to die for. (via Neurotic Mommy)

Maggie McCracken
Maggie McCracken is a freelance writer, blogger and aspiring digital nomad. She writes primarily about food, travel, yoga and healthy living, and she has a background in health and science journalism. You can read more of her work on her lifestyle and travel blog, The Olive Branch.
Healthy Recipes
Healthy Eating
Healthy Recipes recipe roundup
The Conversation
More From Healthy Eating