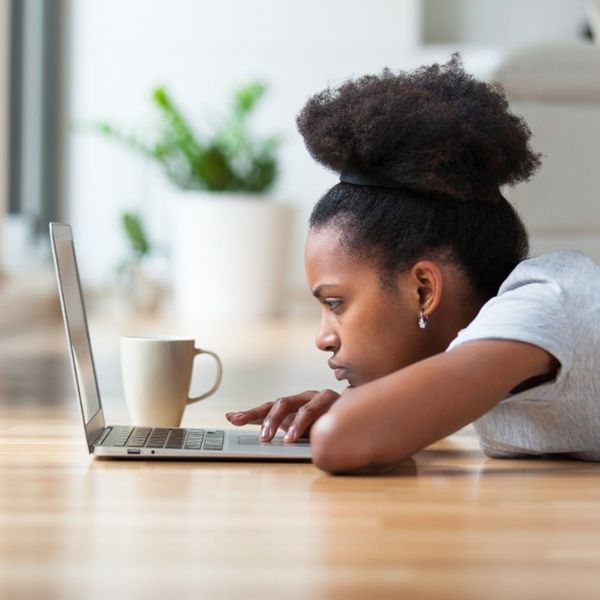 Kids do the darndest things. Think about your own early days: Chances are you had some adorable little hijinks of your own. Of course, your mother didn’t have social media to share it on. We all know what happens when you post something that seems crazy-cute — everybody totally trolls you. When English singer, TV personality, and mom Kerry Katona shared a pic on IG of her daughter’s attempt to cut her own hair, she got some sweet, supportive comments. But she also got plenty of “Always keep scissors away from kids!” snarks. Yep, social media mom-shaming sucks. So we’ve got a few ways to deal with them.

1. Ignore them. Done deal. Forget about those rude comments immediately after reading them. Sure, that’s easier said than done. But it’s completely possible. You post a pic and someone makes an odd, insensitive, or rude comment? Adopt a “who cares” attitude and — like Elsa says — let it go.

2. Kill them with kindness. Instead of freaking out and stringing together a sailor’s list of expletives, keep calm and reply with the kindest words you can muster. Maybe some stranger on FB just called you a “bad mom” when you posted a super-funny picture of your kiddo covered in tempera paints. Fight back the urge to call them a jerk (okay, that was the G-rated version of what you had in mind) and serenely write something such as, “Awww! Thanks for taking the time to comment.”

3. Ask for empathy. Some people just don’t think before commenting. They forget about things such as perspective-taking and empathy. But when their memory is jogged, they sometimes magically remember that what they’re doing is pretty hurtful. At the least, they might not want to risk looking like even more of a jerk in front of others after you ask them to cut you some slack.

4. Remember it’s them, not you. When someone trolls you, it’s their problem, not yours. They’re the one who’s filled with hate, feeling self-conscious, or is just plain negative. You don’t spend your days anonymously sitting behind a keyboard and writing judgy, hateful comments. That’s probably because you have other, better things going on in your life.

5. Show compassion. Along with the “it’s them, not you” idea comes showing compassion. The random person who seems to have so much time on their hands that they can shame you online probably isn’t exactly happy. Instead of hating back, show some compassion for them. Ask yourself, “What could be going on in their life to make them so mean?” Hey, maybe they’re just mean — some people are. But maybe they have been trying to get pregnant and can’t or they’re having serious relationship issues.

6. Just delete. Ignoring isn’t a possibility. After the first time you read that weirdo, meanish, judgy comment, all was lost. You found yourself suddenly scrolling back down your feed every few seconds, reading and rereading the comment. Don’t let someone else drag you down. Delete the comment, making it impossible to look at it anymore. (And don’t forget about options to remove or block someone from access if they’re a repeat offender.)

7. Rock some celeb style. Take a page from some of the famous faces who’ve shut down social media haters in major ways. When Chrissy Teigen couldn’t deal with the constant stream of parenting critiques, she called out the trolls in a very public way — by screenshotting the comments and reporting them herself. Keep in mind, you don’t need to repost like Teigen did. You can find your own celeb-worthy way of getting those commenters to stop what they’re doing.

Erica Loop
Erica Loop is a freelance writer living in Pittsburgh. When she's not busy creating kids' activities for her blog Mini Monets and Mommies, you can find her trying to hang out with her teenage son, being chased by her two Olde Boston Bulldogs or teaching a children's karate class (she's a third degree black belt!).
Mental Health
Parenting
Mental Health social media