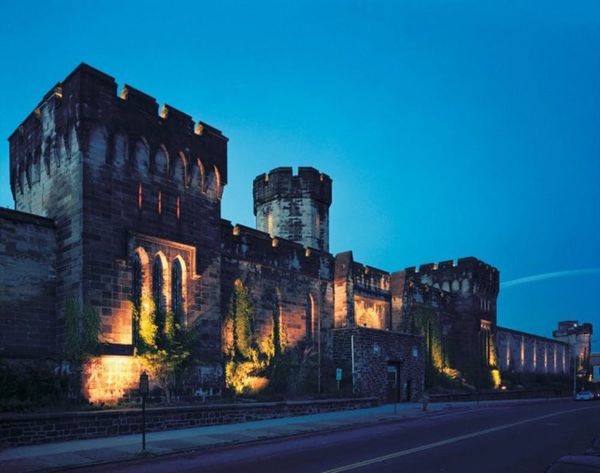 ‘Tis the season… for haunting. Spirit-inhabited houses around the country are officially open for visitation and giving you their best with hours of scream-worthy theater and SFX makeup that will make your skin crawl. Here are the most infamous, terrifying haunted houses, hay rides and mazes around the country for you to visit for some serious frights.

1. Pennhurst Asylum (Spring City, PA): Built in the early 20th century on 120 acres, Pennhurst Asylum is one of the largest institutions of its kind. After much controversy, it closed down in 1987 and was essentially abandoned. Except for the ghosts, of course. School buses drive you to the location to really put you in the spirit of the haunt. They go the extra mile with period pieces and props from the original asylum. Make sure you save your most blood curdling screams for the end when you’re led into a freezing cold basement with 900 feet between you and the guarded exit.

2. Netherworld (Atlanta, GA): This haunted house is known for its storytelling. And its not just a retelling of a cliche horror flick. This intricate tale takes participants on a self-guided journey of terror. The storyline changes, but one thing remains the same: The monsters in here are totally legit. There are hundreds of animated monsters, some of which were even featured in Zombieland. Pro tip: There are scarers in the parking lot ready to make you wet yourself before you even buy your ticket.

3. Headless Horseman (Ulster Park, NY): Every October, this 200-year-old, 45-acre farm turns into a major scare. Just outside Kingston, New York, this one-mile haunted hayride takes you through multiple attractions, guided by your group’s storyteller. Every year the theme changes. Previous years have been “Once Upon a Terror” and “The Black Spider Sideshow.” This year it’s “The Witching Hour.” If hayrides aren’t your thing, there are also haunted houses, which you get to via the corn maze. It’s like all the best parts of a haunted house in one place.

4. House of Shock (New Orleans, LA): New Orleans is a place that thrives on folklore and mystique, so it only seems right that it’s the ideal place to get a scare. This well-known haunted house had humble beginnings in the founders’ backyard. When it got too big for the location, they moved it to a warehouse. From a fire-laden stage to a zombie graveyard and a morgue, there’s a scare for everyone’s taste. 20 years into production, this place is a well-oiled machine filled with tons of attractions that make it so much more than just a haunted house.

5. Ghostly Manor (Sandusky, OH): This is not a Halloween-exclusive event. The Ghostly Manor is up for scaring people year round. It’s one of five haunted houses that are part of Lake Eerie’s Fearfest. In addition to the haunted house, you can hit up a 3D theater, arcade and skating rink.

6. Cutting Edge Haunted House (Fort Worth TX): If your scary movie-watching has taught you anything, it’s that a 100-year-old abandoned meat-packing plant is an ideal setup for a haunted house. In 2009, Cutting Edge won a Guinness World Record for “Largest Walk-Through Haunted House.” It’ll take you an hour to walk through the entire thing. Along the way, you may get brushed with chainsaws. The whole thing ends in a room full of bubbles, which we didn’t know could be scary, but apparently it is.

7. 13th Gate (Baton Rouge): You’ll first be greeted by a giant animatronic wooly mammoth. From there, sets only get more and more detailed. There’s a new theme every year. This year, you’ll find yourself back in Victorian-era London with terrifyingly sinister clowns.This is a show with an amazing team of makeup artists and set designers who are working hard each year to create a new story.

8. Terror Behind the Wall (Philadelphia, PA): This six-part scare fest is housed inside an old penitentiary. An absolutely terrifying haunted house, you can bet they kept the cells in place for more authentic scares. There are 11 acres to cover if you want to experience all six parts. If you want to keep your distance from the actors, just wear a glow necklace so they know not to touch you or involve you in the show.

9. The ScreamZone (Del Mar, CA): Two words: zombie paintball. There aren’t many haunts out there that let you stick it to the actors, but this one does. Basically, you have the power to save the world from the zombie apocalypse. Before that though, you’re a passenger aboard the haunted hayride that goes through a zombie prison and zombie containment. It’s like The Walking Dead, in real life!

10. Thrillvania (Terrell, TX): A four-attraction setup gives people of all scare levels a chance to get their spine tingled. The main attraction is Verdun Manor, which was supposedly home to a married couple — a vampire and a werewolf. They’ve long since passed but still continue to haunt the manor. Mwahahahaha…

What are some of your favorite haunts? Let us know in the comments!

Katelan Cunningham
Katelan is a tech junkie obsessing over all things startup and design. She has entirely way too many apps on her phone and is no stranger to binge-watching. She accidentally fell in love in Los Angeles and that’s where she currently lives, writes, tweets and grams.
Party