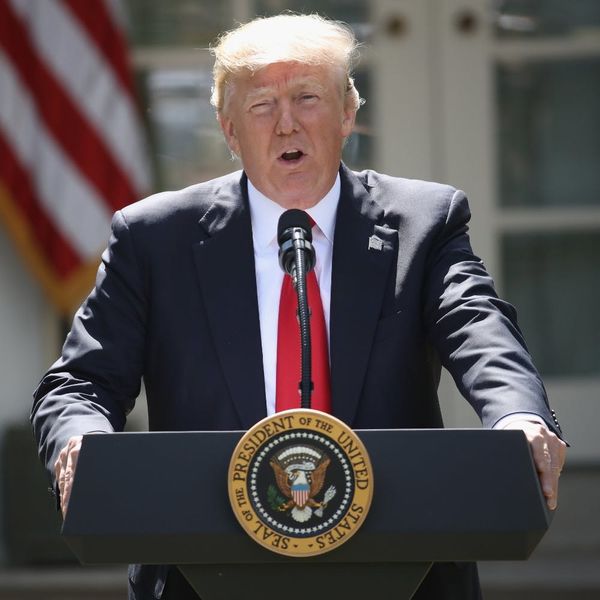 Yesterday’s announcement by President Trump that the US Government would be pulling out of the Paris Climate Accord has people around the world reeling, to say the least. While there’s no question about the effects of climate change on the planet, Trump argues that the accord is bad for American businesses and wants to re-negotiate.

Needless to say, people have *feelings* on the matter, from politicians to celebrities and everyone in between. Check out some of their reaction below.

1. Leonardo DiCaprio: The notoriously eco-friendly actor, who is reportedly headed to Washington to give the President a piece of his mind, pointed out that the entire planet will suffer if we don’t act to reverse climate change.

Shame on you @realDonaldTrump as people lose their lives, homes and economic opportunities to your childish refusal to honor #ParisAgreement

2. Mark Ruffalo: The Incredible Hulk star cast shame on Trump for his decision to pull the plug on the accord, calling his actions a “childish refusal.”

A historic mistake. The world is moving forward together on climate change. Paris withdrawal leaves American workers & families behind.

4. Arnold Schwarzenegger: The Governator remembered “the great leaders” who ensured our future by sticking with the accord in years prior.

What President Trump did today by withdrawing from the Paris Climate Accord is an international disgrace. pic.twitter.com/ZjBMOiABDj

Pelosi on the Paris Accord: "How do you explain this to your grandchildren President Trump?" pic.twitter.com/alIZKpGmv4

6. Nancy Pelosi: The Democratic leader asked how the President would be able to explain his decision to his grandchildren.

We're already feeling impacts of climate change. Exiting #ParisAgreement imperils US security and our ability to own the clean energy future

7. Joe Biden: The former VP pointed out that pulling out of the agreement could “imperil” US security.

Yeah, who cares about climate change? Only every single person with a child. Republicans in congress need to end this childish mayhem.

Rules are such a pesky thing. https://t.co/zakMEVfGw3

9. George Takei: Star Trek actor George Takei also came at the situation with humor, noting that it may not so easy to pull out of the accord.

Please read my statement on the US decision to withdraw from the Paris Agreement: https://t.co/KHm4q80Uc0

10. Justin Trudeau: Canadian Prime Minter Trudeau reaffirmed his commitment to the planet while also expressing dismay at the US’s choice.

Statement on the US' withdrawal from the Paris climate agreements. #parisagreementhttps://t.co/T4XOjWZW0Q

While it remains to be seen exactly what will come of this announcement, it’s definitely heartening to see so many people coming together to continue their commitment to environmentalism.

Have you reaffirmed your commitment to environmentalism? Tell us how you’ll help @BritandCo!