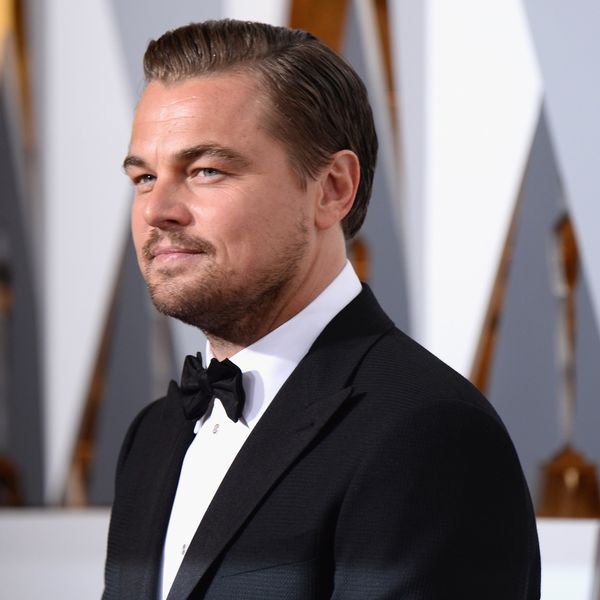 Celebrities often use their influence and high profiles to bring attention to issues including equal pay, diversity in the entertainment industry, and — crucially — preservation of the environment. And with climate change growing more dire by the minute, it's more important than ever for all of us to do our part to help the planet. In honor of Earth Day, here's a look at some of the loudest voices in the fight.

Leonardo DiCaprio: DiCaprio is among the most vocal celebrity eco-activists. In 1998, after filming Titanic, the actor established a nonprofit foundation that promotes environmental awareness and pledged $15 million in 2016 to help decrease the world's dependency on fossil fuels. DiCaprio has also served on the boards of ecological organizations including the World Wildlife Fund, Global Green USA, International Fund for Animal Welfare, and the Natural Resources Defense Council, and he regularly attends events as an advocate for conservation. He even used his acceptance speech at the 2016 Oscars to highlight the issue. "Climate change is real, it is happening right now," he said at the time. "It is the most urgent threat facing our entire species, and we need to work collectively together and stop procrastinating." (Photo via Frazer Harrison/Getty Images)

Olivia Wilde: Wilde is a co-founder of Conscious Commerce, which helps global brands integrate social consciousness into their business models. She also acted as the face for their Conscious Exclusive collection, which features sustainable pieces made from organic silks, cotton, and recycled polyesters. (Photo via Vivien Killilea/Getty Images for Palm Springs International Film Festival)

Kristen Bell: In addition to being the face of Tide's Clean Pledge challenge and a spokesperson for both The Nature Conservancy and Charity: Water, the Good Place actress also does her best to embrace "planet-friendly living." As part of that, she and her husband, actor Dax Shepard, founded Hello Bello, a plant-based baby-care line. (Photo via Matt Winkelmeyer/Getty Images)

Mark Ruffalo: Ruffalo is as environmentally green as his Avengers character, Hulk, is literally green. The star has his own eco "pet project," Water Defense, which mostly focuses on fracking issues. New York Magazine even deemed him "anti-fracking's first famous face" after he conducted his own investigation when he suspected companies were eyeing his family's land in Callicoon, New York. He also co-founded The Solutions Project, which aims to help people transition to 100 percent clean, renewable energy. (Photo via Kevin Winter/Getty Images)

Shailene Woodley: The Big Little Lies actress is so passionate about her eco-activism that she's willing to get arrested for it. In 2016, Woodley was detained during a protest of pipelines in North Dakota. After her release, she took to Instagram to share a rather poetic sentiment about the experience and her hopes for the future: "one day, baby, we'll sing our poetry. the words dripping from our tongues wet with ripened patience. and the lyrics, the sweet fruits born from the seeds our aging hands are now sowing." She included several hashtags in support of the protest, including #NoDAPL, #protectcleanwater, and #iamonyourside. (Photo via Matt Winkelmeyer/Getty Images for HFA)

Emma Watson: Back in 2011, Watson created Pure Threads, a "green" capsule collection in collaboration with Italian designer Alberta Ferretti. Each item was made from raw, sustainable materials, and the profits went to People Tree, an organization that works with manufacturing companies in developing nations to create low-impact garments. She has since supported several other ethical, sustainable fashion initiatives, and even pledged to wear only sustainable designs on the red carpet. (Photo via Mike Coppola/Getty Images)

Natalie Portman: Portman dove into environmental activism early in life. As a child, she was a member of The World Patrol Kids, a group that sang about environmental issues at Earth Day events. And she's kept up her passion for the cause as an adult, too. In September 2017, Portman received the Ongoing Commitment Award at the Environmental Media Association Awards, which honor "the most influential green leaders in entertainment, technology, and business." She also launched a vegan line of designer shoes benefiting The Nature Conservancy, and has urged her alma mater, Harvard, to divest from fossil fuels. (Photo via Dia Dipasupil/Getty Images)

Cate Blanchett: The Ocean's 8 actress is an avid eco-activist in her home country of Australia. As an ambassador for the Australian Conservation Foundation, she helped launch the Who On Earth Cares campaign, which saw her pledge to reduce her carbon footprint. She and her husband, Andrew Upton, also led the Sydney Theatre Company in a major environmental makeover called Greening the Wharf, an initiative to cut waste and emissions. (Photo via Vittorio Zunino Celotto/Getty Images)

Ian Somerhalder: Somerhalder isn't afraid to get his hands dirty when it comes to saving the planet. In 2010, he got involved in cleanup efforts after the Deepwater Horizon drilling disaster, filming PSAs, writing op-eds, and even visiting the site of the spill to aid with wildlife rescue. That same year, he launched the Ian Somerhalder Foundation, which "works to empower, educate and collaborate with people and projects to positively impact the planet and its creatures." (Photo via Christopher Polk/Getty Images for EIF)

Nikki Reed: Like her husband, Reed is passionate about conservation. She even has her sustainable lifestyle brand, Bayou With Love, which sells, among other things, jewelry made from recycled computer motherboards. She's also working on a project to convert air pollution into jewelry. "If the entire world did just one thing differently, we would see change overnight," she told People, "and I think that once your mind is opened up to that, you just can't unknow it." (Photo via Jason Merritt/Getty Images for Variety)

Rosario Dawson: Dawson supports various environmental charities and initiatives, for which she was honored by the Environmental Media Association in 2008. She also acted as an executive producer and narrator for The Need to Grow, a documentary about the importance of healthy soil. "Soil health is a crisis that not enough people know about, even though it affects all other environmental issues," Dawson said in 2017, according to Deadline. "The stories in this film instantly spoke to me. They're an inspiring example of resilience and solutions in a time when so much talk is focused on doom and gloom. Solutions are out there. This film needs to be seen." (Photo via Frazer Harrison/Getty Images)

Rachel McAdams: Three years after starring in The Notebook, McAdams launched Green Is Sexy, a (now-defunct) website that aimed to help readers live a more eco-friendly lifestyle. And she practices what she preaches, by powering her home with renewable energy and using a bike to get around instead of a car. "The environment is a passion for me, and has been for a long time," she told Parade in 2018. "I try to introduce it into every part of my life if I can, always looking for a greener, lighter way to do everything." (Photo via Roy Rochlin/Getty Images for Tribeca Film Festival)

Desiree O
Desirée O is a ‘Professional Bohemian’ who loves anything and everything related to the arts, entertainment, and pop culture. She ADORES being a ‘Newsy’ for Brit + Co, covering all of the latest tidbits of awesomeness that you want to read about. When she’s not writing, she’s either making messy art, going on long adventurous walks with her camera, or poking around over at bohemianizm (http://www.bohemianizm.com/). You can find out about Desirée O and her work at http://DesireeO.com/ or follow her on Twitter @DesireeO.
Celebrities
Celebrity News
Celebrities Celebrity Earth Day Environment
More From Celebrity News