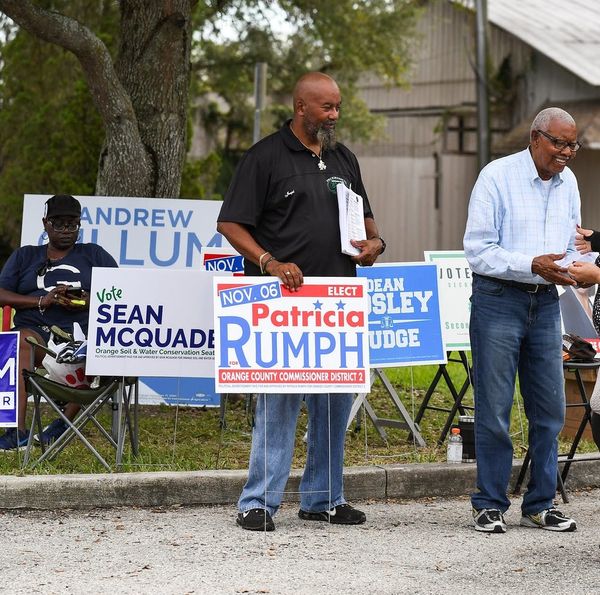 Two days after former President Barack Obama campaigned in Miami in support of Florida gubernatorial candidate Andrew Gillum, two women were shot and killed at a Tallahassee yoga studio. While it’s still unclear what the male shooter’s motives were, the issue of mass shootings is a crucial factor in the immense voter turnout in Florida.

An estimated 38 million Americans went to the polls ahead of Election Day — 5,018,927 in Florida alone — and smashed early voting records for previous midterm elections. Turnout for today’s elections is also expected to surpass previous records — the long lines throughout the country are already proof of that. So why are people so eager to vote in this midterm election, as compared with others? Simply put: There’s more on the line this time around.

Yes, more women, people of color, and veterans are seeking office in this midterm election than ever before, but it’s because of the country’s division that people are passionate to make their voices heard. One of the loudest collective voices in the past several months has come from survivors of the Parkland shooting that occurred on February 14, 2018, at Marjory Stoneman Douglas High School. Almost immediately after the shooting, students vowed to make a difference. They took charge of the mass shooting narrative and declared that voting in the midterm elections would be the only way to stop violence. It is largely because of them that youth voter registration in Florida increased by 41 percent.

“A new generation of political leaders emerged in the aftermath of the Parkland tragedy,” TargetSmart CEO Tom Bonier told the Miami Herald in July. “We witnessed their ability to organize in Florida and across the country as massive crowds took to the streets for the March for Our Lives, and now we’re seeing a quantifiable impact from that organizing. It remains to be seen how many of these younger registrants will cast a ballot in November, but they are poised to have a louder voice than ever in these critical midterm elections.”

I asked @Emma4Change if she felt like Parkland student activism had any impact on the NRA’s decision to not endorse Rick Scott in his run for Senate. Her response? “I don’t know, because I don’t like to think very much about Rick Scott.” #flsen #flpol pic.twitter.com/sh43T1KBUC

In the past two weeks, the US has experienced three critical attacks on citizens: explosive devices were sent by a Donald Trump supporter to key Democrats; an anti-Semitic man who said Trump wasn’t enough of a nationalist killed 11 people at a synagogue in Pittsburgh; and a man opened fire in a yoga studio in Florida. These continuous acts of violence are another reason people across the country are desperately seeking change, and voting is the only way to make that happen.

“Young people are fighting for people who are not middle-ground,” Marjorie Stoneman senior David Hogg told The Washington Post in August. “Democrats do not want a Republican light, and Republicans don’t want a Democrat light to be their governor.”

Early exit polls show that Floridians are leaning toward Gillum. If he wins tonight, he will become Florida’s first Black governor, but that doesn’t seem to be the reason people are voting for him. Gillum is a proponent of strong gun regulation measures including the ban on assault weapons, limiting the size of magazines, banning armor-piercing bullets, and prohibiting the sale of guns to those with domestic violence felonies or misdemeanors. Whether voters are Democrats or Republicans, 61 percent of Americans support gun reform.

“I think that for the first time, possibly, students are making the connection that if they want to see things change, they can’t protest and rally and fight for their causes,” Zaneeta Daver, director of All In Campus Democracy Challenge, told NPR. “They actually need to act. And by acting, I mean participating in elections.”