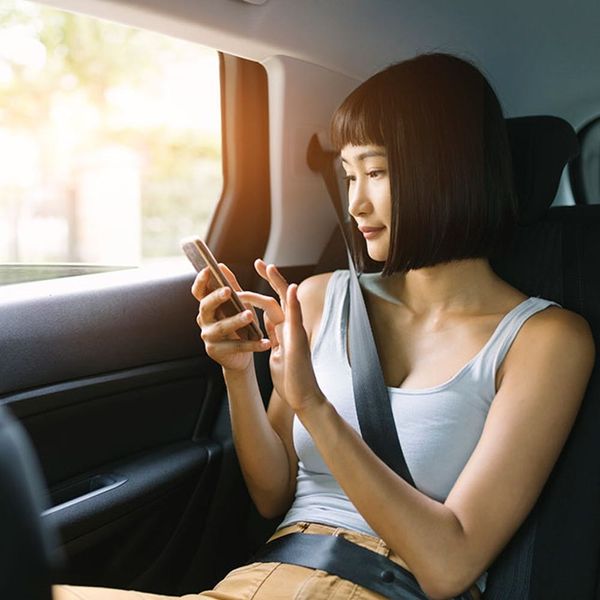 How did we get anywhere before ride sharing? Sure, taxis have been around for ages, but the convenience and affordability of apps like Uber and Lyft make them feel indispensable at this point. And with awesome features like Uber Express POOL and schedule-ahead Lyft service with Siri, the ride-share experience just keeps getting better and better. With that said, there are still unsettling things that can occur in a stranger’s car, and a recently published survey of 400 Uber and Lyft drivers reveals even more weird and interesting facts about the relationship between driver and rider. Conducted by Driving-Test.org, an online learning service, the survey is full of both useful insider info and disturbing driver habits, so of course, we had to share. Read on to learn the one thing that’ll get you a low rating almost every time — and what your Uber drivers are doing with your food delivery orders.

While a passenger vomiting in the backseat is universally abhorred by drivers (97 percent of drivers surveyed said that’ll get you a 1.5 rating, because, obviously) and 78 percent of drivers said slamming their car door will earn you a 2.5, one of the more surprisingly consistent factors in a low rating is not tipping your driver. “Whether a cash tip or given through an app, 85 percent of drivers agreed that not tipping was a factor in passengers’ ratings,” the survey explains, with not tipping resulting in an average passenger rating of 2.6. We say that’s surprising because both Uber and Lyft make the tipping feature seem optional, whereas tipping a taxi driver is much more standard. Either way, it’s time to rethink your exit strategy if you’re looking for more stars, especially since 29 percent of surveyed drivers said they decline passengers due to low ratings.

Get ready y’all, ’cause this one is pretty wild. Nineteen percent of drivers admitted to eating food from a delivery order. That’s right, almost 20 percent of those surveyed said that they’ve occasionally stolen a fry or nipped a piece of naan from your dinner delivery before it reaches your door. So the next time you’re thinking about ordering in a pizza to help with that hangover, you may want to try making our bacon fried rice recipe instead (at least then you’ll know whose fingers have been in the food!).

No one can resist a RiRi or Taylor bop (97 percent of drivers said they were cool with pop), but requesting country music during your ride is a no-no, with 18 percent of drivers saying that genre would annoy them. The safest bet is “decade music,” which only bothered two percent of drivers. Basically, it’s best to know your audience if you’re “brave enough to ask for the aux cord,” as the survey results say.

Thankfully, most of the above transgressions are pretty innocent. However, ride-sharing drivers did report a few disturbing incidents with some regularity. Eighteen percent of women drivers said they’ve been sexually harassed by a passenger, while three percent of male drivers say they have been physically assaulted by a passenger at least once. Whether you’re the driver or the passenger, it’s always smart to keep your wits about you!

Do you always tip your ride-share driver? Tweet us @BritandCo and let us know your thoughts!