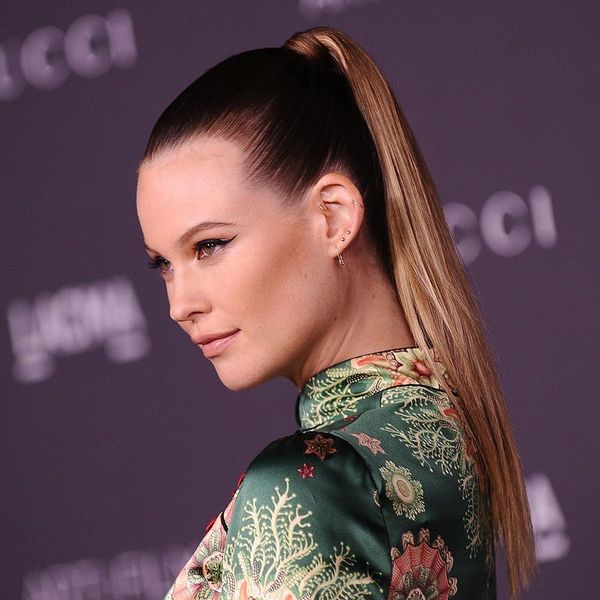 If you’re running from the office to a nighttime soirée (as one does during the holiday season), chances are you won’t have a ton of time to primp. A rushed morning leaves little time for imaginative hairstyles — hence your go-to daytime ponytail. But good news: It’s easy to elevate this ‘do from basic to bomb. Read on for five ways to upgrade a simple ponytail for party time, according to five experts.

1. Mini Accent Braid: Add a micro braid to the center or side of your ponytail to instantly spice up your look. “A slicked-back ponytail on curly hair looks chic and powerful with a mini braid,” recommends Chaz Dean, founder of Wen by Chaz Dean. “Use a smoothing serum to tame frizz and finish the look by hiding the elastic band with a wrapped piece of hair.” (Photo via Jerritt Clark/Getty)

2. Chic and Sleek: If you have fine, straight hair, consider opting for a super sleek, minimalist pony. Even though it’s a classic ‘do, it looks polished and fancy. “This ponytail is perfect for events and even a red carpet,” says celebrity hairstylist Joseph Chase. “Part the hair in the center or the deep side, and pull back as smoothly as possible at the nape of the neck.” A touch of finishing spray will seal in your streamlined style. (Photo via Steve Granitz/Getty)

3. ‘90s Face Framers: Adding in some ’90s-inspired fringe is a trendy, gritty take on a traditional style. “Pull two small sections of hair out of your pony and let them fall on either side of your face, making sure to pull the sections directly from the hairline where your center part would be,” recommends Spoke & Weal founder Jon Reyman. “This look adds a bit of edge to all hair textures.” To finish, add definition to the strands with a pinch of pomade. (Photo via Paul Archuleta/Getty)

4. Polished Pompadour: Embrace the poof, people! The classic pompadour can take on a modern feel if it’s full of texture, according to Garnier celebrity hairstylist Michael Dueñas. “Work with your natural waves and add volume to your hair, making sure it’s not too smooth,” he says. “After you pull your hair up, use fingers or the back of a sectioning brush to pull volume into the front, and complete with a little bit of hairspray.” (Photo via Jun Sato/Getty)

5. High With a Hidden Band: Giovanni Vaccaro, creative director of GLAMSQUAD, says that a high ponytail can feel fancy in a flash without much more primping needed. “If you want a more polished pony, bring it up to the top of your head instead of placing it lower near the neck,” he tells us. “Cap off the look by wrapping a section of hair around the elastic band to conceal it.” Keep things straight and shiny or add curl and texture to the length of your pony, depending on the rest of your getup. (Photo via Jason LaVeris/Getty)