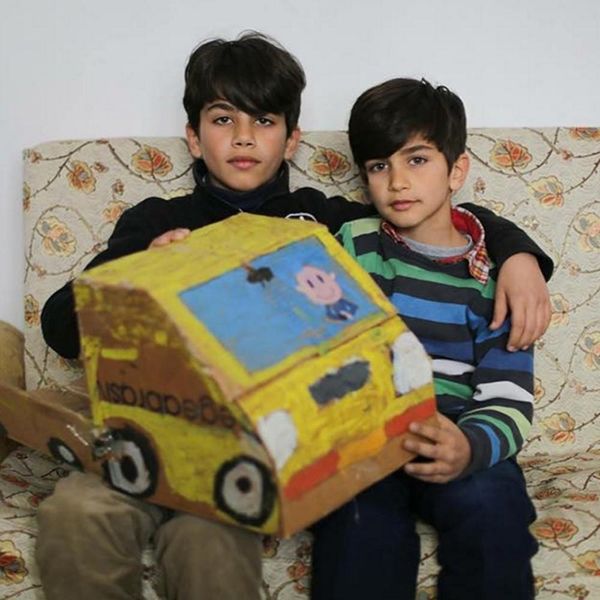 Given civil unrest happening all across the globe and the details surrounding the recent Paris attacks, the refugee crisis has recently become a major topic of discussion in multiple countries, with some people standing firmly on one side or the other. It can be hard to form an opinion amidst all the chaos, but if you want to actually hear from a select few of Syria’s recently relocated refugees, we suggest you turn to Humans of New York’s Instagram or Facebook.

Humans of New York (AKA photographer Brandon Stanton) has a knack for capturing a peek into stangers’ lives with just a photo and a quote. While most of the images he shares are of people around New York City, he’s done a few global trips, which have offered a glimpse into what life is like in far corners of the globe.

Recently HONY had an opportunity to interview 12 Syrian families that have been cleared for resettlement in America. In an introductory Instagram post he writes, “These families have just reached the finish line of a multi-year screening process, and it was quite an emotional experience to meet with them at this juncture. The life of a refugee in America is by no means easy. But for these families, their resettlement has finally brought the possibility of an end to years of intense hardship. I’m very much looking forward to sharing their stories with you over the coming days.” Read a few of their stories below and be sure to follow along for the rest.

“Ever since we had our first child, I stopped watching the TV. Everyday I used to watch the news and obsess over what was happening back in Syria. But once we had children, I had to realize that I couldn’t change anything, and the worrying wasn’t helping my family. We learned recently that we will be moving to a state called Michigan. I’m a pessimist, so I’m not going to believe it until we are on the plane. But my nephew is there and he says it’s like heaven. He says it’s very green and has nice nature. When we get to Michigan, I’m not going to turn on the television again. I’m done with religion and politics forever. I only want to worry about milk and diapers.” (Photo via @humansofny)

“I had to leave the home that I’d spent thirty years building. One day I just had to close the doors, turn the key, and leave everything behind. I’m seventy-two. No one wants to leave home at my age. But I left because I have six sons, and I knew one day the soldiers would come for them. My sons weren’t political. They wanted nothing to do with killing, but that didn’t matter. Good people and bad people were all being treated the same way. I watched soldiers take away the neighbors’ boys with my own eyes. They were good boys. I’d known them their whole lives. But they were led away like sheep. They didn’t even speak up because if they opened their mouths they’d be shot. I knew it was only a matter of time before they came to our house. We left everything behind, but now my family is safe. So I am happy.” (Photo via @humansofny)

“I want to be a professor that examines the bones of dinosaurs because I like dinosaurs a lot. I also want to have a dinosaur but I know that’s impossible. I love to go to Google and type: ‘Nice dinosaur movies.’ But that uses a lot of the phone so I don’t get to do that too much. One day I’m going to open a museum full of dinosaur bones. I’m not sure where I’ll find the bones. Probably America and France. Look at this invention we made. We’ve made a lot of inventions. You can make really good things out of stuff you don’t need. We made an alien out of a speaker that we found in the trash, and then we made a person out of milk cartons, and we turned our trash can into a dinosaur because I love dinosaurs.” (Photo via @humansofny)

Cortney Clift
Cortney is the senior writer and special projects editor at Brit + Co. She typically covers topics related to women's issues, politics, and lifestyle. When she's not buried behind her computer you'll find her exploring New York City or planning her next big adventure.
Photography
Pop Culture
Photography
More From Pop Culture