The Cold Never Bothered Me Anyway: What Husky Sledding in Finland Taught Me 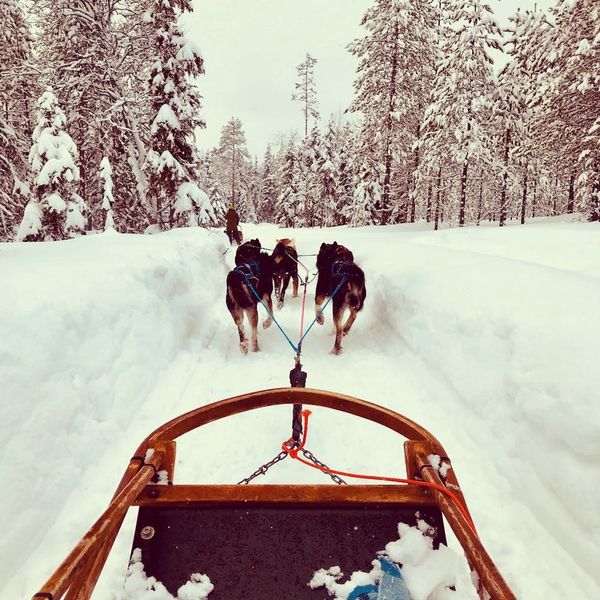 “It’s only negative ten today, so it’s warm for the huskies. You’ll have to help them out a bit.”

I pulled my (faux) fur scarf up above my nose while listening to my Lapland Safari guide, Olli, issue his instructions. I was above the Arctic Circle at Wild Motion Husky Farm in the wintry town of Ylläs in the Finnish Lapland, and the weather of the day was downright balmy for this Nordic part of the world. (Days later, in Rovaniemi, my hostess, Marari Clotet agreed: “When it’s negative five degrees and sunny, it’s like summertime for us.”)

If lions and giraffes are the first things that come to mind when you think of a safari, you’re not alone. But there’s another exotic alternative to the east African plains, and — after an expedition to Kenya earlier this year — I was now up north (far, far north) to experience the freezing, festive allure of the Arctic.

While there are similarities to both safaris — a shared sense of wonder in both locations, to be sure, and undeniably stylish apparel — I felt like I’d ventured to the ends of the earth. And trading my neutral khakis and safari vests for Arctic snowsuits was an even exchange: I challenge anyone to not feel like an Arctic Explorer when in said apparel.

And you do feel like an intrepid explorer. Lapland is, rightfully, known as the last true wilderness in Europe. The entire country is obscenely underrated, which is all the better for travelers looking for a uniquely authentic wilderness experience.

“Somehow, we still haven’t been caught up in the hectic world of today,” my host at the L7 Luxury Lodge, former Olympic cross-country skier Toivo Qvist, told me when I checked in later that day. “We can still enjoy the old way of life here.”

But back to the huskies. Unlike riding horse-drawn carriages in Central Park, or riding elephants in India, these dogs want to run. In fact, the only skill needed to sleigh all day with huskies is to make sure you keep one foot on the brakes when switching between driving with your partner.

Though experts like Ollie command the sleigh solo, I took turns with a friend, one of us standing behind the sleigh, steering, the other in the wooden sleigh itself, cozied up underneath a blanket in ultimate Nordic bliss. The only rule is to make sure your huskies don’t overtake the sleigh in front of you.

Though I can’t imagine such yearning for exercise, I certainly admire it. It was nice to know huskies led decent lives. All the workers at the husky farm knew each dog by name. My personal favorite was the leader of the pack (and selfie aficionado) Helga. The staff is so devoted to the huskies, and their own personal stories were a revelation. Who becomes a husky safari guide above the Arctic Circle?

Someone for whom the cold never bothered them anyway — and who doesn’t mind a little solitude. Olli used to be an undertaker but decided to mix up his professional career because he was tired of spending time with the deceased.

“You need more than dead people in life,” he told me, sagely. Not much more, however: “After six months of this, I do undertaking in the summer, because you need some quiet sometimes.” (The idea of longing for more silence than what is found in Lapland was astonishing to me.)

By the time I arrived at Bearhill Husky in Rovaniemi, the closest I’ll get to the birthplace of Santa, I felt like an old pro and was fully able to relax. There’s something about the vastness of Lapland — the snow, the forests, the fells — that’s so transporting. It makes you aware of the subtle gradation in light and hyper-aware of your surroundings. While it may seem like an eternal winter, there are actually eight seasons in Lapland — and I was visiting in the spring, mind you. It’s so cold that when we landed in Helsinki, the pilot announced joyously that the weather was downright balmy: Plus three.

But this meditative mindset truly does put you in the mindset of Camus: In the midst of winter, I discovered within me an eternal summer. Maybe it’s because of the inability to remove your gloves to document everything on your iPhone every moment, though I advocate risking the frostbite once in a while, the photographs are Insta-gold.

I was able to be fully present in my (admittedly wondrous) present environment. I felt worlds away — not just from home (the streets of New York are a far cry from the husky trails of Finland), but from my routine sense of self. (Read- my anxiety).

It didn’t hurt that I truly felt I was an arctic explorer discovering a new world. Lapland is very undiscovered to Americans. And while Sweden, Norway, and Denmark are more popular at the moment, when it comes to the Arctic, there’s no way of beating Finland’s Nordic luxury. This combination of coziness and stark nature, of elegance and minimalism, really allowed me to live in the moment. I forgot about my deadlines and my to-do list. My anxiety evaporated into the chilly air.

In the words of Elsa, I let it go.

RELATED: Shark Week Memories: What Swimming with Reef Sharks in the Bahamas Taught Me About Confidence

Katherine Parker-Magyar
Katherine is a freelance writer focusing on travel, culture, lifestyle, and politics. Her work has appeared in The Week, Tasting Table, Elite Daily, POPSUGAR, and Electrify, among other publications. She's traveled to all 50 states and 40 countries, but calls New York City home. Follow along on Instagram at @katherineparkermagyar or visit her website at www.katherineparkermagyar.com.
Best Places to Travel
Travel
Best Places to Travel Travel Vacation
More From Travel