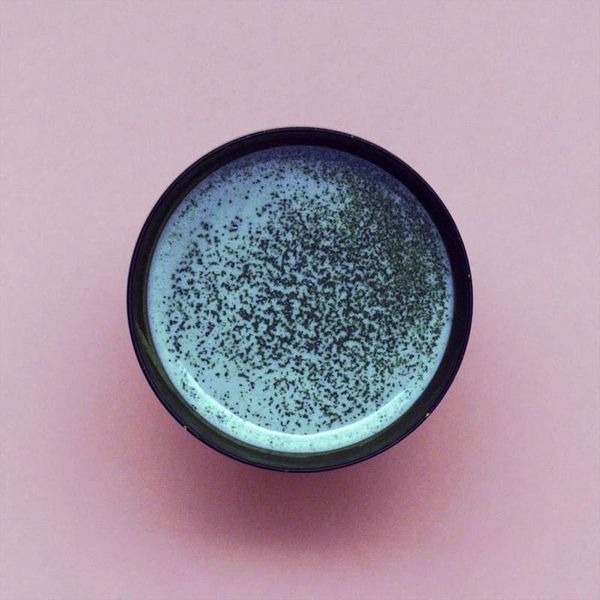 Moon Juice has had a cult following for its line of “dusts” that promise to help you look, think, and sleep better. While I love the concept (more zzz’s? Yes please!), the skeptic in me is wary of any line of products that seems too good to be true. So when a friend tipped me on her latest obsession, Blue Beauty Adaptogenic Protein ($50), I naturally approached it with the same hesitation. It wasn’t until some time later, when I found a freshly made smoothie infused with the protein on my desk (thank you kind coworker!), that I experienced the benefits first hand and fell in love with the so-called “superherb” with “super benefits.”

Off the bat, the product has many attractive claims like reducing stress, increasing energy, and controlling weight gain. With a lineup this appealing, I figured it couldn’t hurt to layer on a one-week trial to my existing food plan. So I decided to drink a serving a day to see if it really lived up the hype. See my experience with it below.

So, What Is It Exactly?

Trust me: I’m not one who has a plethora of protein powders and supplements filling my kitchen cabinet. Heck, I haven’t even jumped on the daily supplement train (sorry, Mom!). So the contents of this blue beauty additive were all news to me.

The high-level explanation is that the powder is composed of a biofermented brown rice protein with adaptogenic herbs. If you’re asking “WTF is an adaptogenic herb,” it’s essentially a trendy substance that works specifically with your physiological makeup to reduce things like stress and fatigue. Moon Juice is very clear on their packaging that both the protein and the herbs found in the Blue Beauty Adaptogenic Protein all contribute to a ketogenic lifestyle — or a high-fat, low-carb, moderate-protein diet.

Moon Juice recommends mixing the element in with smoothies, coffee, water, or even pancakes, in a two-scoops-per-serving allotment. With this wealth of knowledge, I jumped in on a seven-day kick with the wellness product.

I decided to kick off day one by taking the powder with my morning coffee (it was Monday, after all!). I was a little weirded out by the blue coloring left in my a.m. drink but decided to be brave and sip it anyway. Other than the color, the taste was something that immediately caught my attention. It had notes of raspberry but in a more subtle and creamy way. It wasn’t overpowering (which was good), but it wasn’t chalky or tasteless (which is how other protein powders typically roll). After about 30 minutes of enjoying my cup of joe, I noticed that I felt less jittery than I typically do after a strong brew. Thinking this could be a placebo effect, I decided to put that notion to the test the next day.

On day two, I opted to switch my dose to the afternoon using water instead of coffee. That 2pm drag was hitting hard, and I was open to any/all options to get me through the last few deadlines of the day. After mixing my blue concoction, I sipped on it over the course of an hour — and noticed a few things. First, I had more energy, but not in an I-just-downed-an-espresso kind of way. It was more of a focused alertness that felt steady and calculated, which I was all for. Second, I felt less hungry. Usually, around this time, I indulge in two packs of Mott’s fruit snacks (my weakness). After finishing the drink, I felt no need to nosh on something sweet. Wonderful.

Over the course of the week, I tested out different times of the day to indulge in my blue drink. I started to see that it didn’t matter when (or how) I indulged in the beverage. Whether it was directly after a morning workout or before an afternoon energy crash, I felt the same desirable effects. While I got used to the coloring, I will admit I got a few comments from curious coworkers (“What is that?”), but they didn’t bug me in the least. The only thing that never really grew on me was the consistency. Unless I was stirring it frequently, the powder would bunch up at the bottom. Getting a mouthful of it all at once wasn’t pleasant, so I counteracted it by including less of the substance with each intake.

Trying out a protein powder — and taking one daily at that — was a new experience for me. While I can’t compare it to other products or brands, I can say the Moon Juice Blue Beauty Adaptogenic Protein lived up to the listed benefits. Foremost of these was the sustained energy: As a coffee-a-day drinker, the delight of having a jitter-free buzz that didn’t have a crash was a bonus. Plus, the extra focus was v. helpful. In fact, some daring mornings I strayed away from my typical cup of coffee altogether and just enjoyed the blue liquid in pure form (i.e., with a glass of water).

Additionally, the claim of reduced stress and curbed appetite rang somewhat true. Since I didn’t feel anxious from the side of effects of caffeine, I think it’d be fair to say I felt less stressed. However, outside factors (like fewer deadlines and a four day week) could’ve contributed to this as well. Also, I didn’t feel as hungry after consuming the product, but given that the caloric makeup was about 140 per serving, this could’ve helped with the cravings as well.

Still, I loved having the chance to try out a healthy new product that genuinely made me feel better. Coming from the girl who second guesses any too-good-to-be-true claim, I’ll admit that this one won me over. I plan to integrate it in my diet as much as my schedule (and appetite) allows.

Would you try Blue Beauty Adaptogenic Protein? Tweet us @BritandCo!