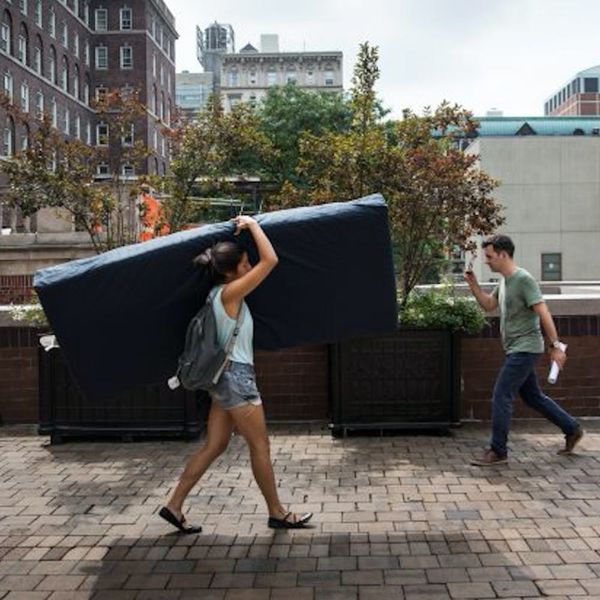 Sexual assault and rape are a huge threat to women on college campuses across the country: one in five college women have been raped. The problem has been thrust into the spotlight too many times in recent years: from the Stanford rape case to sexual assault accusations leveraged by Columbia senior Emma Sulkowicz who carried her mattress around campus for months in defiance of the school’s inaction. Now one school is moving to address rape culture on campus by refusing to admit student-athletes who have a record of sexual violence.

Indiana University’s Faculty Athletics Committee announced Wednesday that prospective student-athletes will be disqualified from athletic scholarships and will not be able to participate in competitive sports at the school. The announcement notes that the Athletic Department will perform criminal background checks on perspective student-athletes, and will disqualify anyone with a record of rape, sexual assault, domestic violence, or other sexual violence listed in the school’s policy.

IU, like many colleges and universities around the nation, has a significant problem with sexual assault on campus. In the school’s first survey on campus sexual assault, the findings for which were released in 2015, it was revealed that 17 percent of undergraduate women who took the survey said they experienced “attempted or completed nonconsensual sexual penetration” while at the school. The survey didn’t indicate whether or not the alleged assailants were part of their schools’ athletic programs, however.

But research on campus rape and sexual assault shows that student-athletes account for about one-third of on-campus sexual assaults, according to WPR reporting from 2014. A separate study published in 2016 found that 54 percent of male student-athletes at a school in the southeast US (which was kept anonymous in the study) admitted to “sexually coercive” actions, such as rape and assault.

Because reporting on sexual assault and rape is estimated to be low, it’s important to note that these statistics are based on the best available information, but could be skewed due to victim’s (understandable) apprehension to come forward.

In the wake of the Stanford rape case, which involved a student-athlete at the school who was charged with sexually assaulting a female student and dominated news headlines for weeks, the new IU policy is a step in the right direction. But given the fact that most of the school’s incoming student-athletes are freshmen who are minors for most of their sports career leading up to college, it’s questionable how useful the new policy will be.

If would-be student-athletes have a record as minors, that record may or may not be expunged depending on the laws where the minor was living when they were convicted, though in most cases, sexually violent crimes are considered felonies, and thus cannot be expunged. However, criminal background checks typically only show convictions, which are a real rarity in rape and sexual assault cases.

According to statistics from the Office of Juvenile Justice and Delinquency Prevention (an office within the Justice Department), 35.6 percent of minors are sexually assaulted by another minor. But the OJJDP also noted that very few of these minors are not convicted the same way adults would be if accused of the same crimes. Given all of this, it doesn’t seem likely that IU or any school would be able to weed out sexual offenders before they enter the athletics program, but they may find some.

There’s the additional issue of Greek life’s contributions to campus rape culture. IU’s survey revealed that 23 percent of those who said they’d experienced sexual assault were at a Greek event when the alleged assaults occurred. This problem is pervasive throughout all universities with fraternities and sororities.

According to Guardian reporting from 2014, fraternity members commit rape 300 percent more than non-fraternity members on college and university campuses. In fact, the so-called Stanford rapist, Brock Turner, committed the rape at the Kappa Alpha fraternity house.

Schools need additional policy reform, but also to educate students (especially men, who commit the vast majority of rapes and sexual assaults) and offer support for victims. Organizations such as End Rape on Campus (EROC) advocates for policy that supports rape victims, and also educates students on how they can be activists on their own campuses. EROC also provides direct support to survivors, helping them take advantage of available resources and file legal complaints, and connecting them with mental health professionals.

The new policy from IU seems to be a statement more than anything else. There will still be student-athletes who have never committed or been accused of sexual violence who will commit rape or sexual assault once they enter the university system. While the Athletic Department is taking a step in the right direction and sending a message about where they stand with incoming student-athletes, screening people is simply not enough to prevent campus sexual assault.

Elizabeth King
Elizabeth King is a politics, history, and culture writer based in the Twin Cities. She is generally pretty cranky but still enjoys traveling, music from the early 2000's, and plotting the resistance. Feel free to say hi on Twitter at @ekingc or check out some of her work at www.elizabethcking.com.
Gender Issues