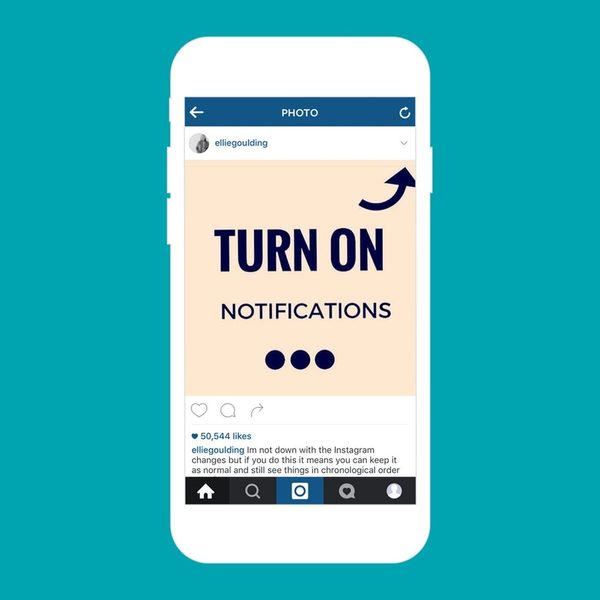 The beauty of technology is that it’s always evolving. Just when you get to that point where you like and understand a new platform, it up and changes on you. A prime example of that exact scenario? All those updates that are about to totally change the way you see your Instagram news feed.

If you’ve been on Instagram for at least five minutes today, we’re guessing you’ve probably seen at least a few posts with an arrow and text that instructs you to turn on post notifications. If you’re super confused by them, allow us to explain. Basically, Instagram is following in the footsteps of their parent company Facebook, in that they’re no longer going to show you posts in chronological order. Instead, they’re going to use an algorithm to bump up the accounts it thinks you’ll like (AKA the ones you like + comment on most).

Instagram hasn’t revealed exactly when this change will roll out, but celebrities are starting their campaigns now. To help alert followers of the upcoming change, celebrities and other accounts with a sizeable number of followers have started posting different versions of the same photo, all of which essentially ask followers to turn on notifications for their account. That means from then on, you’ll get an alert every time they post something. That’s all well and good if you’re a celeb’s number one fan, but what if you just don’t want to miss something?

Ugh Instagram if it's not broke don't fix it! Instagram is changing out of chronological order 😔 so let's say you love someone's photos but don't physically "like" their pics they will bump them to the bottom. It's called INSTAgram for a reason. I don't really understand it and there has to be another motive because you follow people for a reason.. I'm trying to see everyone's pics. That's why you created the unfollow button if u don't want to see their photos. I hate this new update @instagram is slowly trying to introduce & yes it's true they warned us all a few weeks ago.

The solution? Start double tapping on those accounts you care about. The algorithm is said to organize your feed based on the account you engage with most. So if you’re already an avid “liker,” than this change probably won’t make much of a difference for you. However, if you’re more of an observer than a participator on social media, you could easily open up your feed in the near future and find yourself wondering where all your favorite accounts have gone.

We know this is a troubling and uncertain time, but just take a deep breath and we’ll all make it out together.

Cortney Clift
Cortney is the senior writer and special projects editor at Brit + Co. She typically covers topics related to women's issues, politics, and lifestyle. When she's not buried behind her computer you'll find her exploring New York City or planning her next big adventure.
social media
Tech
social media