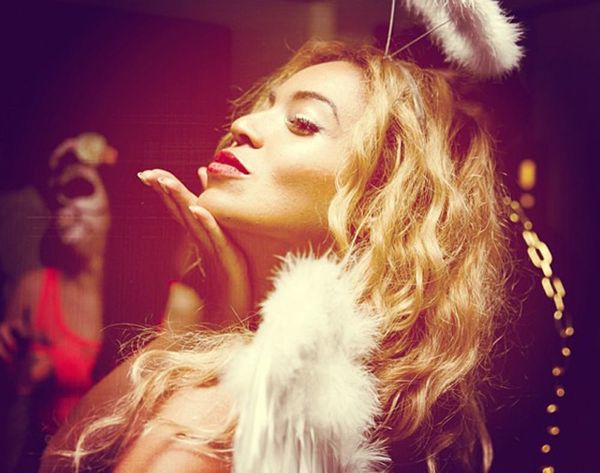 Celebs get to play dress up for a living when they’re wearing fancy gowns to the Emmys or playing a character who’s got killer style (hey, Olivia Pope). So when Halloween comes around, many of them love to pull out all the stops… and document their costumes on Instagram for all of us to like. For a spooky edition of #TBT we’ve found some throwback costumes of some of your favorite celebs to inspire your October 31st getup this year — or to just give you a good laugh.

1. Alice in Wonderland: NPH and his beautiful fam do not skimp on Halloween. Last year’s group costume is one we’re most excited to see this year. Last year the daddies went as Tweedle Dee and Tweedle Dum, letting their little ones steal the show as Alice and the White Rabbit. (via @instagranph)

2. Sofia Vergara: Leave it to Ellen to make the most epic celeb parody costume EVER. Her caricature version of pal Sofia Vergara is so impressive you can barely tell who’s who. JK. JK. JK. (via @theellenshow)

4. Lil’ Kim: While everyone was dressing up like Miley for Halloween, the tongue queen herself went as another risqué music icon. We’re not sure everyone could make this one work, but somehow Miley does it. (via @mileycyrus)

5. Angel: The pop goddess could dress up like anything/anyone she wants and everyone would love it. Instead of going for a funny or scary look, she went angelic and, of course, looked stunning. (via @beyonce)

6. Twins: This is a throwback costume that we don’t see too often. Nicole Richie went with her significantly taller bud as Arnold Schwarzenegger & Danny Devito in Twins. This is a great idea for any couple or duo with extreme height differences. (via @nicolerichie)

7. Sexy R2D2: Glee star Chris Colfer says it all in the caption: “I decided to go as a character whose sex appeal is always ignored.” Not only is it pretty hot, it’s absolutely hilarious. (via @hrhchriscolfer)

8. Sonny and Cher: This pop star pair are a favorite for costume season, but Rachel Zoe and her hubby Roger Berman look nearly unidentifiable! Their attention to detail is stellar. (via @rachelzoe)

9. Miley Cyrus: Last year, just about every look Miley came up with was perfect for a topical, pop culture Halloween costume. Paris decided to go with the most iconic look from last year’s VMAs spectacle. Can you blame her? We even made our own version. (via @parishilton)

10. Bellatrix Lestrange: In her own creepy way, Helena Bonham Carter’s character in Harry Potter has got some stylish looks going on. Chloe nailed it with long locks, face paint and a leather corset. (via @chloegmoretz)

11. Dorothy and the Cowardly Lion: We’re pretty sure that if you’re married to Gisele Bündchen some of her supermodel courage wears off on you. So maybe Tom Brady is the not-so-cowardly lion? (via @giseleofficial)

12. Carmen Sandiego: Here’s another Glee star who took the sexy approach, this time dressing up as the star of one of your fave shows growing up. Naya Rivera is really working that hat as Carmen, and you can do an easy, last-minute version of this costume with our lil tutorial. (via @nayarivera)

13. Queen of Hearts: Victoria’s Secret model, Alessandra Ambrosio went for a super chic version of the villainous queen, and she’s totally #winning. You think we could sport a red bob all the time? (via @alessandraambrosio)

14. Pretty Woman: When your aunt is Julia Roberts, how can you resist channeling Pretty Woman for Halloween? (via @rachel_roy)

15. Bonnie and Clyde: This is certainly the most dapper we’ve ever seen this infamaous criminal duo. Ryan Seacrest and Julianne Hough should get a standing ovation for bringing their pups as lil jail birds! (via @juleshough)

16. Elderly Woman: Heidi Klum makes a living at being drop dead gorgeous, but she didn’t opt for a sexy costume. Instead she got an insanely talented crew of special effects folks to age her 40+ years. The question is, if you didn’t know it was her, would you recognize her? (via @heidiklum)

17. Captain Hook: Forget dresses and tulle. Mindy Kaling made evil Captain Hook himself go magenta with layers of velvet, a mustache and giant feather in her cap. Brilliant. (via @mindykaling)

What’s your favorite halloween costume from the past? Share a your own #TBT Insta with us below!

Katelan Cunningham
Katelan is a tech junkie obsessing over all things startup and design. She has entirely way too many apps on her phone and is no stranger to binge-watching. She accidentally fell in love in Los Angeles and that’s where she currently lives, writes, tweets and grams.
Halloween
Halloween Costumes
Halloween Halloween Costumes Instagram Roundup