27 Voting Selfies That Rock(ed) the Vote 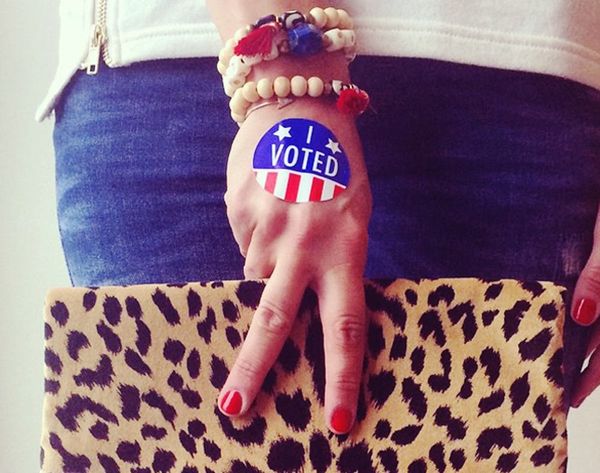 It’s Election Day, folks. Thousands of people across the country are casting their ballots and showing off their “I Voted” swag across all of the social media platforms. And really, what better way to remind people to get out there and vote?! You can’t deny the power of social media, (hello, Ice Bucket Challenge) so in the spirit of double-taps and democracy we think it’s our civic duty to show you the best ways we saw the vote rocked this Election Day.

1. Rep Your State: Show your state pride with your local duds and a sticker. (via @adelanteaustin)

2. Bring the Babe: Election love starts early. You can start teaching them to vote before you even teach them to walk. (via @missheidilynn)

3. Pop Your Collar: If you’re going to do it, do it with a vote sticker. (via @jeremylucido)

4. Bestie Outing: Voting is more fun with friends! And you can always grab happy hour afterwards to celebrate… (via @hartandgrace)

5. Bird’s Eye View: You don’t always have to slap your voter sticker on your shirt. (via @sierra_ruth)

6. Field Trip: It’s worth getting the kids to school a little late if it means showing them that you vote. (via @kristynotkrissy)

7. #OOTD: Double your hashtag impact with a cute outfit for your #OOTD tag and a sticker for your #IVote tag. (via @mrslaneylou)

8. Play Tourist: If you find yourself in a more historic area of your city, take a little detour to find things you’ve never seen before. (via @kyleread)

9. First Timer: Celebrate your induction into the world of voting with a pic that’s totally scrapbook-worthy. (via @nathanrosin)

10. On the Scene: Don’t take a pic inside the polls (that’s illegal), but do snap a selfie where you voted. (via @hey_mireille)

11. Go Patriotic: “Let your vote be your voice!” read the caption on this selfie. Yes. Yes. And yes. (via @southern_belle10)

12. Spread the Word: Once you’re informed on the candidates, voting is a cinch. Look at your city’s voting website to find out where and when. (via @paigehietpas)

13. Family Photo: Get your little future voters out there and show them how democracy works. (via @bethjohnstonsouza)

15. Shut Yo Mouth: Voting does the opposite of silencing you, but this pic is still kind of funny. (via @wwwfrankieroblescom)

16. Accessorize: Show off your arm candy while you rock the vote. It’s not the most important “prop” of the day, but we still dig it. (via @gaia4women)

17. Bilingual: No matter what language you vote in, just make sure you do it! (via @deejayfisch)

18. Go Monochromatic: Nothing like sporting some patriotic colors in the spirit of Election Day. (via @lindsm2011)

19. Puppy Love: Dogs would probably vote for never-ending dog parks and treats every hour, but unfortunately that’s not on the ballot. (via @darklydreamingdewey)

20. Cool Stickers: Does your county have a unique sticker? Show off some local pride. (via @cshepdogg)

21. Patriotic Mani: What better way to rep that stars and stripes mani than with an “I Voted” sticker? (via @rach5351)

22. Ask the Kiddos: Your little ones might have some interesting ideas of how to change the state that they live in. This guy had this to say about Minnesota: “I would give hugs to everyone who gets their feelings hurt. Oh, and I would make sure everyone gets the Lego the ask for, for Christmas!” (via @ruffledsnob)

23. Pound the Pavement: To further celebrate your city, walk or bike to your voting destination. (via @sinmiedo79)

24. Hit the Books: An informed electorate is the best kind. Make sure you do some research on the candidates. (via @designmom)

25. Sport Your Cause: Want more bike lanes? Show your love in your photo. (via @savbikecampaign)

27. Take an OK Cupid Pic While You’re at It: There’s nothing more attractive than a person who votes, right? ( via @sirellingtonbear)

How do you rock the vote? Let us know in the comments!

Katelan Cunningham
Katelan is a tech junkie obsessing over all things startup and design. She has entirely way too many apps on her phone and is no stranger to binge-watching. She accidentally fell in love in Los Angeles and that’s where she currently lives, writes, tweets and grams.
Instagram Roundup
Home News
Instagram Roundup
More From Home News