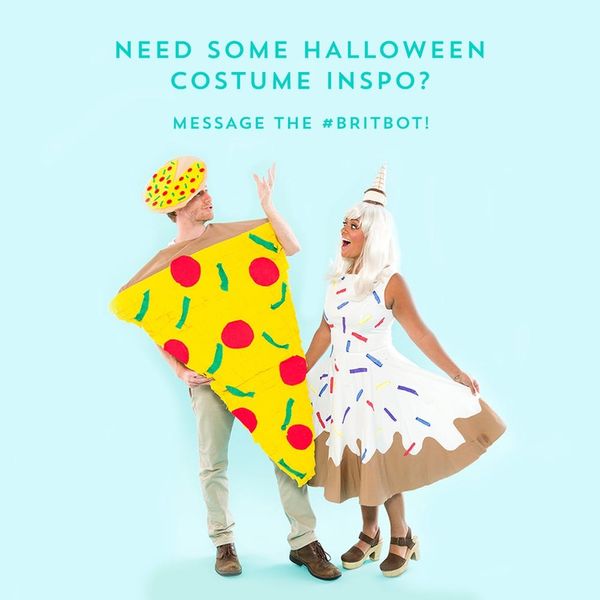 It’s that time of year again. No, not PSL season, silly. Okay, *technically* it is and we totally were counting down the days until we could get our hands on a coveted Venti Pumpkin Spice Latte (too much sugar, you say?!) again here at Brit + Co, but the season I’m talking about is HALLOWEEN.

At B+C HQ, Halloween season lasts for a long time… we plan and execute hundreds of DIY costumes, decorations and recipes to serve up endless spooky and funny inspiration for you to prep for the fall holiday. This year, to help you efficiently prep for all of your Halloween parties, we’re thrilled to announce the launch of the B+C Halloween Bot!

You may be wondering, “What’s a bot?” Glad you asked! Basically it’s a software that executes commands or replies to messages automatically. We’re living in the 21st century, people! Do you feel like Zenon, yet?! Psst… we’ve got an out-of-this-world costume for that, FYI ;)

What makes the B+C Halloween Bot — aka #britbot — different than other bots? This one’s ALL about Halloween costumes! What could be better?!

Picture this: You just picked up your daily PSL, you open up Facebook Messenger to chat with the B+C Halloween Bot about costumes and you get a response that leads you down the path of general costume ideas.

Looking for specific costume ideas like couples or group costumes, ideas as specific as pop singers a la Britney Spears and Katy Perry or, best of all, unicorns? Message that to the bot and it will give you a link to an applicable DIY costume tutorial. Genius AND easy, right?! We’re just trying to look out for our number one — AKA all of you Halloween costumers.

While you could make a Pinterest board with costume ideas, scroll through our B+C Halloween posts *or* go to your local costume store to peruse all the outfits they’ve got to offer, it’s so much easier to just open up Facebook Messenger, request a costume idea from us and have the DIY info come to you. Lazy girl hack, FTW! Oh, and sidenote, you can still do ALL of those things mentioned above; we won’t knock you for it. The more inspo, the better ;)

So, make sure to open up Facebook Messenger RN to chat with the B+C Halloween Bot for all of your Halloween costume inspo needs — it won’t lead you down the wrong path. Unless that’s into a haunted house on Halloween and that’s what you’re aiming for ;) Happy #britbot chatting!

What will you be dressing up as for Halloween this year? Spoil the surprise and give us a peek at your costume(s) by letting us know on Twitter @BritandCo *AND* make sure to tag us using the hashtag #bchalloween on all social channels. Happy Halloween season!