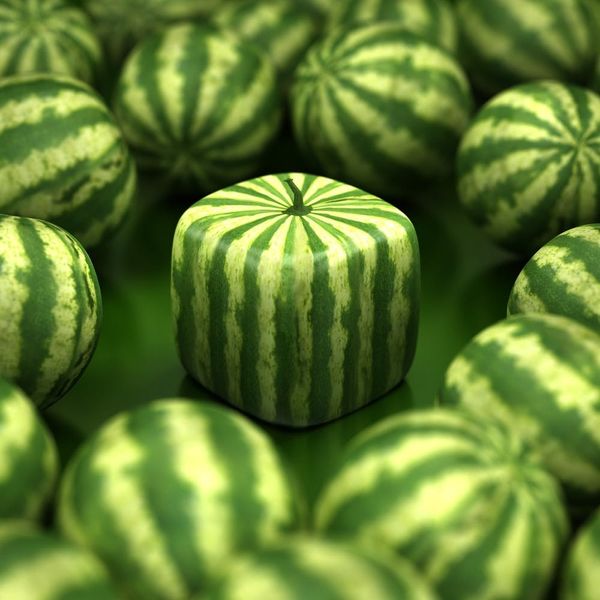 In America, food producers are legally required to identify genetically modified ingredients. Here’s the thing: When that law passed in 2016, the “GMO-free” label became a powerful buzzword. All the best new healthy food products are non-GMO, and they really want you to know it. Who can blame them? When Chipotle went GMO-free, they got a *ton* of points. But the truth is, most of us don’t know as much about genetically engineered foods as we think we do — which is why we might consider eating GMO pink “rose” pineapples while stocking our pantries with non-GMO corn chips.

What Is genetic modification?

GMO stands for “genetically modified organism.” Some people are a little freaked out by the idea of genetic modification (GM), including genetic engineering (GE), because, yes, it refers to actually changing the DNA of the food we eat. But that’s not a new concept.

1. It’s based on something we’ve been doing pretty much forever. “Farmers have been using selective breeding for thousands of years in order to select and amplify desired traits in many fruits and vegetables we enjoy today,” says Dr. Tamika Sims, director of food technology communications at the International Food Information Council Foundation.

2. It’s probably why you love the foods you love. When we selectively breed for bigger, tastier, or more resilient crops — and weed out the smaller, less tasty, or less resilient — that affects the crop’s genetics. Robert Wager, a member of the biology faculty at Vancouver Island University and a volunteer with GMO Answers, points out that over time, these DNA changes became the norm. “Often hundreds to thousands of changes of DNA happen with a single traditional bred crop,” he says.

3. The modern version is way more efficient. These days, if we talk about “genetic modification,” we usually mean foods that have been modified using biotech. “The changes to the DNA are specifically engineered to give the exact desired trait,” Wager explains. “GE breeding is by far the most precise method we have ever used to make new crops and food animals.

4. The process is also a lot more careful. GMOs are highly regulated in a way our ancestors’ experiments never were. “Once the exact DNA changes are stably engineered into the crop/animal an extensive series of tests begin,” says Wager. “On average, this takes 8–10 years and may cost more than $100 million.” That’s a big investment, but it’s necessary to make sure that the resulting crops are at least as safe as their non-GMO counterparts — which happens to be an FDA requirement.

The global food industry has issues: We’re struggling to feed growing populations, we’re running out of water, and a lot of regions need to grow food in less-than-ideal soil. Genetic engineering allows us to adapt to some of the circumstances we may not be able to fix.

1. Genetic engineering can be good for farmers.“GE crops are cultivated to help food grow better,” says Dr. Sims. The benefits vary from crop to crop, but as Dr. Sims explains, these might include protection from pests and disease, the ability to use fewer resources (e.g., saving on water) and enhanced productivity (e.g., growing more food in less space).

Growing GE crops might also be a positive business decision. “GM technology is one more tool that farmers can use to determine how to best use their land with the hope of providing quality crops, a good income for their families and longevity for the farm,” says registered dietician (and GMO Answers expert) Connie Diekman, MEd, RD, LD, FADA. On the flip side, some worry that as independent seed sellers dwindle, farmers may not have as much choice as they’d like.

2. It’s also good for the environment — probably. “GE crops have notably increased crop yields and simultaneously decreased pesticide use,” says Dr. Sims. While different studies make different claims about how much pesticide use has declined — and some claim that it hasn’t — the overall impact on the environment seems positive.

3. It could be *really* good for communities. “GE crops can also be enhanced with nutrients, which can help people with limited access to nutritious foods,” says Dr. Sims. “Inventions such as golden rice, a GMO rice crop (developed to have an enhanced amount pro-vitamin A), and the GMO Cavendish bananas (made to be resistant to Fusarium wilt disease) are helping provide nutritious foods to people who lack access these essential nutrients.” She also points out that increased crop yields support sustained access to fruits and vegetables for more people.

How do GMOs impact your health?

1. Concerning safety, there’s no difference between GMO and non-GMO. “In 2016 the National Academy of Sciences (NAS) released a comprehensive report revealing that GMO crops are as safe to eat as their non-GMO counterparts,” says Dr. Sims. “The NAS committee (of more than 50 scientists) examined acute and chronic animal toxicity data, long-term data on health of livestock fed GMOs and human epidemiological data (more than 900 publications) and found no differences in health risks when comparing GMO foods with non-GMO foods.”

2. Yes, even long-term. “A large misconception about GMOs or genetically modified organisms (foods and ingredients) is that this is some new and unsafe technique that is just now being used in food,” Dr. Sims explains. “However, genetically modified foods have been around for years.” In fact, she says, we’ve been planting GMOs for over two decades. “Crops grown from genetically modified seeds have been in the marketplace, other than potatoes and apples, for many years,” says Diekman. “There are no health problems associated with consumption of those foods.”

3. They’re also just as healthy. “As a registered dietitian, I hope that people will understand that traditionally bred crops, crops grown from genetically modified seeds, and organic crops all provide nutritious food options with no evidence indicating that one of them is better than the others for health,” says Diekman.

So why are people so freaked out by GMOs?

1. Fake news is a culprit. “There is a massive anti-GMO industry that is generating fear towards this technology,” Wager points out. “Once the fear is embedded in the public’s mind it is very difficult to remove with facts.” A lot of anti-GMO food myths come from bloggers and environmental groups with good intentions and not-so-good understanding of the science behind GMOs.

Others just don’t love the big companies developing this technology. “Critics often claim that North American science is somehow under the control of the biotechnology corporations,” says Wager. “But if one looks at European science the same safe conclusions have been published (here and here).”

And then there’s the scary kind of fake news: “Recently Russia has been implicated with anti-GMO fear stories,” says Wager. Yikes.

2. “Non-GMO” is a marketing tool. “The GMO labeling campaign claims to be about a ‘right to know’ but in reality, it is about generating even more fear in the public so that more alternative products are purchased,” says Wager. Think about it: Even pet food brands are excited to let you know they’re GMO-free these days. When you see and hear “non-GMO” framed as a positive — as in, no scary ingredients hiding here! — it subconsciously reinforces negative impressions of GMOs, exactly as labeling law campaigners intended.

3. There’s a fear of the unknown. All of this biotech business is confusing AF if you’re not a science-y person (oh, hey!), and maybe even if you are. An infographic created by the International Food Information Council Foundation shows that while 57 percent of Americans believe GMOs are generally unsafe, 88 percent of scientists feel that they’re generally safe. The same infographic points out that we used to be equally afraid of microwaves. Just sayin’…

Do you have more GMO or non-GMO items on your shopping list? Tell us why @BritandCo!