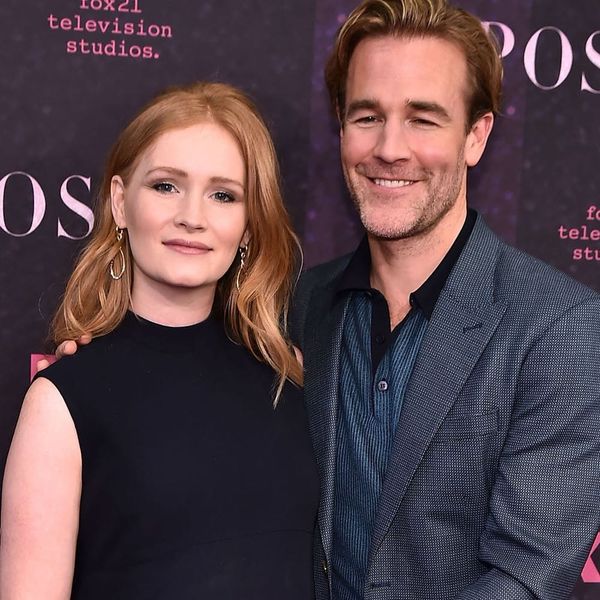 There were plenty of sweet tributes making the rounds on social media this Father’s Day, but James Van Der Beek just may have trumped them all. The Pose star’s wife, Kimberly, made him a dad five times over by giving birth to their fifth child!

The actor confirmed the arrival of his newest daughter, who was reportedly delivered in their home with the help of a doctor and midwife, with a sweet series of photos posted to social media.

“Thrilled to announce we welcomed a brand new baby girl into the world, just in time for #FathersDay,” he wrote on the family’s first snap.

Rather than merely reveling in the glory of parenthood, however, the 41-year-old took the time to address our country’s current immigration controversy, writing the lengthy passage as follows. “These past few days, as I’ve enjoyed the privilege of making smoothies I know my older kids will like, making my wife red raspberry leaf tea to ease her uterine contractions, spending “boy time” with my son and getting my two-year-old down for a nap in the only way I know how… I’ve been heartsick about something. As I write this, kids are being ripped from the arms of their parents. For the kid’s benefit? No — as a purposeful display of cruelty to deter would-be illegal border-crossers AND legal asylum-seekers (It’s happening to both). And it wouldn’t be honest to wax poetic about my new baby bliss without speaking up against this atrocity. “If we allow our government to dehumanize fathers, mothers, and children in the name of defending our borders… We’ve lost a huge part of what makes those borders worth defending.”

Turns out @breteastonellis has a closet full of books by... Bret Easton Ellis. Like most writers I vibe with. Podcast now up on @patreon. We talk @poseonfx, #WhatWouldDiploDo, we argue, we agree, and I defend my constant procreation.. ** Bonus: “Who Wore It Better?” Contest last pic in the carousel - 1980’s Bret, or me playing what could almost be a character out of a 1980’s Bret novel?

He continued on to speak his mind regarding the issue before returning to the matter at hand with a message for his wife, adding, “Oh, and @vanderkimberly – you’re a f*cking earth goddess rock star and I’m as in awe of you as I am in love with you. And our new baby’s name is Gwendolyn. #HappyFathersDay everybody.”

Nicole Briese
Nicole is the weekend editor for Brit + Co who loves bringing you all the latest buzz. When she's not busy typing away into the wee hours, you can usually find her canoodling with her fur babies, rooting around in a bookstore, or rocking out at a concert of some sort (Guns N' Roses forever!). Check out all her latest musings and past work at nicolebjean.com.
Celebrities
Celebrity News
Celebrities Celebrity Baby Fathers Day