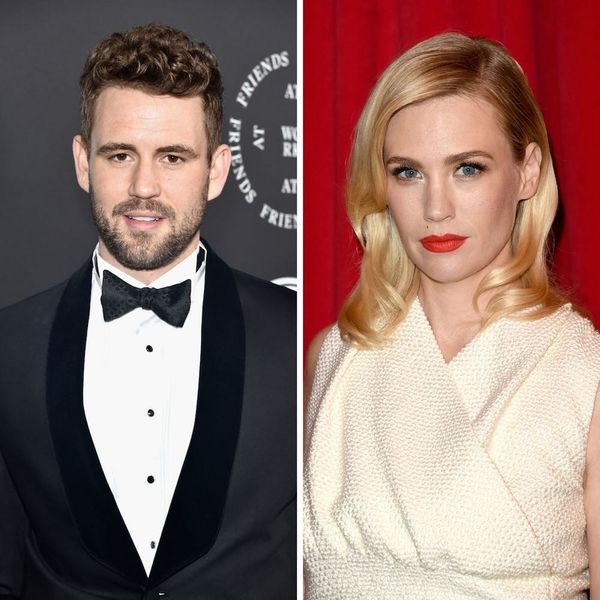 Earlier this year, it was reported that January Jones and Bachelor season 21 star Nick Viall had quietly become an item. While neither commented on the reports at the time, Jones is now attempting to clear the air.

“He’s a friend of mine. He’s super sweet,” Jones told ET when asked about the rumors, before confirming that she’s not attached to anyone at the moment. “No, I’m single. But he’s a friend of mine and tells me lots of inside scoops.”

The Last Man on Earth star has been vocal about her Bachelor obsession, and even revealed on a Late Late Show appearance last year that she thought Viall was “pretty cute.” Appearing on the talk show again in November 2017, Jones shared that the reality star had since reached out to her with an unusual invitation — to join him on an episode of Lip Sync Battle. While she declined, she did admit to her complicated feelings about Viall.

In January, when rumors of a romance started buzzing, it was reported that they’d been dating for about two months. Viall, who split from fiancée Vanessa Grimaldi in August after getting engaged on the Bachelor finale six months prior, hasn’t weighed in on the speculation.

Do you think January Jones and Nick Viall would make a good couple? Let us know @BritandCo!

Nicole Villeneuve
Nicole is an entertainment and lifestyle writer covering pop culture, news, and cool women doing cool things. She likes yard sales, MTV's Teen Mom, and putting too many memes in the group chat. She lives in Toronto.
the bachelor
Celebrity News
the bachelor
More From Celebrity News