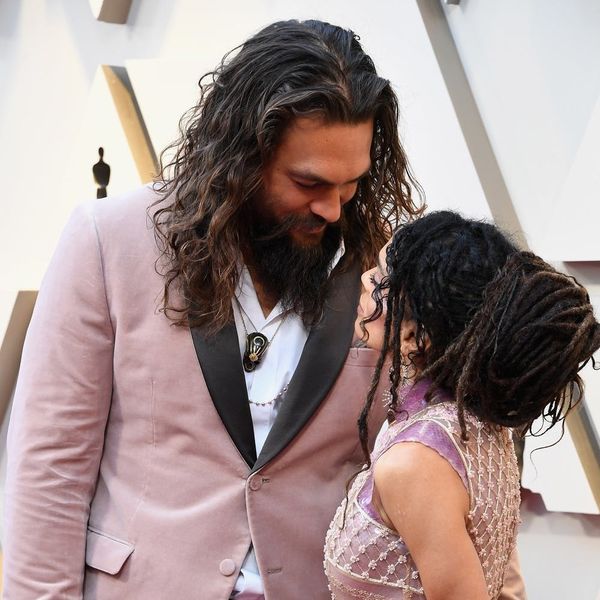 While the 2019 Oscarsred carpet was glittering with stunning gowns and jaw-dropping jewels on February 24, it was a more practical item — or rather who was holding it — that caught our attention. Lisa Bonet, wearing a blush Fendi dress, posed for cameras while her longtime love Jason Momoa, also in Fendi, smiled separately… and held tight to a sleek clutch. Look, all we’re saying is: Get you a spouse who will not only hold your purse while you work the red carpet, but who looks seriously chic doing so.

In the latest installment of “Lisa Bonet and Jason Momoa Look Hot AF,” the latter did his husbandly duties on February 24 by carrying Bonet’s bag with the kind of confidence only a dude who plays Aquaman can have. Momoa stepped off to the side while his stunning wife smiled(ish) for the paparazzi on the red carpet. And while photographers clamored for his photo, Momoa effortlessly posed with her pink-and-purple bag in hand. Oh, and can we talk about the matching Fendi scrunchie on his wrist? It’s perfectly coordinated with his pink velvet tux. (Photo by Neilson Barnard/Getty Images)

The duo wanted to pay homage to Karl Lagerfeld, the late creative director for both Chanel and Fendi, who created Momoa’s look before his passing on February 19. “We have the honor of wearing Karl Lagerfeld, he designed Jason’s tux personally for him, and this is from his last couture collection from Fendi,” Bonet explained during the ABC red carpet pre-show. Bonet topped off her Fendi Couture dress with Fernando Jorge diamond and yellow gold earrings and two Jacquie Aiche opal bracelets. We’re not saying these two should share an accessories closet, but if anyone could pull it off, they can. (Photo via Steve Granitz/WireImage)