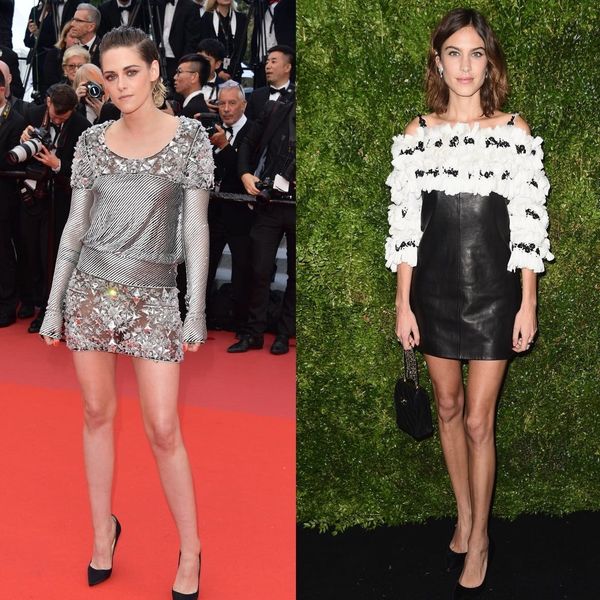 Iconic fashion designer Karl Lagerfeld died at the age of 85 in Paris on February 19, 2019, according to Business of Fashion. The larger-than-life personality was one of the most successful and prolific designers in history with an array of credits to his name that included photographer, illustrator, author, but most notably, creative director of luxury labels Chanel, Fendi, and his own namesake collection. Lagerfeld, born in Hamburg, Germany in 1933, took over the reins at the house of Chanel in 1983 where he infused the then-sleepy brand with influences from pop culture, music, and art that would catapult Chanel from classic to cult-favorite. But it was Lagerfeld's ability to marry haute couture with Hollywood that made the high-end company a household name for young shoppers. With celebs including Keira Knightly, Kristen Stewart, and Diane Kruger as muses, the fashion powerhouse redefined lady-like dressing for a new generation. Keep scrolling for some of the best celebrity red carpet moments from Karl Lagerfeld for the house of Chanel.
Alexa Chung attended the MoMA Film Benefit presented by Chanel on November 15, 2016, in New York City wearing a flirty, feathered, black and white ensemble from the designer's pre-Fall 2016 collection. (Photo via Nicholas Hunt/WireImage)
Julianne Moore showed off the pocket details of her Chanel Haute Couture look for the Maps to the Stars premiere at the 67th Annual Cannes Film Festival on May 19, 2014. (Photo via George Pimentel/WireImage)
Kristen Stewart made a statement at the screening of BlacKkKlansman during the 71st annual Cannes Film Festival at Palais des Festivals on May 14, 2018, in a vintage Chanel look. (Photo via George Pimentel/WireImage)
Who could forget when Jennifer Lopez had her Cinderella moment at the 73rd Academy Awards on March 25, 2001, wearing a silk ballgown skirt and a sheer, off-the-shoulder top designed by Karl Lagerfeld? (Photo via Vinnie Zuffante/Getty Images)
Margot Robbie stunned at the 90th Annual Academy Awards at Hollywood & Highland Center on March 4, 2018, in Hollywood, California wearing a Chanel Haute Couture gown that took Lagerfeld and his team over 600 hours to create. (Photo via Dan MacMedan/WireImage)
Julianne Moore makes another appearance in Lagerfeld's designs at the 88th Annual Academy Awards at Hollywood & Highland Center on February 28, 2016, in Hollywood, California. This time the actress wore a black, full-skirted gown inspired by the house's Spring Haute Couture show. (Photo via Gregg DeGuire/WireImage)
Keira Knightley donned a ruffled masterpiece fit for a fairytale to the European premiere of Disney's The Nutcracker on November 1, 2018, in London, England. The archival gown, which was originally crafted by Lagerfeld for the Spring 2005 Couture show, was covered in gold leaf and hundreds of handmade tulle flowers. (Photo via Joe Maher/WireImage)
Julianne Moore wowed in a winning Chanel by Karl Lagerfeld at the 87th Annual Academy Awards at Hollywood & Highland Center on February 22, 2015, in Los Angeles, California. The star dazzled in over 80,000 individually embroidered, hand painted sequins and flowers. (Photo via Dan MacMedan/WireImage)
Lagerfeld collaborated with Nicole Kidman on her icy blue, fitted number for the 76th Annual Academy Awards at the Kodak Theatre in Hollywood, California in 2004. The sleek design took over 400 hours to make. (Photo via Jeff Kravitz/FilmMagic, Inc)
Zoey Washington
Zoey Washington is the Senior Fashion and Beauty Editor at Brit + Co and a lover of all things pretty.
Celebrity Style
Style News
Celebrity Style Red Carpet
More From Style News