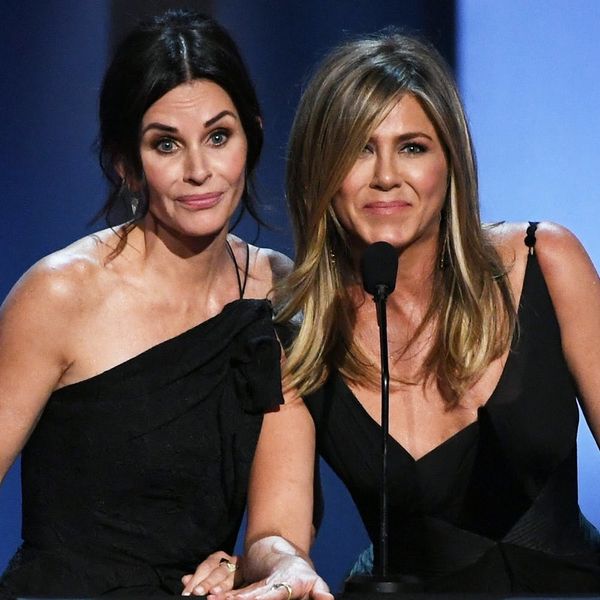 George Clooney’s famous friends gathered on Thursday, June 7, to honor the actor at the American Film Institute’s Life Achievement Award ceremony. And while his wife, Amal Clooney, gave a heartfelt speech in tribute to her husband, most of the other presenters, including Jennifer Aniston and Courteney Cox, decided to take a different approach and have a little fun at his expense.

Aniston began by mentioning E.R., which Clooney starred in from 1994 to 2000, around the height of Friends‘ fame. “The success of [E.R.] can be explained in two words,” she said, according to Entertainment Weekly. When Cox followed with, “George Clooney,” Aniston jokingly yelled, “Lead-in,” referring to the fact that E.R. followed Friends on Thursday nights.

“She’s right,” Cox quipped. “Let’s just admit it right here and now. There were millions of people watching Friends that happened to stay there, too lazy to turn the channel. Without us, you’re Chicago Hope, buddy.”

“Lucky for you, George, we remained on the air on Thursday nights, pretty much paving the way for I’d say every success that you’ve had since then,” Aniston joked.

The duo then launched into a bit based on the Friends theme song. “I mean this, in all seriousness, from the bottom of the both of our hearts, I’m going to be there for you,” Aniston said, before Cox piped in, “When the rain starts to pour.” Aniston then reiterated her previous sentiment, telling Clooney, “I’m going to be there for you, buddy,” which paved the way for Cox’s “Like I’ve been there before.”

Clooney made a guest appearance on Friends in the show’s first season, playing a sitcom version of his E.R. character alongside costar Noah Wyle. In “The One With Two Parts: Part 2,” Rachel sprains her ankle and pretends to be Monica so she can use her friend’s insurance at the hospital. When the women end up on a double date with the two cute doctors (Clooney and Wyle) who treated Rachel, things get messy. It might be worth a rewatch before the AFI Life Achievement Award: A Tribute to George Clooney airs Thursday, June 21, at 10pm ET on TNT.

Were you an E.R. fan? Let us know @BritandCo!