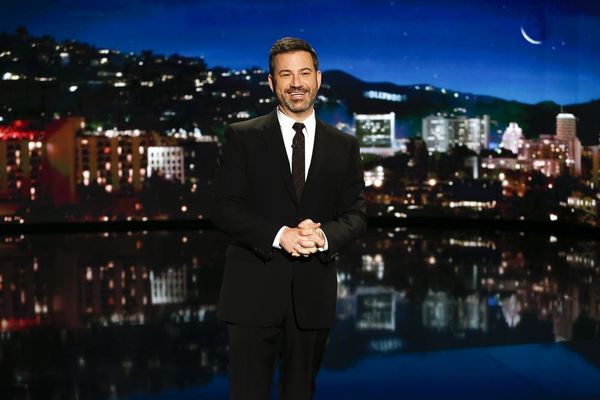 Hallmark released a record 38 new Christmas movies in 2018 — the originally announced 36, plus two bonus films — and while we’re enjoying each and every one of them, Jimmy Kimmel is more than a little overwhelmed.

“How can there be that many?!” the Jimmy Kimmel Live! host asked during the Tuesday, December 18, episode of his late-night show, joking that this year’s output was “more holiday movies than anyone could ever possibly watch.” With that in mind, he took the liberty of condensing the festive films into one mashup.

The trailer for the fake Hallmark movie is nearly a minute long and features clips from Entertaining Christmas, A Shoe Addict’s Christmas, Road to Christmas, and A Majestic Christmas — among many, many others. The story doesn’t make a lot of sense — or any sense at all, really — but it does feature several familiar tropes.

“Hollywood star Johnny Blake thought he had it all,” the trailer begins, before taking a weird left turn. “But this Christmas, shoes are a girl’s best friend.” There are several other detours from there, including a plot about a lawyer who loves ice-sculpting, a young woman in need of a donor (for what, we don’t know), and a story that involves Chad Michael Murray and Jerricka Hinton playing… twins.

“You know how many movies about Hanukkah they made?” Kimmel quipped. “None! Zero! Non-ukkah!” Maybe next year.

What was your favorite 2018 Hallmark Christmas movie? Let us know @BritandCo!