Kate Middleton Debuts a New Dress in Her Color of Summer 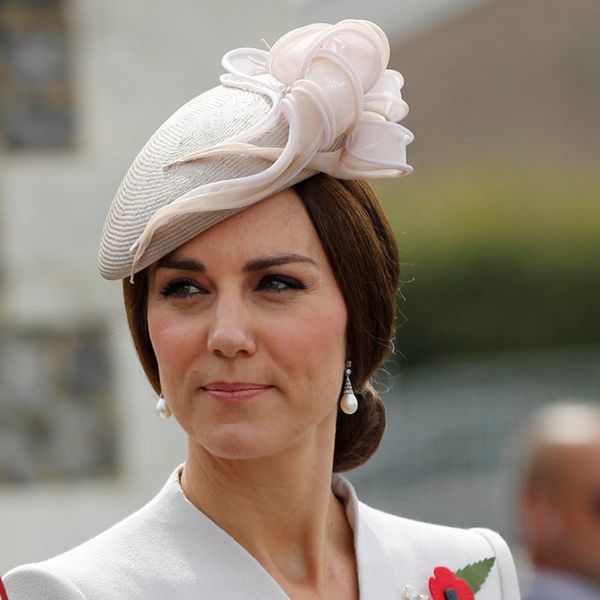 We love when Kate Middleton repeats her looks. After all, her clothes are too chic to only wear once! But it’s definitely exciting when she debuts a new look, like she did in Belgium on Monday, July 31. The royal mom of two continued her summer of the LWD with striking coat dress by one of her go-to designers.

The Duchess of Cambridge looked elegant in a white Catherine Walker “Melrose” coat with silver lace embroidery detailing while attending a ceremony to honor the fallen soldiers of World War I at Tyne Cot Cemetery in Ypres. Middleton kept her accessories to a minimum with beige suede pumps, a small hat with bow detail, a pearl brooch, and dainty pearl drop earrings.

She joined Prince William, Prince Charles, and Prime Minister Theresa May in commemorating the 100-year anniversary of the battle of Passchendaele, which is thought to be the bloodiest battle of WWI. Prince Charles addressed the crowd of 4,000 descendants of casualties of the battle, and Kate Middleton put a wreath of flowers on the grave of the unknown soldier.

Middleton, like Prince William, Prince Charles, and many other attendees at the ceremony, accessorized with poppies, a symbol for the sacrifice soldiers made in WWI.

Yesterday, the Duke and Duchess of Cambridge began the trip with a commemoration for the fallen soldiers at Menin Gate in Ypres. The duchess wore the same white Alexander McQueen skirt suit from Charlotte’s christening.

Do you love the duchess’s latest new look? Tell us what you think of the Catherine Walker style @BritandCo!

Elyse Roth
Elyse Roth is a freelance writer and editor who is a midwestern transplant in NYC. She loves to explore the city, plus you can find her at a Broadway show or the ballet usually once a week. When she's not finding things to do in New York, she's thinking about where she can travel next. She's combined her love for food and TV into a blog where she makes food eaten on her favorite TV shows at tvdinnerblog.com.
Kate Middleton
Celeb Style
Kate Middleton Royal Family Summer Fashion
More From Celeb Style