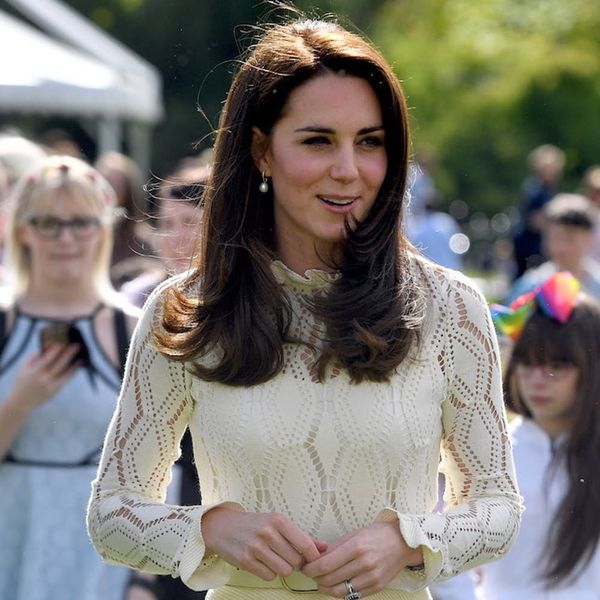 Kate Middleton’s Royal outfit recycling has officially reached peak hauteness! The Duchess of Cambridge hosted a tea party at Buckingham Palace on Saturday while giving off MAJOR fashion girl vibes in a cream lace See by Chloé Dress ($460) that had us swooning over its soft yellow hue, lace bodice, and pleated skirt.

As with many of the 35-year-old’s outfits, it’s not the first time we’ve seen her stun in the jersey dress: We first caught a glimpse of it when she wore it to a children’s tea party in Canada last September. For its second wear, Middleton used her styling skills to change it up, adding an Acne Studios belt to cinch in her waist and Monsoon Wedge Espadrilles ($79) to complete the look. Chic and affordable? Consider us sold!

It’s just another example of the Duchess showing us that you can never be too posh to wear an item of clothing you love (and have been photographed in) on multiple occasions — like when she rocked those Zara moto pants to visit a farm *and* on a trip to India. Plus, who could forget the lilac Roksanda Ilinčić dress she wore like, four separate times? Take it from the Middleton, when something works, it works!

Now, if you’ll excuse us, we’ll just be over here, adding those shoes to our cart before they’re all sold out.

What do you think of Middleton’s look? Yay or nay? Tweet us @BritandCo.