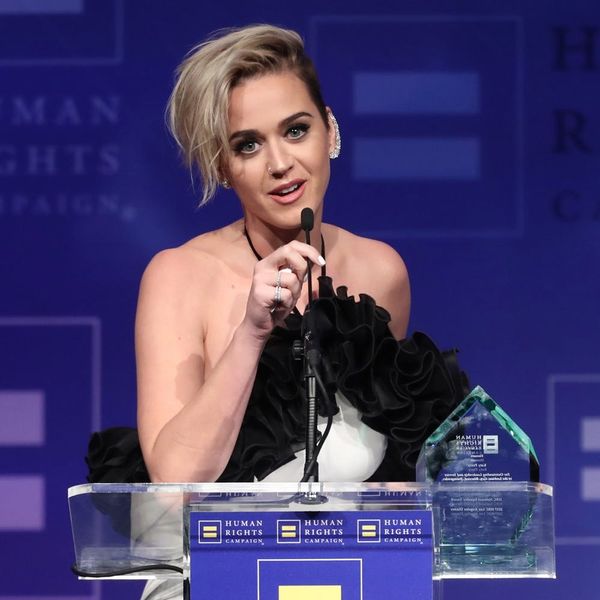 Katy Perry has never been afraid to mix business with politics. She’s was a vocal supporter of Barack Obama’s White House and Hillary Clinton’s presidential campaign, calling on voters to “roar for Hillary” at the Democratic National Convention last year. After Donald Trump won the election, she donated $10,000 to Planned Parenthood and took to the streets for the Women’s March. Now the pop star is honoring Clinton in a very special (and fashionable) way.

Perry announced the launch of a new line of shoes named after the former presidential candidate. The Hillary Pumps, which run at $139 a pair, feature a clear heel filled with star and moon glitter. The design is inspired by Clinton’s message to “reach for the stars,” and guess who’s already a fan?

Perry posted the pic of Clinton wearing the shoes to Instagram, with the caption: “OMG I LOVE HER.”

Clinton isn’t the only powerful lady Perry commemorated with heels. Two other shoes in her collection are nods to women — real or fictional — who’ve broken the mold. The Sia is a shout-out to her fellow music-maker, while the car-shaped Thelma pays homage to Thelma & Louise’s renegade heroine.

We’re loving Perry’s tribute to her lady-heroes, and her new muse seems pretty happy about it too!

What do you think of Katy Perry’s Hillary Clinton heels? Tell us @BritandCo!

Rachel Davies
Rachel Davies is a writer, curator, and editor. Apart from writing, Rachel loves to read, take Greyhound buses, and drag her friends to museums every weekend. You can find Rachel over on Twitter @rachelcomplains.
Politics
Celebrity News
Politics
More From Celebrity News