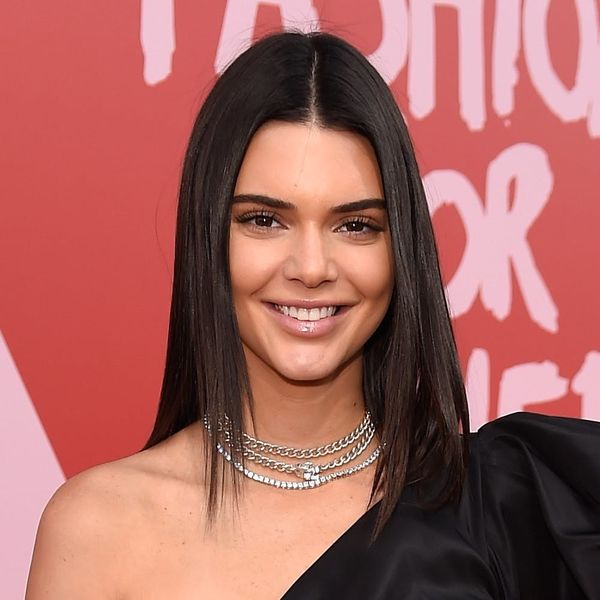 Kendall Jenner may have recently claimed that she’s not likely to share details about her romantic life; however, with so many fans and foes focusing on the career-related backlash she’s been facing (we’re talking about her Vogue India cover as well as the now infamous Pepsi ad, obvs) the young model may have felt like a little distraction was necessary. And what better way to do that than letting us in on the details of her first kiss, which happened in the shower — but not how you’d expect.

Chatting with W Magazine, both Kendall and Kylie Jenner were ready to dish up a few deets, but it’s in the accompanying video where the 21-year-old decided to get *really* personal. Prefacing the tale of her first “real” kiss with, “You’re gonna think this sounds really crazy,” she then quickly adds, “It’s not as crazy as it sounds.” We’ll judge for ourselves, thank you very much.

Admitting that the smooch took place in the shower (oh my!), she reveals, “We were fully clothed and the shower wasn’t on, it wasn’t like that.” Um, okay. She explains, “We were playing truth or dare, me and three of my friends, and my little sister was trying to spy on us.” OMG, we can totally imagine a little mischievous Kylie refusing to give Kendall privacy.

The elder Jenner continued, “My room didn’t have a lock on it, but the bathroom door did, so we all shoved in the bathroom until we got dared to kiss someone; we would have to go in the shower and close the curtain so no one would see and we’d kiss and come out. So, it was in a shower but it’s not as naughty as it sounds.”

No, not necessarily naughty, but totally cute. And we can’t help but wonder who the lucky friend was who got to be the first to kiss Kendall Jenner.

What do you think about Kendall Jenner’s first kiss story? Do you have a cute story when it comes to your first smooch? Let us know @BritandCo!

Desiree O
Desirée O is a ‘Professional Bohemian’ who loves anything and everything related to the arts, entertainment, and pop culture. She ADORES being a ‘Newsy’ for Brit + Co, covering all of the latest tidbits of awesomeness that you want to read about. When she’s not writing, she’s either making messy art, going on long adventurous walks with her camera, or poking around over at bohemianizm (http://www.bohemianizm.com/). You can find out about Desirée O and her work at http://DesireeO.com/ or follow her on Twitter @DesireeO.
Kendall Jenner
Celebrity News
Kendall Jenner