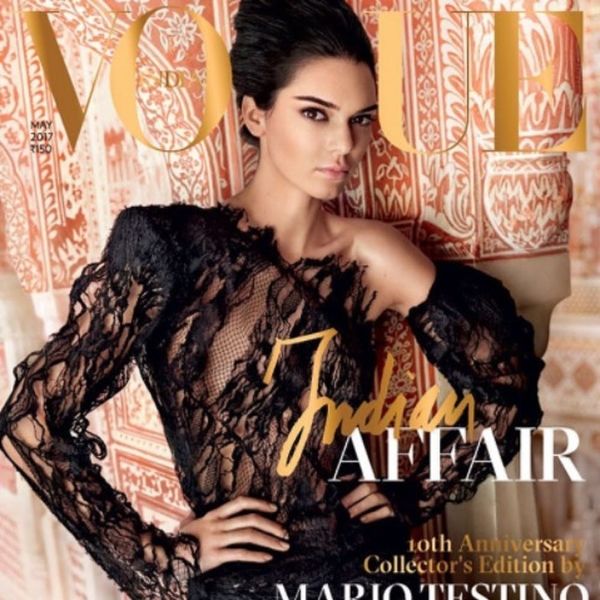 Kendall Jenner just can’t seem to keep herself out of trouble these days. She may have tried to ignore the entire Pepsi ad disaster, even as it took a super scary turn at an IRL protest, but now her appearance on the cover of Vogue India has sparked ANOTHER totally new controversy.

Shot in Jaipur’s Hotel Samode Palace by celebrity fashion photographer Mario Testino, the inside pages show the reality show star and model posing with Bollywood actor Sushant Singh Rajput. But on the cover, it’s all about Kendall Jenner. And people are kinda peeved about it.

While the 21-year-old’s image may not seem like a big deal at first, the fact that this issue kicks off the magazine’s 10th anniversary celebrations has plenty of readers feeling as if an Indian model should have been featured for the special honor.

When the cover was posted on Instagram, fans of the mag made their opinions known with comments like, “Why is not an Indian women chosen for the 10th anniversary of Vogue India? This is was to celebrate the 10th of Vogue India and the model is not even an Indian!” and “So… One of the most populated countr[ies] and couldn’t even feature an Indian model. Good way to go.”

There are more than 11,000 comments at this time, and pretty much all of them express the same disappointment — there’s no doubt that Vogue India’s cover has been deemed a major fail.

What do you think about Kendall Jenner appearing on the cover of Vogue India for their 10th anniversary kickoff issue? Let us know @BritandCo!

Desiree O
Desirée O is a ‘Professional Bohemian’ who loves anything and everything related to the arts, entertainment, and pop culture. She ADORES being a ‘Newsy’ for Brit + Co, covering all of the latest tidbits of awesomeness that you want to read about. When she’s not writing, she’s either making messy art, going on long adventurous walks with her camera, or poking around over at bohemianizm (http://www.bohemianizm.com/). You can find out about Desirée O and her work at http://DesireeO.com/ or follow her on Twitter @DesireeO.
Kardashians
Celebrity News
Kardashians Kendall Jenner