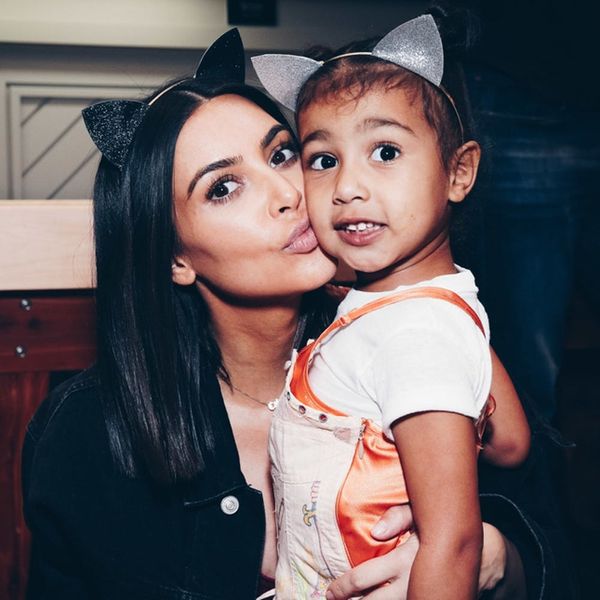 It seems like one member of the Kardashian-Jenner family is always dealing with some sort of controversy. In the wake of the Kendall and Kylie vintage tee debacle, Kim Kardashian West is coming under fire for putting her daughter, North, in a dress that appeared to have a corset. The star took to Twitter on Wednesday to respond to followers who thought the dress was inappropriate and set the record straight.

The garment in question was worn back in April when Kardashian took her oldest daughter backstage at an Ariana Grande concert (hence the kitty ears). Although the Kardashians are basically responsible for making the modern corset, AKA waist trainers, popular again, Kardashian West is firmly denying she is trying to push the style on her four-year-old.

I would never put my daughter in a corset!It's a dress I bought that is a cotton fabric that laces up & looks like a corset! Just decoration pic.twitter.com/hZzZLs04sM

She tweeted, “I would never put my daughter in a corset! It’s a dress I bought that is a cotton fabric that laces up & looks like a corset! Just decoration.” She also posted a video on Twitter showing off the dress: “This dress that I did not design — I actually bought — is not a corset. It’s just fabric on the front that looks like a corset,” she explained while showing the dress at all angles.

She ended the 20-second video by defending the dress. “I think it’s really cute. I bought it from a designer, and it’s just fabric, people, it’s not a real corset.”

As if that wasn’t enough to persuade followers, she posted another tweet a few minutes later of just a photo of the dress with text overlay that reaffirmed, “Just decoration, not a real corset.”

Luckily, it seems like North is none the wiser to the whole thing.

Do you agree with the criticism over North West’s dress? Let us know @BritandCo!

Elyse Roth
Elyse Roth is a freelance writer and editor who is a midwestern transplant in NYC. She loves to explore the city, plus you can find her at a Broadway show or the ballet usually once a week. When she's not finding things to do in New York, she's thinking about where she can travel next. She's combined her love for food and TV into a blog where she makes food eaten on her favorite TV shows at tvdinnerblog.com.
Controversy
Celeb Style
Controversy Kardashians
More From Celeb Style