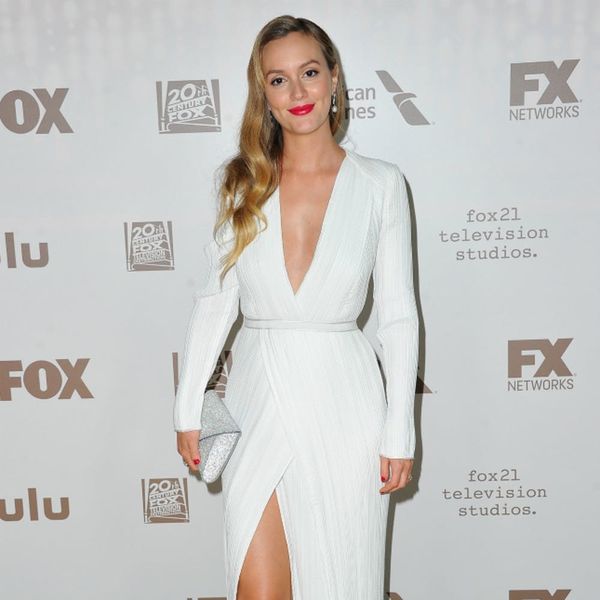 During awards shows, we are generally all fawning over the best and worst dressed lists, pouring over them for a little winter inspiration. Besides the nominees and guests at the show proper, there are boatloads of parties throughout Hollywood where celebs rub elbows, even if they weren’t at the telecast. The main problem with these parties, though, is that we don’t get to see the celebs in attendance usually until the next day. Which is why we’re only now seeing Leighton Meester‘s surprising new look.

Meester arrived at the Fox and Hulu GGs after party super on trend with her plunging white gown, debuting a new, softer blonde look. Her Blair Waldorf Gossip Girl hair appears to be a thing of the past, as she’s traded in the high pony and hairband for soft blonde curls. While this may seem like a shock to many of you, as it was for many of us, it turns out that she was blonde before auditioning for Gossip Girl, but because Blake Lively had already been cast and was “the blonde one,” Leighton was asked to go brunette and the color became her signature look.

Leighton’s out and about promoting her mid-season Fox comedy Making History, which we’re pretty excited about. She plays a colonial woman who’s fallen in love to a time traveling dork who (unbeknownst to her) may have inadvertently stopped the Revolution from happening. We’re both excited for her to be back on TV and are totally digging her new look.

Have you ever changed your hair drastically? Tell us about it @Britandco!

Kat Armstrong
Kat has been a writer, social media maven and mom for longer than she's willing to admit. She's also spent time in front of and behind the camera, interviewing celebs, politicians and acting as a producer for fashion and artistic photography shoots. When she isn't writing for various orgs and publications, she's hanging with her kids, husband and French Bulldog, Peter, in Toronto, Canada.
Celebrity Hair
Most Recent
Celebrity Hair