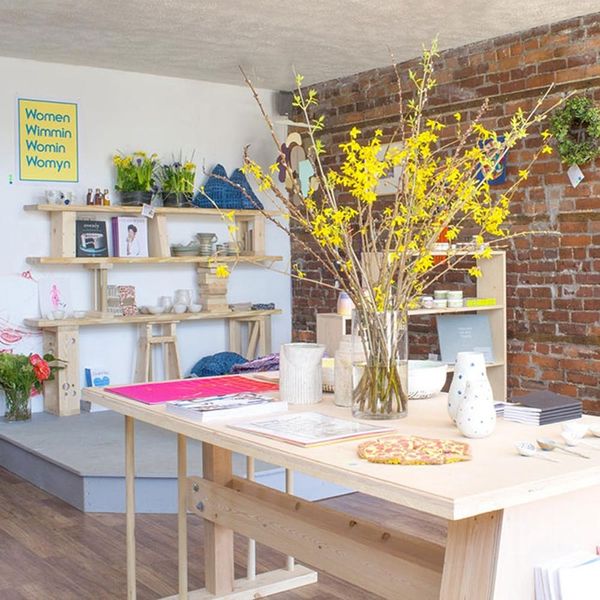 One peek into Elana Schlenker’s Pittsburg pop-up shop, Less Than 100 and we’re already smitten. The sunny space is filled with ceramics, textiles, publications, art prints, stationery and other goodies all created by female artists and makers across the US. But the primary reason we’re obsessed with Schlenker’s boutique actually has nothing to do with what the store is selling. Less Than 100 is a living, working protest for gender wage equality.

The prices in Less Than 100 work like this: if you’re a woman (or identify as a woman) you only pay 76% of the retail price for any product in the shop. If you’re a man, you pay 100%. The discounted rate is relative to what women earn in Pennsylvania compared to men (76 cents to every dollar). In addition to this eye-opening tactic, the store also hosts events surrounding the issue. For instance, next week you can attend a candid conversation with women entrepreneurs on confidence, pricing and self-worth. A few days later, they’re organizing a bus tour around the city that takes attendees around Pittsburg to visit female artists’ spaces. Even if you can’t make it out to the East Coast for these happenings, the store’s Tumblr posts some pretty interesting reads to help keep ladies educated and aware.

It’s that community outreach aspect of the business that makes this initiative even stronger, and Pittsburg won’t be the only city to experience that. Less Than 100’s current location will only be open during the month of April. After that, the space will close and reopen in New Orleans in the fall. In Louisiana ladies will only be required to pay 66% of the retail price. Once that location closes shop, hopefully, a nation-wide tour is in line (and something the people of Indiegogo would presumably help turn from a wish into a reality).

Elana tells us, “I launched the project because I’m tired of reading article after article about the pervasive wage gap and the ways in which women continue to be undervalued in the workplace. I didn’t previously have plans to get involved in this way, but had the idea and felt it could really get people talking about the issue—so I did it!”

Although the store is constantly discounting artisan-made goods, Schlenker is returning 100% of the sales to the current 46 participating makers. Is this a solid business model for a new boutique? No, but that’s not really the point. While the products in the shop are undeniably gorgeous, the actual storefront is simply serving as a vessel to bring light to an issue that needs to addressed and mended. Consider it the prettiest protest the nation’s ever seen.

Have you seen any other inspiring stances for equal pay recently? Tell us about them in the comments below.