19 of the Best Literary Halloween Costumes for Book Lovers 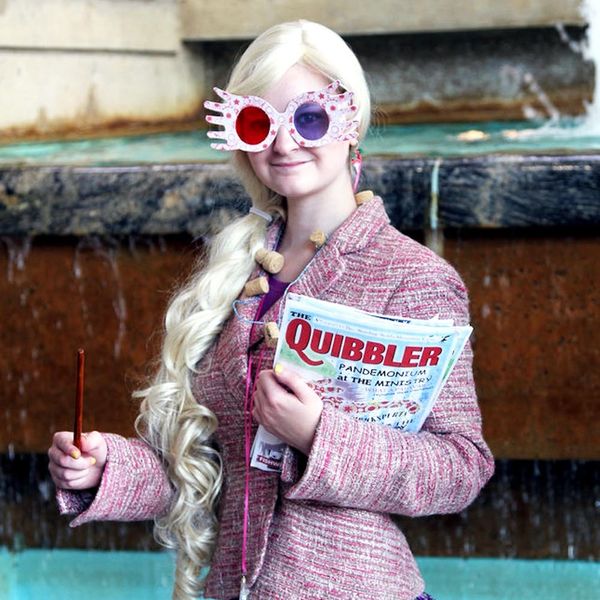 We’re all about coordinating our costumes with our BFFs and channeling our favorite celebs on October 31. But since we’re bibliophiles, it’s also a perfect time to recreate some of our favorite characters from the stories we love. Whether they’re childhood favorites or novellas that scared the heck out of us, we’ve rounded up 19 bookworm-approved literary costumes for your Halloween weekend.

1. Alex from A Clockwork Orange: Before it was a movie that scared the eff out of us, it was a novella that put Goosebumps to shame. For a feminized version of Alex, opt for a white outfit and thick false eyelashes for your bottom lash line. Viddy well. (via Designlovefest)

2. Cruella de Vil from 101 Dalmatians: All good Disney movies were inspired by even better books. This evil villain has her own song and would be oh-so fierce this Halloween. Bonus points if you tote around a cute puppy. (via Brit + Co)

3. Effie Trinket from The Hunger Games: Excuse us while we freak out over this makeup. We’re in love with this interpretation of the bubbly District 12 escort. (via Miranda Hedman)

4. Cheshire Cat from Alice in Wonderland: We’re all mad here. Keep this costume simple with an all-black ensemble and look to this photo for makeup inspiration. (via Deviant Art)

5. Luna Lovegood from the Harry Potter Series: Luna Lovegood is truly a girl after our own heart: creative, fun and a total daydreamer. And admit it — you’d love to get your hands on a copy of The Quibbler and search for nargles. (via Deviant Art)

6. Pippi Longstocking: This nine-year old gal had superhuman strength, a whole lotta spunk and completely insane pigtails. Channel her energy this Halloween with some overalls and a hanger hair hack. (via Brit + Co)

7. Nancy Drew: Chances are, you solved many a mystery alongside Nancy Drew in your childhood days. Why not take a trip down memory lane with a costume this year? Most of these pieces are probably already in your closet! (via Ashley Brooke Designs)

8. Eloise: This Eloise costume is fashioned out of basic pieces that you probably already have. And we’re totally down for any Halloween costume that requires our dog’s participation. (via I Literally DIY)

9. Mad Hatter from Alice in Wonderland: Here’s another nutty character from one of our childhood favorites. With the right hairstyle or wig, this look would be a cinch to pull off. Be sure to brush up on your riddles before getting into costume. (via Brit + Co)

10. Marla and Tyler from The Fight Club: We all swooned over Brad Pitt as bad boy/split personality Tyler Durden, but we also totally admired Marla Singer’s DGAF attitude. This would make an awesome couple’s costume, but Marla is also badass enough to fly solo, don’t you think? (via Carlos Adama Photography)

11. Party Girls from The Great Gatsby: Grab some of your accessories and pile ’em on — you’ve got a party at Jay Gatsby’s to attend. (via Glam Radar)

13. Max from Where the Wild Things Are: We’ve dreamt of being the kings and queens of the Wild Things since we were little. Major bonus: This costume could totally double as a pajama set. If you have a little one who still needs a costume, try this one out instead. (via Flattery)

14. Scarlett O’Hara from Gone With the Wind: Going for something a little more classic? This Scarlett O’Hara costume is all about layers upon layers and effortless elegance. (via LifeLookLens)

15. Madeline: Take a page from Madeline’s style book and opt for this cute, simple costume. That’s all there is; there isn’t any more. (via Classy in the Classroom)

16. Moaning Myrtle from the Harry Potter Series: Who wouldn’t want to dress as Hogwarts’s most captivating ghost? (via Kate Johns)

17. Ms. Frizzle from The Magic School Bus: We all spent some serious time daydreaming about a magical field trip that would take us somewhere amazing. Recreate the magic as the Friz herself. (via Imgur)

18. Fleur Delacour from the Harry Potter Series: You’ll probably encounter a few Hogwarts school uniforms while you’re out and about over Halloween weekend. Do something a little different and go as the It girl of Beauxbatons Academy instead. (via Buzzfeed)

19. Thing 1 and Thing 2 from Cat in the Hat: Cause a little mischief with your BFF with these adorable Dr. Seuss-inspired costumes. Believe it or not, you can hack this costume with a red maxi skirt, paper and a bright blue wig. (via Brit + Co)

What literary figure is your costume of choice? Share in the comments!

Dr. Kenosha Gleaton Teaches Brit Everything She Should Know About Women's Health