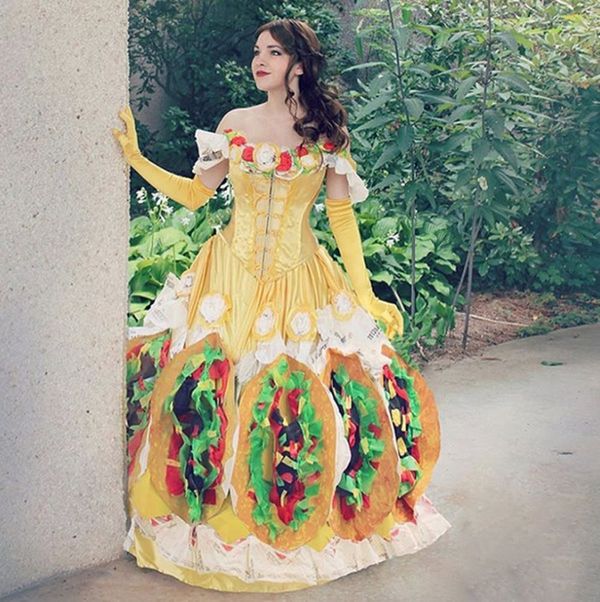 As Halloween begins to loom nearer, we’re already thinking about what we’re going to dress up as this year. And guys, there are some really great options so far. You and your friends could go as the cast of Inside Out or maybe as the ladies from Orange Is the New Black. But if you’re looking for a costume that is going to get you all the LOLZ (or should we say hahas), you should definitely consider trying one of these hilariously punny costumes.

1. Animal Cookie: If this is baby’s first Halloween, use the opportunity for some serious punning! Have one parent dress as an animal, another as a cookie and dress up your baby as a super colorful animal cookie! For the full DIY, head over to this blogger’s site. (via A Joyful Riot)

2. Ginger Bread Man: Embrace those red locks with this hilarious costume that you can buy at the grocery store. (via Reddit)

3. Sixteen Candles: Head to the thrift store and pick out the most ’80s dress you can find. Then cover it with 16 moderately sized candles (or fake candles if you’re going to a Halloween bonfire). Snag this particular dress here.

4. Raining Cats and Dogs: If you’re chill with opening an umbrella indoors, all this easy costume requires is an umbrella, some super glue and stuffed animals. (via CNN)

5. Formal Apology: Because it doesn’t mean anything unless you’re wearing a suit. (via @sarahcrowe27)

7. Bag of Eminems: It’s hilarious and it will literally take you 30 minutes to put together. That’s what we call a win-win situation. (via @candylynn14)

8. Taco Belle: Well that’s it, this one won Halloween before it even started. (via @avantgeek)

9. Fantasy Football: If Dumbledore forgot about quidditch and became a major NFL fan instead, it might look a little something like this. (via @kyle.suba)

11. Kevin Bacon: Grab this hi-larious bacon costume and simply top it off with a name tag that says “Kevin.”

12. Holy Cow and Oh Dear: Are you and your BFF major pun lovers? Do a joint costume with this cute combo. (via Imgur)

13. Anna Winter: Our very own Brit Morin donned this take on a wintery Anna Wintour at Brit + Co’s 2013 Halloween party. Fake snow and an ice cold attitude are required. (via Brit + Co)

14. Deviled Egg ($50): We’re all for the DIY costumes, but if you find yourself in a pinch, here’s one of the best buy-able options.

15. Mer-maid: Combine elements from this costume and this one to make the punniest (and cleanest) costume on both land and sea.

16. Thesaurus: Part dinosaur, part vocabulary expander, this costume is not only hilarious but also educational. (via N00brarian)

17. North West: If you’re a major Kimye fan, here’s a fun way to embrace the family. Make a giant compass necklace and place one celeb’s head on north and one on west and voila! Off to the party you go.

18. Breakfast In Bed: This couples’ costume is sure to get all the laughs at this year’s Halloween party. Have one person dress up like Will Ferrell and have the other throw on this easy pancake costume. (Photo via USA Today)

19. Bun in the Oven: Maternity costume FTW! Dress your bump up as an actual bun in the oven. (via Brit + Co)

20. Pugin’ Spice Latte: I mean, if you’re super stoked about the upcoming fall beverage AND you have a dog, this seems like a must. (via @singalittleflat)

Did you dress up as a pun costume last year? Tell us what it was in the comments below.