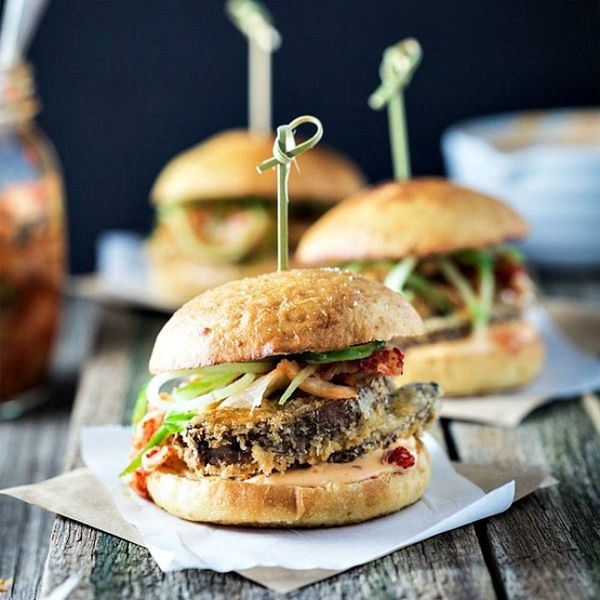 Vegetarians are forever coming up with ways to replace meat in delicious and creative ways. Not only have they attacked meatballs, but they’ve put some successful spins on meaty classics that most believed to be impossible. Due to their heartiness, vegetarians often turn to tofu, tempeh, and legumes like chickpeas in order to fill up and feel good. There are, however, some veggies out there that are meat-y enough to step up to the plate. The mushroom is one of them, and we’ve got 19 dinner recipes that will sate your hunger on Meatless Monday.

The name is a mouthful, which is fitting, because you’re going to want a mouthful. This sophisticated pizza pie is a flavor party, and pepperoni was not invited. (via She Eats)

Ditching beef certainly doesn’t mean ditching thick and juicy burgers for dinner. Robust portobello mushrooms do the trick, and when they’re breaded with a light crisp, you can’t lose. (via My Goodness Kitchen)

This fabulous curry brings such an aromatic mix to your table that it might make your other dinners look a little sad. Luckily, this dish is easy to make, so you can throw it down on the regular. (via Cook Republic)

This recipe is confirmation that mushrooms can do anything. Seared to perfection and slathered with a homemade teriyaki glaze, these ‘shrooms prove that they’re “kings” for good reason. (via Olives for Dinner)

Pot pies are a necessity throughout the cold and drab winter months, and those on a plant-based diet shouldn’t be left deprived. An assortment of hearty veggies, including meaty cremini mushrooms, bring depth to this cozy option. (via Natural Girl Modern World)

These flavor-packed tacos are pure perfection for both #MeatlessMonday and #TacoTuesday. So choose wisely — or just make them two nights in a row! (via Half Baked Harvest)

Ladies and gents, this right here is the “meat and potatoes” of the vegan world. Velvety polenta is topped with saucy mushrooms to throw you into a state of pure comfort food bliss. (via Connoisseurus Veg)

Crisp veggies and meaty mushrooms are stuffed into tender rice paper to give you a healthy dinner option that is a cinch to make. (via Cake and Beans)

Turn your usual spaghetti and meatballs into spaghetti and cheatballs. Lentils and mushrooms are rolled together to create the perfect veg-friendly version of this Italian fave. (via Oh My Veggies)

A stir-fry is an amazing go-to, especially on those weeknights when you’re completely stumped for dinner ideas. The next time you find yourself in such a pickle, give this wholesome recipe a spin. (via Eat Healthy Eat Happy)

Cauliflower and mushrooms are a common meat substitute in vegetarian cuisine due to their heartiness. This dish brings its A game by including both ingredients in a mouth-watering curry. (via The Culinary Tribune)

If you love digging into a dinner that is everything saucy, tangy, and fulfilling, this recipe needs to be added to your rotation stat. Spaghetti squash is tossed with “beefy” mushrooms and briny olives to give your tastebuds an optimal treat. (via Spice and Sprout)

This fantastic brown rice pilaf is super flexible and can be dished up as a main or a side. It’s packed with nutrition while also being vegan and GF. (via Yay! For Food)

If you want to change things up from the usual portobello burger, whip up some tasty patties with chopped mushrooms instead. These ones incorporate cooked farro, beans, and oats into the mix for a little extra oomph. (via The Ranger’s Daughter)

This veggie-fied spin on the bourguignon could give the beefy French classic a run for its money. Filled with rich and savory flavors, this recipe gives us the belly-warming sensation we crave with seitan, beans, and mushrooms. (via Emily Honeycutt)

This is the real deal, y’all. Rich cashew cream is tossed with noodles and mushrooms to create a stroganoff that rivals its meaty forerunner. (via Connoisseurus Veg)

You might be wondering how on earth this Italian dish could be transformed into vegan goodness, but it’s easy. A medley of wild mushrooms replaces the usual ground meat, while Italian herbs and vegan cheeses add the richness we crave. (via Euphoric Vegan)

This glorious and flaky pie is stuffed to the brim with vegetable goodness. It’s also adaptable, so you can add whatever other veggies you want in order to clean out that crisper! (via Kale Yeah It’s Vegan)

If you’re a bangers and mash purist, you’re probably sitting there thinking, “Oh no, they didn’t.” But we can assure you that yes, they did, and it’s the best thing ever. (via The Veg Space)
Dana Sandonato
Born in Canada and now living in the beautiful state of North Carolina, Dana is a coffee-reliant food writer with a healthy appetite, a taste for culinary adventure, a thirst for good beers, and an endless hunger for food photography. When not writing for Brit + Co, she can be found pouring herself into her blog-turned-webzine, Killing Thyme, or taste-testing at local breweries with her husband. Dana's ideal down time includes pizza, marathoning on Netflix, or watching her fave flicks from the 80s and 90s - no matter how great or awful they are!
Dinner Recipes
Healthy Eating
Dinner Recipes Healthy Recipes recipe roundup Vegetarian Recipes
The Conversation
Reviews:
More From Healthy Eating