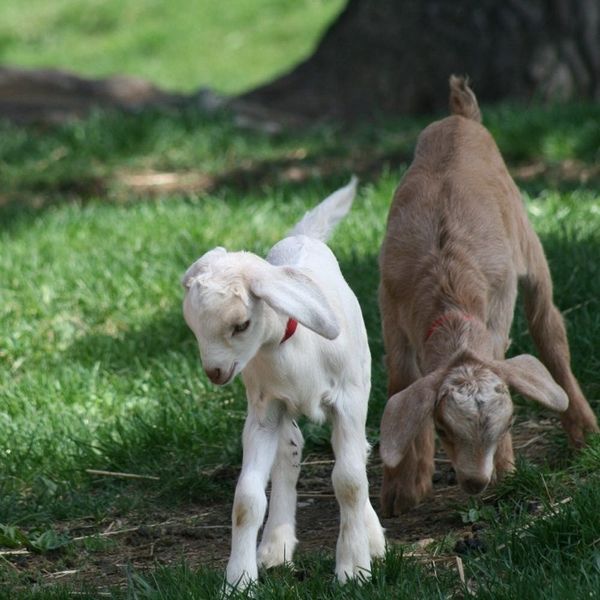 The thought of heading to a farm where you could spend days playing with furry animals and frolicking in open fields is quite tempting. Luckily, that fantasy is more realistic than ever. And you don’t even have to give up your current life to make it happen! (Unless you want to, of course.) Idyllic homesteads all over the country are opening their doors and welcoming guests to pitch in with chores and disconnect from the pressures of daily life. Working on vacation sounds counterintuitive, but it’s been proven that animals and physical labor can reset your mind like nothing else. So, whether you’re craving a totally down-and-dirty barn experience this summer or prefer your #farmlife with a side of luxury, there is a place for you. Keep scrolling to find your pastoral bliss.

1. Asgaard Farm & Dairy, Au Sable Forks, NY: Shack up in the Adirondacks at the former home of artist Rockwell Kent, who drew inspiration from the region to create his iconic moody landscape paintings. Earn your keep by feeding the animals, collecting eggs from the chicken coop, and milking the goats that supply the farm’s award-winning chèvre. Then, pull from the stock of grass-fed beef and organic produce to throw a picnic party for you closest friends. At the very least, do yourself a favor and stop by during one of Asgaard’s Kidding Days, when you can pet and play with the baby goats. (Photo via Asgaard Farm & Dairy)

2. Philo Apple Farm, Forestville, CA: Stay in one of Mendocino County’s last remaining orchards, where you can flex your cooking chops alongside the family who founded the lauded Thomas Keller restaurant, French Laundry, and opened this farm-inn-country store in the ’90s. Choose from a handful of charming cottages and mingle with the four generations that work and run the land, eager to school you in the art of agricultural living. And if by the end of your time there, you don’t want to leave (no one will blame you), you can always sign up for Philo’s live-work program. (Photo via Philo Apple Farm)

3. Bliswood Bed & Breakfast, Cat Spring, TX: If you’re more into riding than farming, trot straight to this bluebonnet-filled, Texas Hill Country inn known for its equestrian facilities. Spread across 500 acres, Blisswood has 12 charming cottages where you can spend the night with the family of bison, deer, donkeys, peacocks, and border collies that also call the area home. Explore the land on horseback, before heading to the river for some fishing, or try your hand at archery and trap shooting. Next stop: Downton Abbey. (Photo via Blisswood Bed & Breakfast by Skeeter Hagler)

4. Blackberry Farms, Walland, TN: With its storybook farmhouses, rolling landscape, and Smoky Mountain views, Blackberry is the very definition of Southern gentility. But like any place where you’re meant to get a little dirty, it has a sultry edge too. Maybe that’s why Sports Illustrated picked it as the site for its “Swimsuit Issue” cover two years ago. As you can imagine, the rates aren’t cheap (these guys supply Williams-Sonoma, after all), but you’ll feel like old money while strolling the grounds, picking veggies, learning how truffle dogs are trained, and nibbling from the fromagerie. (Photo via Relais Chateaux)

5. Starlight Llama Bed & Breakfast, Florence, MA: One of the first things you notice when you head toward pastoral lands is how bright the stars are when you leave the polluted city behind. At Starlight, the skies are so clear, the entire B&B can easily run off solar power. Llamas are the main attraction — but you’ll also meet chickens (they supply the eggs for the addicting breakfasts), peacocks, and the owners’ pet pugs. The rooms are simple but quaint — just like (someone’s) grandma’s house — and there is plenty of space to roam and explore without interruption. (Photo via Starlight Llama)

8 Scenic Campgrounds Where You Can Sleep Right on the Beach