Having a Pet Could Make Your Baby Healthier 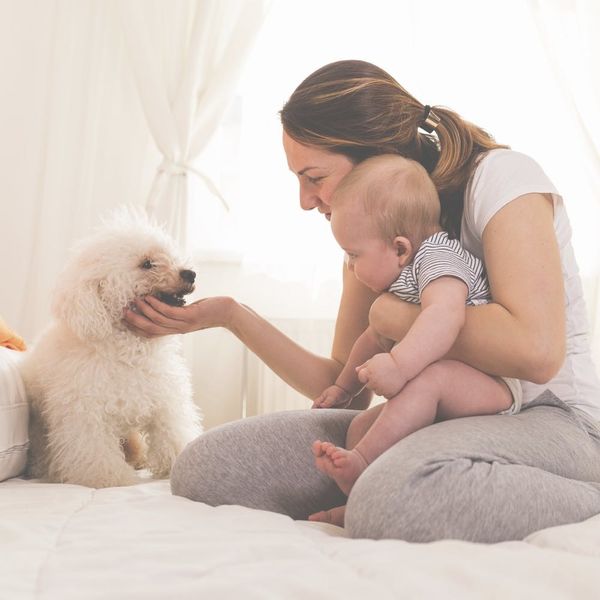 You and your furry BFF are partners 4 EVA. Your pup has been there for every stage of your life, from your paw-dorable pet proposal to your creative pregnancy announcement and all the holiday photos and Halloween costumes in between. So when you get them a new partner in crime — AKA a new baby — it’s natural to stress about how they’ll get along. Now science is giving you one less thing to worry about. A new study from the University of Alberta says pet exposure early in life could be associated with lower risks of allergies and obesity.

While it’s easy to dismiss the piles of smelly diapers your new bundle of joy is generating, it turns out those stink bombs could be the scene of some fascinating scientific discoveries. According to the new study published in Microbiome, researchers from the University of Alberta discovered higher rates of two types of microbes — Oscillospira and Ruminococcus, to be exact — in babies from families with pets. Why are these microbes so significant? They are associated with lower risks of childhood atopy (allergies and asthma) and obesity.

The researchers examined data and samples (… AKA poop) from 746 infants through the Canadian Healthy Infant Longitudinal Development, and then followed up this research with a pilot study of 24 infants. Surprisingly, they discovered that direct pet exposure isn’t the only way infants can reap these microbe benefits. It turns out the microbes can also be shared indirectly, from the mother to the unborn baby, during pregnancy and the first few months of a baby’s life.

If you’ve got a baby and no pup… yet, there’s still time! According to these researchers, the small but critical window of exposure is during an infant’s first two years of life. Time to book some extra snuggles for you, your baby, and your fur baby!

What’s the craziest thing you’ve done in the name of puppy love? Tweet us @BritandCo and let us know!

Angela Velez
Angela is an MFA Fiction candidate at the University of Pittsburgh. You can find her reading obsessively, wandering bookstores and watching melodramatic television.
Halloween
Health
Halloween Parenting study
More From Health