12 Quotes from Madonna That Will Make Your Rebel Heart Sing 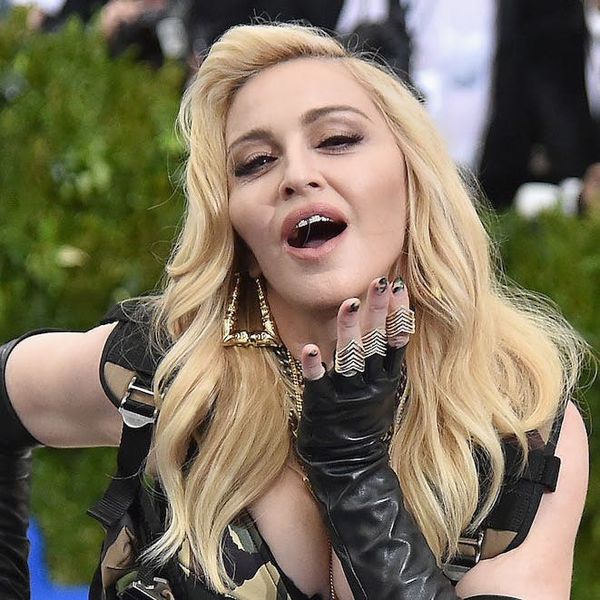 There's no one in the world like Madonna. More than three decades after she released her first album, Her Madgesty is still the reigning Queen of Pop — and she shows no signs of giving up her crown anytime soon. She's an icon, now and always, not just for her many chart-topping hits but also for her fierce and fearless attitude.

Madonna is proof that the best thing you can be in life is yourself. So in honor of her 60th birthday this year, we rounded up 12 of her most empowering quotes. (Photos via Jason Merritt/Getty Images + Mike Coppola/Getty Images for People.com + Elisabetta Villa/Getty Images + Gareth Cattermole/Getty Images)

On daring to be different: "Growing up in a suburb in the Midwest was all I needed to understand that the world was divided into two categories: people who followed the status quo and played it safe, and people who threw convention out the window and danced to the beat of a different drum," she told Harper's Bazaar in 2013. (Photo via Kevin Winter/Getty Images)

On aging: "Women, generally, when they reach a certain age, have accepted that they're not allowed to behave a certain way," she told Rolling Stone in 2015. "But I don't follow the rules. I never did, and I’m not going to start." (Photo via Win McNamee/Getty Images)

On success: "I owe my continued success to several attributes — discipline, focus, tenacity, willingness to compromise and collaborate, patience, and commitment," she told Parents.com in 2005, noting that those values "can all be applied to parenting," too. (Photo via Gareth Cattermole/Getty Images)

On being a role model for her kids: "Being married and having children made me realize how making the world a better place starts at home," she told Parents.com in 2005. "The best way to teach them about sharing and giving is to do those things myself and set an example." (Photo via Kevin Winter/Getty Images for iHeartMedia)

On her purpose: "I hope I've been given the label of teacher. That's how I see myself now," she told Oprah Winfrey in 2004. "Inspiring people and sharing what I've learned — that's the most important thing. It's what I was put here to do. All my fame and fortune have led to this one understanding: That I'm here to help people." (Photo via Sean Gallup/Getty Images)

On what she wants for her children: "A lot of people say to me, 'You must really want your son to be a successful soccer player, your oldest daughter [Lourdes] to be a dancer, Rocco to be a painter,'" she told Vogue Italia in August 2018. "And I always say no, what I want my children to be is loving, compassionate, responsible human beings. That's all I want. I don't care what the vehicle is, I just want them to be good human beings that treat other human beings with dignity and respect, regardless of skin color, religion, gender. This is the most important thing, you know what I mean?” (Photo via Elisabetta Villa/Getty Images)

On being proudly "not cool" (although we dare to disagree): "Growing up, I didn't feel cool, I didn't fit into any crowd," she told Rolling Stone in 2009. "'Geek' is not a word anyone uses to describe me, though, except perhaps [Confessions on a Dance Floor producer] Stuart Price, who once said, 'You know, you're a nerd at heart, nobody knows it.' I took it as a compliment. I'm silly and geeky and nerdy and not cool." (Photo via Mike Coppola/Getty Images for People.com)

On staying young: "I don't think about an approach to aging. I just think about my approach to life. I don’t do anything different than I used to do," she told The Cut in April 2018. "I keep going. I continue being creative and working. I write, travel the world, am adventurous, curious, learn, and I seek knowledge. I listen to my children, I pay attention to them, and I see the world through their eyes. All those things keep you youthful."(Photo via Nicholas Hunt/Getty Images for Billboard Magazine)

On supporting other women: "We live in a world where people like to pit women against each other," she told Rolling Stone in 2015. "And this is why I love the idea of embracing other females who are doing what I'm doing." (Photo via Rob Carr/Getty Images)

On her motivation: "Wanting to inspire people. Wanting to touch people's hearts to get them to look at life in a different way," she told Harper's Bazaar in 2017. "To be a part of evolution, because, for me, it's either you're part of creation or you're part of destruction. It's inexplicable; it's like breathing, and I can't imagine not doing it." (Photo via Dimitrios Kambouris/Getty Images)

On the lessons she hopes to teach her children: "That there's no such thing as fragmentation — we're all connected and responsible for one another," she told Oprah Winfrey in 2004. "Also, you can want all the things in the world, go for it, ask for everything in life, but it should be for the sake of sharing." (Photo via Jason Merritt/Getty Images)

From Your Site Articles
Desiree O
Desirée O is a ‘Professional Bohemian’ who loves anything and everything related to the arts, entertainment, and pop culture. She ADORES being a ‘Newsy’ for Brit + Co, covering all of the latest tidbits of awesomeness that you want to read about. When she’s not writing, she’s either making messy art, going on long adventurous walks with her camera, or poking around over at bohemianizm (http://www.bohemianizm.com/). You can find out about Desirée O and her work at http://DesireeO.com/ or follow her on Twitter @DesireeO.
Celebrity
Pop Culture
Celebrity