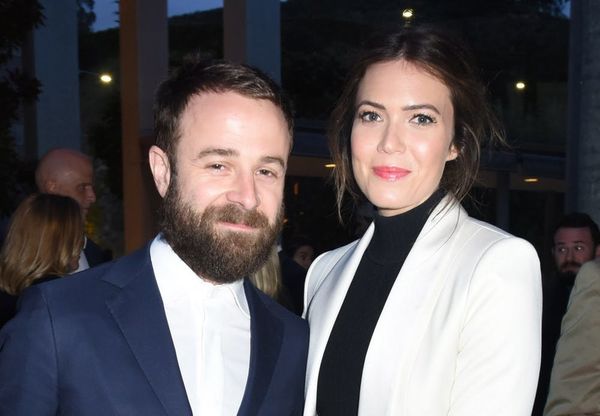 Congratulations are in order for Mandy Moore! The This Is Us actress wed Dawes singer-songwriter Taylor Goldsmith on Sunday, November 18, in a private ceremony in Los Angeles, People reports.

The couple said “I do” at home in front of a group of around 50 guests, including Minka Kelly, Wilmer Valderrama, and the bride’s This Is Us costars Milo Ventimiglia, Chrissy Metz, and Sterling K. Brown. Moore reportedly wore a pink Rodarte wedding gown and veil for the occasion.

Moore first met Goldsmith via social media. “I took a picture of their album and posted it on Instagram,” she told People in October 2017. “Somehow, Taylor saw it and sent a note to me. We started emailing back and forth, then we went on a date, and the rest is history.”

That history included an engagement in September 2017. “She just sent out an alert over our family text chain,” costar Chris Sullivan told Entertainment Tonight at the time. “She just sent a photo and just wanted us all to know that this just happened, and so then we went on a response spree for about a day and a half.”

Not long after, Moore debuted her elegant engagement ring on the red carpet. “I’ve never been someone who wears a lot of jewelry,” she told InStyle of the new bling. “It’s fun to get dressed up and wear gorgeous pieces for work, but in my real life, I usually just put on a pair of studs.”

She had a similarly minimalist vision for their wedding. “I’ve never been the girl that wanted to wear a white dress,” she told Us Weekly last year, adding that she wanted to keep the ceremony small and intimate. “No judgment, but it’s not for me. … No bridal magazines for me.”

As for her relationship with Goldsmith, she opened up to Glamour about their love in an interview just last month. “He makes me melt. I can imagine no better partner,” she told the mag. “He’s going to be the most tremendous father. I view the past as a stepping-stone to get me where I am today. I would gladly weather all of that a million times over if it brought me to Taylor again.”

Congrats to the newlyweds!