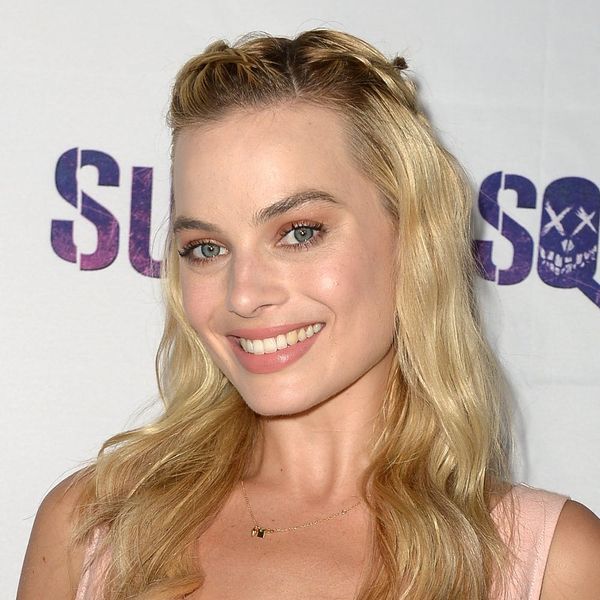 Margot Robbie is feeling the magic these days, and it’s really starting to show. The actress, who just revealed that she’s texting buddies with Prince Harry, is riding high on a wave of starring roles and red-carpet appearances, the latest of which had her stepping out wearing a unicorn. Yep, a unicorn!

She appeared last night at the world premiere for Suicide Squad to promote her role as the wild and wonderful Harley Quinn. Not one to be outdone by her character, the 26-year-old celeb showed up in a full-length black McQueen dress with one sheer sleeve and a high-collared neck. But it was the gold detail that was the focus of the gown — and that detail was a unicorn. A shimmery gold unicorn.

The whimsical garment was chosen from the Fall 2016 Alexander McQueen collection, and when Margot turned to give fans and photogs a view of the back, we got a glimpse of the creature’s wings as proof that this mythical beast is of the flying variety. The dress seemed just about perfect for such a world-class event.

Paired with a rick dark red lipstick and her blonde hair pulled back low and loose, it was a look that was worthy of Harley herself.

Do you love or loathe Margot Robbie’s unicorn dress? Tweet us @BritandCo!

Desiree O
Desirée O is a ‘Professional Bohemian’ who loves anything and everything related to the arts, entertainment, and pop culture. She ADORES being a ‘Newsy’ for Brit + Co, covering all of the latest tidbits of awesomeness that you want to read about. When she’s not writing, she’s either making messy art, going on long adventurous walks with her camera, or poking around over at bohemianizm (http://www.bohemianizm.com/). You can find out about Desirée O and her work at http://DesireeO.com/ or follow her on Twitter @DesireeO.
Celebrity Style
Celebrity News
Celebrity Style Dresses
More From Celebrity News