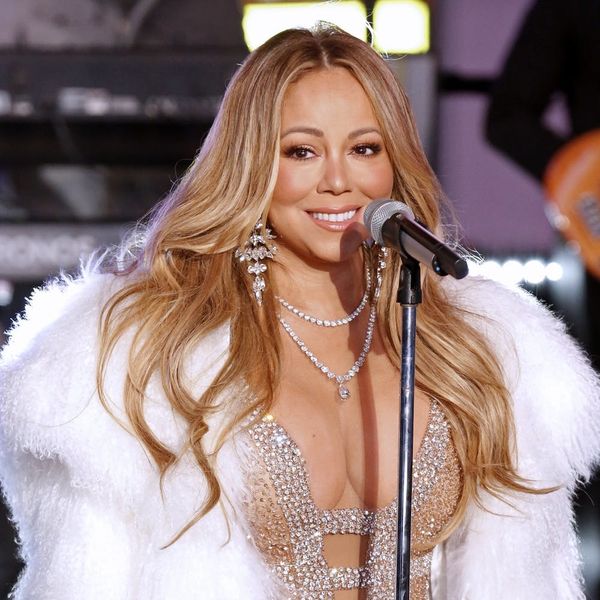 The pressure was on for Mariah Carey last night. Just before the stroke of midnight, the legendary singer hit the stage as the world watched with bated breath to see whether or not the music diva would have a repeat of last year’s disastrous NYE performance (newsflash: She didn’t). She DID, however, manage to spark 2018’s very first meme, with an onstage moment that had us LOL-ing instead.

As we nervously awaited to find out the fate of the New Year, with many speculating that her performance would be a tell-tale sign of how 2018 would go overall, Carey remained cool as a cucumber (literally — it was reportedly 9 degrees with a minus 4 wind chill).

Mariah Carey's New Year performance is like the groundhog of how the year will go.

As it turns out, we had no reason to be anxious, nor did Ryan Seacrest: Not only did girl straight up SLAY two of her biggest hits, 1990’s “Vision of Love” and 1993’s “Hero,” live, climaxing with a round of high notes backed up with a choir that sent actual chills down our spine, she also had an unforgettable, standout moment involving a certain hot beverage, when, around the 2:39 mark in the video below, she stopped to ask for a sip of hot tea.

“I’m just gonna take a sip of tea if you’ll let me,” the 47-year-old quipped. “They told me there would be tea. Ugh. It’s a disaster — okay. Well, we’ll just have to rough it. I’m gonna be just like everybody else with NO hot tea — but we’re gonna try and do this one for you, because I just want to show my appreciation for everyone who speaks out for justice, and tries to make the world a better place.”

And now the Mariah Carey hot tea will be the first meme of 2018. pic.twitter.com/wN4KITyBlj

The first time life throws you a curve in 2018 just remember: Mariah Carey made it through without her hot tea. You can make it through too.

Compared to last year’s disaster, Mariah Carey did a good job tonight. now someone get her some hot tea! ☕️ #NewYearsEve2017

Compared to last year’s disaster, Mariah Carey did a good job tonight. now someone get her some hot tea! ☕️ #NewYearsEve2017

I’m only drinking hot tea in 2018 @MariahCarey! I love you and Happy New Year!

Mariah Carey successfully sued a man for wasting her time in 2017. Of course she is gonna ask for hot tea in 6 degree weather live on stage. We should all be Mariah Carey.

Not to be outdone, the Queen herself got in on the joke, posting, “Found my tea!” post-performance.

What did you think of Mariah’s NYE performance? Sound off over @BritandCo.

Nicole Briese
Nicole is the weekend editor for Brit + Co who loves bringing you all the latest buzz. When she's not busy typing away into the wee hours, you can usually find her canoodling with her fur babies, rooting around in a bookstore, or rocking out at a concert of some sort (Guns N' Roses forever!). Check out all her latest musings and past work at nicolebjean.com.
Celebrities
Celebrity News
Celebrities Music NYE social media twitter
More From Celebrity News