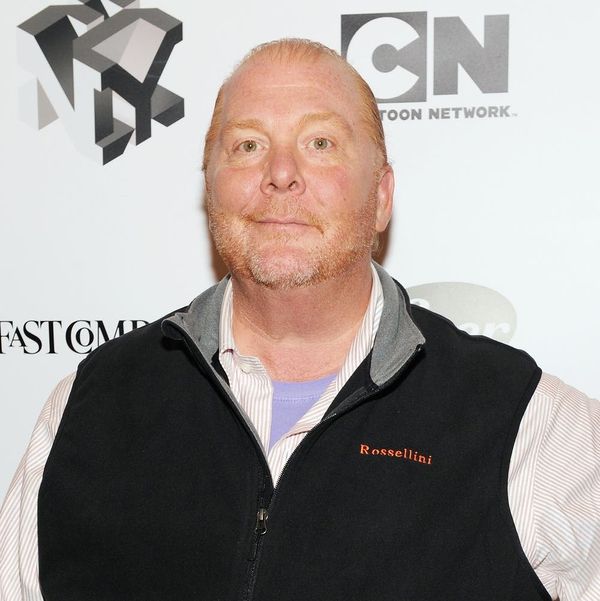 Chef, Food Network star, and co-host of ABC’s The Chew Mario Batali is the latest in a long line of celebs on the receiving end of allegations of sexual harassment and/or assault to surface in recent weeks. For Batali, the accusations come a few short years after the chef was found guilty of skimming tips from staff at his famous NYC restaurant group, Batali & Bastianich Hospitality Group, and their reveal sees the chef stepping down from his work both in his restaurants and on his ABC daytime talk show.

Batali’s career blossomed from a New York restaurateur to television star in the mid-’90s with his Food Network show, Molto Mario and gained him a crew of celebrity followers that included Gwyneth Paltrow. According to food magazine Eater, it was his time as head chef at the now-closed Pó that saw the Croc-wearing pasta maker first behaving inappropriately towards staff members.

Steve Crane, Batali’s partner at Pó confirmed to Eater that multiple staff members at the restaurant accused their former boss of using explicit sexual language, as well as unwanted physical touch, while they worked alongside the chef in the kitchen. No charges were brought about at the time, and Batali eventually left to start his celebrity chef empire.

“I made it very clear to him that he needed to stop, but I feel ashamed that this happened at Pó, and my staff endured this behavior,” Crane told the magazine, adding that as business partners, Crane did not have the ability to fire Batali.

As recently as this past October, a former staff member at one of the Batali & Bastianich restaurants filed a formal complaint against Batali, who was reprimanded and made to undergo sensitivity training by his colleagues. Company representatives also told Eater that the company will be hiring a third party investigative firm to allow for staff at the 24 B&B owned restaurants to come forward safely if they, too, have allegations against Batali or anyone else at the company.

“We take these allegations very seriously. We pride ourselves on being a workplace for our employees where they can grow and deliver great service with equal opportunity and free from any discrimination. We have strong policies and practices in place that address sexual harassment. We train employees in these policies and we enforce them, up to and including termination,” B&B’s statement to Eater says. “Mr. Batali and we have agreed that he will step away from the company’s operations, including the restaurants, and has already done so.”

Besides harassment of his staff, a female chef (who wishes to remain anonymous) that has never worked with or for the talk show host told Eater about an encounter with the star a decade ago, where she says Batali groped her with his bare hands after she spilled wine on herself at an event. The chef believes Batali was drunk at the time.

ABC has also removed Batali from his show, The Chew, which is a hybrid cooking show and daytime talk show. In a statement, the network said, “we have asked Mario Batali to step away from ‘The Chew’ while we review the allegations that have just recently come to our attention. ABC takes matters like this very seriously as we are committed to a safe work environment. While we are unaware of any type of inappropriate behavior involving him and anyone affiliated with the show, we will swiftly address any alleged violations of our standards of conduct.”

In response to allegations, Batali spoke to ABC, telling the network, “I apologize to the people I have mistreated and hurt. Although the identities of most of the individuals mentioned in these stories have not been revealed to me, much of the behavior described does, in fact, match up with ways I have acted.”

“That behavior was wrong and there are no excuses,” Batali’s forthright apology said. The chef also accepted full blame, saying, “I take full responsibility and am deeply sorry for any pain, humiliation or discomfort I have caused to my peers, employees, customers, friends and family.”

What do you think of the allegations against Mario Batali? Tell us @BritandCo!

Kat Armstrong
Kat has been a writer, social media maven and mom for longer than she's willing to admit. She's also spent time in front of and behind the camera, interviewing celebs, politicians and acting as a producer for fashion and artistic photography shoots. When she isn't writing for various orgs and publications, she's hanging with her kids, husband and French Bulldog, Peter, in Toronto, Canada.
Celebrity
Current Events
Celebrity Controversy
More From Current Events